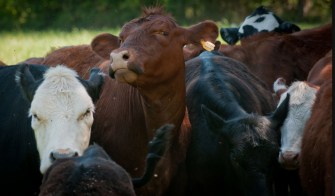 Cattle graze on grass at the Tuckahoe Plantation, in Goochland County, VA area on Thursday, May 5, 2011.

against ABC News in September seeking $1.2 billion in actual damages. The lawsuit is based on what BPI legal counsel called a “long-term, sustained, vicious attack” by ABC against BPI’s product.

The March 2012 ABC News coverage of the product focused on the process in which ammonium hydroxide gas is introduced to the meat. The news broadcast referred to lean finely textured beef as “pink slime” and questioned the safety of the product. The ABC News report also featured information about major grocery retailers that sold ground beef with lean finely textured beef .

Prior to this coverage BPI produced and distributed approximately 5 million pounds of product weekly. This accounted for roughly 75 percent of the market of lean finely textured beef. In the 28 days following the broadcast production decreased to 1.6 million pounds per week. Sales went from $8.9 million to $3 million weekly, according to the lawsuit file in South Dakota Circuit Court.

Through “defamation by implication” ABC News led consumers to believe lean finely textured beef is not safe, not nutritious, not meat or beef, and BPI took part in improper behavior in working with the U.S. Department of Agriculture, said Dan Webb, lead attorney for BPI, during a Sept. 13 press conference. He also said that BPI is seeking damages due to “wrongful interference with business relationships” by ABC News.

In the March report ABC News created a “blacklist” a major grocery store chains that carried BPI’s product. Following the report, as grocery stores would announce discontinuing the sale of BPI’s product, the store would be taken off the “blacklist” and moved to the “good” list.  Stores that discontinued the sale of ground beef with lean finely textured beef included: Safeway, Supervalu, Food Lion, Kroger, Wal-Mart, ALDI, BI-LO, Winn-Dixie, Giant Eagle, Save Mart and Stop & Shop, according to the lawsuit.

In a statement during the Sept. 13 press conference, Craig Letch, director of food safety and quality assurance for BPI, said that the news coverage was not the result of a foodborne illness or safety issue. He added that BPI goes to considerable effort to ensure the quality of its product.

In the last 10 years BPI has had one Class I recall; that was in February 2002. Approximately 131,000 pounds of beef patties were recalled, according to the U.S.D.A. Food Safety Inspection Service documents.

“A logistical problem led to 13 boxes of lean trim that had tested positive for pathogens to be shipped to a customer instead of to a rendering plant,” said Letch in a statement to Gateway Journalism Review. “As soon as BPI officials discovered the boxes were gone, they called the customers, which commenced a recall. There were no illnesses associated with the product.”

While BPI is a major producer of lean finely textured beef it is not the only producer. Cargill Meat Solutions, based in Kansas, and AFA Foods, Inc. based in Pennsylvania also produced a substantial amount of the product prior to the March ABC News coverage.

In April, AFA announced filing Chapter 11 bankruptcy. The company had been working to restructure debt prior to the spring news fury, but could not get paperwork in order before being hit with a slump in demand, according to an L.A. Times article. AFA facilities across the country were shut down.

One such plant in Texas was bought by competitor Cargill at a reduced rate. Cargill plans to continue using the facility for ground beef production.

Unlike BPI that uses ammonium hydroxide to increase the pH level of ground beef to prevent pathogens, Cargill uses a process involving citric acid. Perhaps this is the reason the majority of media attention has focused on BPI and not Cargill.

The contaminated meat involved in the July 2012 recall did result in several people becoming sick.