Critics of Monsanto - and they are legion - demonize the company for seizing control of food production technology and undermining the tradition of seed-saving in agriculture. 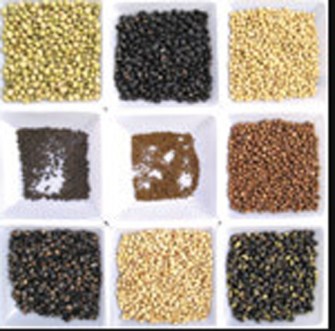 USDA’s Soybean Germplasm Collection housed at the University of Illinois is one of 30 germplasm collections that are part of the National Plant Germplasm System.

Monsanto's agents - called the "seed police" by some farmers - arrive on a farmer's doorstep when they get a tip about cheating or when their figures show that a farmer hasn't bought enough seed to account for all of the crop he is harvesting.

That's how the lawsuit in the U.S. Supreme Court involving Monsanto patent rights began. Vernon Hugh Bowman says the Monsanto agents who arrive at his southwest Indiana farm seven years ago were polite and inquisitive. But Bowman was insistent he was doing nothing wrong.

For six or nine months after the Monsanto agents visited Bowman, they sent him letters proposing settlements and threatening suit. Bowman was fed up. Monsanto said it had not authorized Bowman to use seeds from the local grain elevator to grow a crop of soybeans. Bowman threw the language right back.

"I said I'm not authorizing you to write me a letter. If they are suing people like that who they don't have a bit of reason to sue, I'm not going to give into them. I think they have overreacted and used some practices for the sole practice of scaring farmers. They have used some tactics that I would consider mafia-like. They didn't do any mafia-like things to me ... but when i hear what they've done, I consider it inappropriate."

The Center for Food Safety, a Washington group that has persistently criticized Monsanto’s enforcement of its patent rights, reports that as of the end of 2012 Monsanto had filed 142 seed patent infringement lawsuits affecting 410 farmers and 56 small farm businesses in 27 states. Monsanto won 72 judgments for about $23.5 million. Many cases are brought in federal courts in St. Louis because of the forum selection clause in Monsanto’s technology agreement. The center says this gives the company a “hometown” advantage.

Monsanto maps showed that the company filed a large number of cases against farmers in northern, central and southeast Missouri and throughout most of Illinois. Other states where Monsanto has collected large sums are the Carolinas, Indiana, Minnesota, Iowa, Kentucky, the Dakotas, Michigan and Ohio.

Monsanto posted a five-part series written in 2008 explaining how it handles tips that a farmer is violating its agreement with Monsanto.

It runs a toll-free telephone hotline that receives anonymous tips from farmers about their neighbors. The numbers is 800-768-6387.

Scott Baucum, then Monsanto trait stewardship lead, explained that “people in small communities … do not want to get involved. So we provided a dignified way for them to call in and say, ‘Hey, I’m paying for this technology and I think somebody else ought to have to pay for it, too. It’s not fair to me that I have to obey certain rules and they don’t.’”

Lockhart added, “People need someone to call. They just can’t sit and stew about it. A lot of people that call have that personal sense of ethics that a line has been crossed. I feel really good about what I do; I don’t do this because I enjoy putting people on the spot or having investigators go out and check them. I’m helping to make the playing field fair.”

After getting a tip, Monsanto looks at the data in its records to see if a farmer is buying enough seed to cover all the acres farmed.

If Monsanto opens an investigation, the website said, it sends its information to Larry McDowell, owner and manger of the St. Louis-based investigative firm McDowell & Associates. McDowell’s investigators go to the farmer’s front door.

One investigator is quoted as saying: “The first and most important thing that we like to do when we get there is let them know who we are, who we work for, and the most important reason that we’re there, which is to talk to them about their farming operation and the possibility of saved Roundup Ready soybeans being planted on their farm.”

About half the farmers readily admit to saving seed and infringing on the patent, Monsanto said. Many others who deny it at first, later admit the infraction during follow-up interviews. Monsanto said it then tries to work out a settlement the farmer can manage.

Monsanto said it went to trial over seed patents just nine times from 1997 to 2008. It said it filed 145 lawsuits in 15 years of seed patent enforcement, and almost 700 matters have been settled out-of-court.

“Most of the cases are never filed,” said Baucum. “Most of the time we find that we’ll go knock on the farmer’s door and he’ll say, ‘Yeah, you caught me. Let’s get it behind us.’ And we just settle it with them.”

Monsanto says it gives the money it collects from farmers to the Commitment to Agriculture Scholarship affiliated with the American Farm Bureau. Over seven years the company gave $900,000 that went to 650 young people, it said.