More than half of what Iowans dump into landfills could have been recycled or composted. In some areas, that amount is as high as 75 percent, landfill operators said.

An IowaWatch investigation revealed that the gap between tons dumped into the ground and tons recycled at Iowa’s top five waste agencies is widening.

And unless something changes, it’s set to stay that way because of a lack of available recycling programs, the way recycling and landfill programs are funded by the state, and poor record keeping. 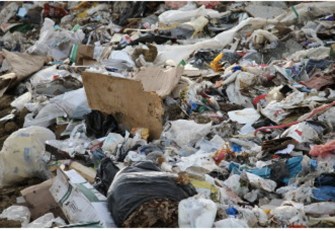 It’s not hard to see wood, papers, cardboard and some other recyclables mixed in the garbage at the Iowa City Landfill

Reo Menning, public affairs director with the Metro Waste Authority located near Mitchellville, explains bluntly: “If recycling doesn’t happen, landfills will fill up faster, and the cost for garbage will go up.”

A little more than 2.86 million tons of trash were dumped in landfills across Iowa in fiscal 2012, which ended June 30. That’s about the same as the previous year’s amount. The Iowa Department of Natural Resources’ yearly landfill tonnage reports reflect no dramatic decrease or increase in total tonnage over the past 10 years.