The push by the agriculture industry to restrict free speech and access to information is increasing, with at least seven more states considering farm protection laws – also, known as “ag-gag” laws.

Since the 1990s, the agriculture industry has used various pieces of state-level legislation such as “Farm Protection” and “Agriculture Disparagement” laws to limit media. 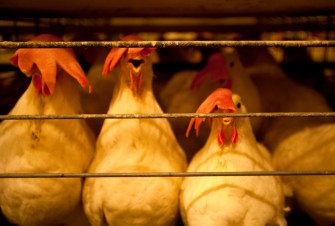 Chickens line up to feed a the University of Illinois at Urbana-Champaign poultry farm. The farm houses approximately 7,000 chickens used for egg production and ovary cancer research.

Media and public organizations have continually challenged this strategy and question the constitutionality of these laws. The latest development in the clash involves legislation governing the use of drones for news gathering.

“Very little could be more important to the public good than understanding where our food is coming from and how it’s being processed. Efforts to limit scrutiny places agriculture industry interests ahead of the public interest,” said Ken Paulson, president and chief executive officer of the First Amendment Center.

“Being able to report on perceived injustices or threats to public safety are at the heart of the First Amendment.”

Farm protection or “ag-gag” laws are crafted to limit access to agriculture facilities, and specifically restrict the use of audio and video recording of working agriculture operations.

The Farm Animal and Field Crop and Research Facilities Protection Act (K.S.A. 47-1825) was passed into law in Kansas in 1990, making it the first farm protection bill in the United States.

Through this legislation the agribusiness industry was able to make it a felony, if found guilty, of gaining unauthorized access to a crop, livestock, or agricultural research facility.

The impetus for this legislation is linked to the increase in the number of hog production mega-farms.

During the 1980s, the pork industry started constructing large hog farms in Kansas, Colorado, Nebraska and Oklahoma. These farms were capable of producing 300,000 hogs per year, as reported by the U.S. Department of Agriculture.

The benefits to the hog industry made these mega-farms an attractive prospect. In a time of waning pork prices, these operations offered to lower input costs while increasing product output.

However, issues related to waste water runoff, air quality and land value made mega-hog-farms undesirable to many of the communities in these states. In addition, animal rights groups were very concerned with the treatment of animals in these large facilities.

Construction of those facilities was often met with protests and vandalism and destruction of property was not uncommon. Some operations even had hogs taken from the site by protesters and people who entered the facility after hours.

In response to the theft of product and damage to property, the hog industry began to lobby state legislatures to pass laws that would limit access to the mega-farms.

The industry cited the financial loss incurred by loss of product or vandalism, as well as the potential risk to the animals (and humans) when unauthorized access occurs.

Organizations and members of the media challenged the industry’s claims. These groups believed the proposed laws were designed to protect the pork industry and its veil on unethical production practices.

The New York Times wrote about the protests against corporate hog farms in a 1997 article titled “Rural Opposition to Hog Farms Grows.”

Despite these protests, the Kansas legislature moved forward with passing the legislation.

The next year, North Dakota and Montana state legislatures followed suit and adopted versions of farm protection laws. It would be 20 years before the next farm protection bill would pass into law.

“There is indeed a legitimate interest in stopping fraud, trespassing and interference with operations of any business, but we already have laws to handle these situations,” said Gregg Leslie, legal defense director for the Reporters Committee for Freedom of the Press.

“The purpose of the new proposals seems to be to make these activities a felony if the point is to expose questionable practices to the public, and this type of criminalization of information should not be tolerated.”

The Iowa legislature passed H.F. 589 in early 2012 and launched a new era of farm protection legislation.

The Iowa and Utah laws make violations a misdemeanor crime, not a felony like previous laws.

“When journalists are allowed to report on the problems of the industry, the industry gets better.” - Sandra Baron, Media Law Resource Center

Also unlike the versions from the 1990s, the new set of bills hinged on the buzz word “biosecurity” and specifically addressed the issues of undercover access to information and facilities and investigative reporting.

“Biosecurity” is a post 9/11 buzzword used to address many issues in the food production system.

Originally designed to protect the food supply from the threat of a foreign terrorist attack, the term now encompasses domestic issues as well.

Agribusiness states security measures are needed at animal and food production operations for many reasons.

Many threats to food safety, such as Salmonella strains, can be carried into a facility on clothing, hair and shoes.

Another reason to restrict access to facilities is to prevent human injury. Producers state that agriculture operations are dangerous places for people who are not properly trained to be there.

“The U.S. constitution says that you cannot enter a person's private property without formal knowledge,” said Joe Seng, a veterinarian and Iowa state Senator who co-sponsored that state’s legislation, during a 2012 Marketplace interview.

“Even a policeman has to obtain a search warrant to get on a piece of property. These are private properties owned by either farmers or corporations that have strict bio-security facilities that do not want either birds, mice, vermin, anything like that, even cockroaches entering into these facilities -- people included.”

Sandra Baron, executive director of the Media Law Resource Center, said the statutes still have to meet “constitutional norms” for freedom of speech.

But then there are the laws that criminalize entrance to farms, ranches or other similar operations with what the law defines as “the wrong motives,” she said.

It’s an issue that affects everyone, she said, because “when journalists are allowed to report on the problems of the industry, the industry gets better.”

The laws also criminalize gaining access to a facility under false pretenses, such as applying for a job with the intent to write an undercover news article.

The practice of taking jobs at operations to gain information has been used by both professional journalists and activists groups.

The industry states that this approach is unethical, and that editing of audio and video files can make any situation look worse than it might really be.

Activists and journalists see these laws as a direct infringement on First Amendment rights, as well as the agriculture industry’s attempt to limit public knowledge of unscrupulous business practices.

Animal rights activists are particularly concerned as to what the lack of transparency means for meat and poultry production operations.

Mark Bittman of the New York Times, who first used the term “ag-gag” in a 2011 article, wrote: “Videotaping at factory farms wouldn’t be necessary if the industry were properly regulated. But it isn’t. And the public knows this…”

Louisiana was the first state to adopt an Agriculture and Aquaculture Disparagement law.

It did so in 1991 when the state legislators were pressured by cantaloupe growers to push back media attention related an E. coli outbreak that had been traced to the fruit.

The law established that media, or individuals, who disseminate information that creates a financial loss for an agriculture or aquaculture product or business can be held responsible and required to pay restitution equal to, and sometimes greater than the loss.

Each version has nuances based on the leading agriculture and aquaculture industries in that state.

North Dakota is the only state currently to have both agriculture disparagement and farm protection laws in place.

“Very little could be more important to the public good than understanding where our food is coming from and how it’s being processed. Efforts to limit scrutiny places agriculture industry interests ahead of the public interest,” said Ken Paulson, president and chief executive officer of the First Amendment Center.

North Dakota is also a state in which the truthfulness of that statement does not protect a defendant.

Under the North Dakota law, a defendant can still be held financially culpable if a statement is made (even a true one) with the intent to negatively impact the market for the agriculture product.

From the passage of the first piece of legislation, media professionals and First Amendment scholars have questioned the constitutionality of such laws.

Most often cited is the “chilling effect” these types of laws will have on a free and open discussion of agriculture practices.

Until recently, the most prominent case involving an agriculture disparagement claim was that of the 1996 Texas Beef Group v. Oprah Winfrey.

The group of Texas cattlemen stated they had suffered losses into the millions of dollars as a result of an Oprah episode in which she spoke with food safety experts about the growing concern of BSE (bovine spongiform encephalopathy), commonly known as “mad cow disease.”

The group sought to recoup damages from Winfrey.

The case was dismissed after months of back-and-forth between the Cattlemen’s group and Winfrey’s legal team.

However, the case was not rejected due to a review of the law’s constitutionality, but rather because the judge determined the Cattlemen’s product was not perishable, which was requirement under the Texas guidelines.

The media coverage highlighted the BPI practice of using lower levels of ammonium hydroxide gas to prevent the growth of E. coli in ground beef.

Public outcry followed the media attention, specifically the contract between U.S.D.A. and BPI to use ground beef containing LFTB in the school lunch programs.

Several large supermarket chains cancelled contracts with BPI as a result of the public uproar.

In the following months BPI closed three of its four plants and more than 750 BPI employees lost jobs due to these closures.

BPI claims that ABC News disseminated false and misleading information about its product, which resulted in substantial financial loss.

This qualifies as grounds for a lawsuit under the South Dakota law.

ABC News holds the position that its reporting was fair and that there are no grounds for a defamation suit.

The case is pending. BPI is trying to get it moved back to state court and out of federal jurisdiction.