Grape farmers in Wisconsin are facing a growing threat, and in many cases it is coming from their own neighbors.

Herbicides that are used to kill weeds in crops such as corn and soybeans can be deadly to other plants, including grapes. Food or wine grape vines exposed to the chemicals may shrivel up, turn colors and grow strange, elongated new leaves.

“It just becomes a bizarre, distorted structure,” said Judy Reith-Rozelle, a consultant and horticulture researcher at the University of Wisconsin-Madison. “The grape farmers are real worried.” 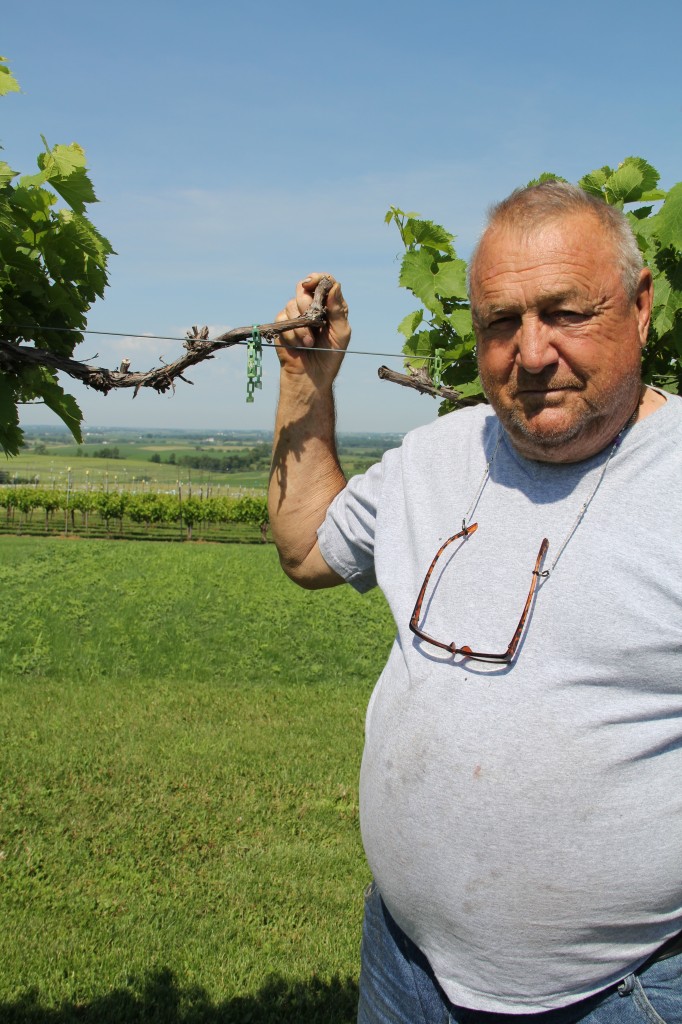 Ted Kearns, a Vietnam veteran and grape grower near Platteville, won a civil case in 2007 against a nearby grain producer after his crop was severely damaged by herbicidal drift.

Wisconsin’s grape industry is growing fast. A U.S. Department of Agriculture survey released this spring shows that the number of farms has doubled since 2005, and the state adds an average of nine new vineyards each year.

There are now more than 100 commercial vineyards in the state. Wisconsin grapes are mainly used for wine, though some growers produce table grapes and grapes for juice.

The UW-Extension estimates the industry generates about $200 million a year in sales and labor.

But grapes are highly sensitive to a commonly used class of herbicides known as plant growth regulators, which kill broadleaf plants. Vineyards located near corn and soybean producers are at risk if the herbicides drift onto their crops.

“It’s a problem that, if not dealt with, could cause a significant economic impact to the vineyards and wineries around the state,” Prellwitz said.

The state Department of Agriculture, Trade and Consumer Protection is trying to address the problem.

The agency is encouraging specialty crop farmers -- including beekeepers, fruit and berry farmers, hop growers and organic farmers -- to register on DriftWatch, an online database created by Purdue University. The goal is to increase awareness and reduce the misuse of herbicides by neighboring farms.

At issue is a class of commonly used growth-regulating herbicides including dicamba and 2,4-D.

“Any time you’ve got this confluence of two major forces, there’s likely to be some conflict,” said Donna Gilson, DATCP spokeswoman. “I think it’s the rise of the grape growing industry, and it’s happening in a lot of the corn and soybean growing country in Wisconsin.”

Even tiny amounts one hundred times lower than the recommended application of these herbicides can cause injury to grapes. 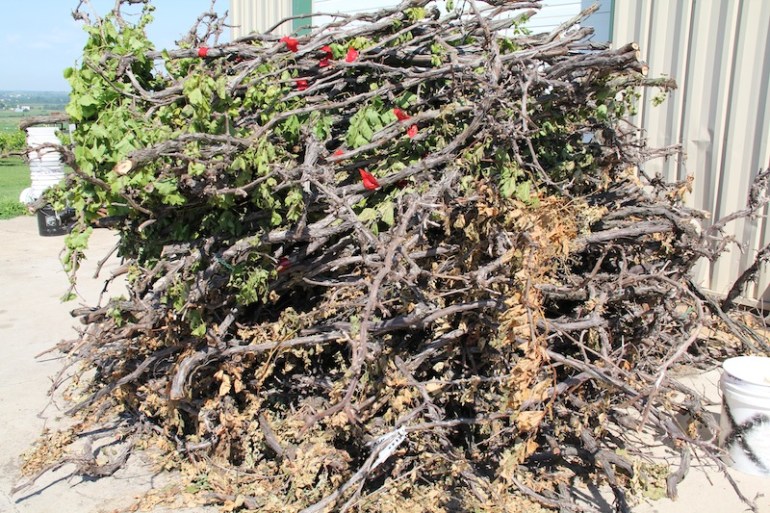 Platteville grape grower Ted Kearns said he piled up more than 300 ten-year-old vines in his driveway after they died from herbicidal drift last year.

However, Bob Oleson, executive director of the Wisconsin Corn Grower’s Association, said he has not heard any complaints of drift impacting vineyards or other specialty crops and said it is not an issue for corn growers.

“They just don’t plant them (vineyards) next to corn fields so there isn’t the possibility of drift. Furthermore, with the modern technology we’re just not seeing instances of drift we saw many, many years ago.”

Scientists in the industry do not dispute the well-documented side effects of herbicidal sprays.

“The symptoms are very clear. It’s difficult to mistake this for other things,” said John Jachetta, a crop scientist who until his retirement in July worked in regulatory sciences and government affairs at Dow AgroSciences, a leading herbicide producer.

Lee Van Wychen, director of science policy at the Weed Science Society of America, an industry group, agreed that the symptoms grapes exhibit when they are exposed to these herbicides is hard to mistake.

He said while other pesticides and herbicides can sometimes impact sensitive crops like grapes, “If there’s a case that occurs with 2,4-D or dicamba ... it would be much easier to come to the conclusion that there was spray drift damage.”

The problem of chemical drift onto grape farms has even led to litigation.

In 2007, Ted Kearns, a vineyard farmer near Platteville, won a civil case against a nearby grain producer. The case was settled in Lafayette County Circuit Court for about $150,000 according to Kearns’ lawyer, Ted Warpinski.

A few years earlier, a farm pasture at nearby Spensley Grain was sprayed with RangeStar, a combination of 2,4-D and dicamba, that drifted on the wind and volatilized in the air, eventually landing on Kearns’ grapes and causing them to die. 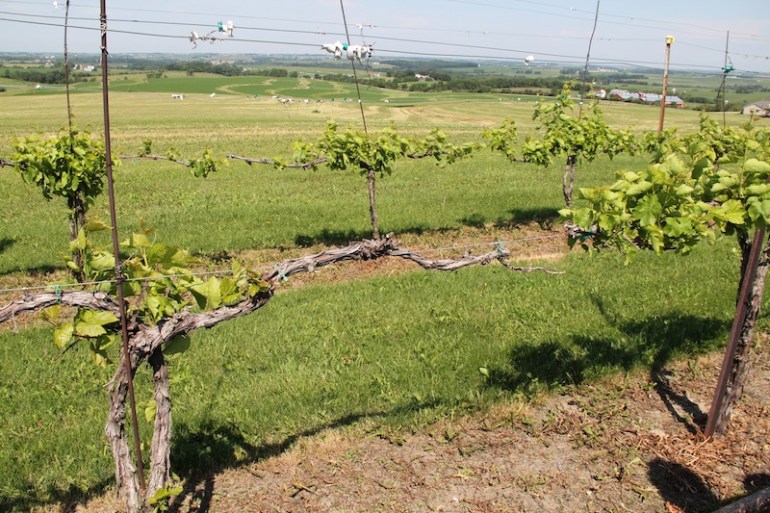 Platteville grape grower Ted Kearns said many of his vines have been repeatedly exposed to herbicidal drift, stunting their growth

“I cried. I actually cried,” said Kearns, a Vietnam veteran who said starting a vineyard was his dream. “I spent 12 hours a day, seven days a week for 12 years on this vineyard and winery, trying to make it work.”

Kearns, a political conservative with an “I Stand With Walker” sign on his door, said he has had drift damage six out of the past nine years and is contemplating additional litigation. Now, he hopes to sell the property he bought 14 years ago but fears it has lost a lot of its value.

Farmers who use commercial herbicides are required by law to follow the label on those products. But that may not be as simple as it sounds.

The 13-page label for Roundup Ready, a popular herbicide for agricultural use made by Monsanto, requires farmers to apply the chemical several times for it be effective, avoid trees, vines, citrus fruit, nuts, olives and vineyards and avoid spraying during times of humidity and heat, along with an array of other specifications.

Reith-Rozelle said sometimes farmers do not follow the label because it is too complicated.

DATCP often can do little to enforce the law when it comes to herbicidal drift because the origin of the drift is hard to track, especially if it volatilizes rather than being carried by the wind, Gilson said.

Ultimately, that puts the responsibility of detecting potentially damaging herbicide use into the hands of those who may be affected.

“If you see damage, or you see practices that you think are likely to lead to damage or threaten it, report it to us,” Gilson said. “We will check it out.”

But Kearns said the reason he has had so many incidents of damage is that “People will not comply with the law, and the state will not force them to.”

Gilson said DATCP has investigated 58 complaints involving alleged drift between 2007 and 2011, the most recent year for which data are available. In nearly every case, applicators were issued at least a warning. In 33 cases, a civil complaint was filed, and there was one criminal complaint.

Prellwitz said his group plans to seek further restrictions on herbicide use, possibly through new legislation. Its goal is to “restrict some of the uses of different chemicals around vineyards and around specialty crops around the state,” he said.

“I probably won’t see it to the end because I’m 74 and my health is gone,” Kearns said. “I gave it all away on this place.”

The nonprofit Wisconsin Center for Investigative Journalism (www.WisconsinWatch.org) collaborates with Wisconsin Public Radio, Wisconsin Public Television, other news media and the UW-Madison School of Journalism and Mass Communication. All works created, published, posted or disseminated by the Center do not necessarily reflect the views or opinions of UW-Madison or any of its affiliates.