The Food Safety and Inspection Service announced changes to the process it uses to detect Salmonella in ground beef.  The changes apply to the methods used to determine which facilities will be tested, as well as the size of samples collected.

Despite changes, ground beef that tests positive for Salmonella can still enter the food supply and will not be subject to automatic recall.

The proposed changes aim to bring Salmonella testing standards in line with those established for E. coli. Testing will no longer be based on a tier system.

See also "Salmonella proves to be a problem in beef too"

All ground beef that is tested for E. coli, will also be tested for Salmonella. Food safety officials expect this will increase the number of facilities involved in Salmonella testing and help prevent Salmonella outbreaks linked to ground beef.

The changes also expand which beef products are subject to testing for Salmonella.

STEC is a group of pathogens commonly referred to as E. coli and is frequently linked to foodborne illnesses in humans. E. coli O157:H7 is the serotype of the STEC strains often associated with food recalls. 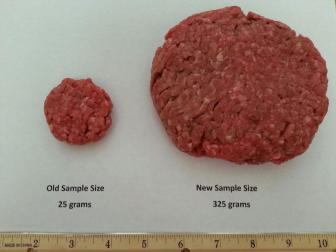 Changes to the Salmonella testing process includes provisions to increase the tested beef sample from 25 grams to 325 grams.

However, food safety officials did not announce changes to the current reporting system that allows ground beef that tests positive for Salmonella to enter into the food supply. Unlike E. coli, which USDA has declared an adulterant to ground beef, Salmonella-positive ground beef is only recalled if it is linked to a human illness.

Salmonella is the most common cause of foodborne illness in the meat and poultry industry.

The Food Safety and Inspection Service has been using three category, risk-based system to determine which ground beef manufacturers would have to test for Salmonella and how often the testing would take place. That system was implemented in 2006 for larger producers.

Facilities that did not meet standards were tested more often than those with a clean slate.

FSIS has determined these Category-3 facilities pose the greatest risk due to the lack of proper pathogen controls. Therefore, Salmonella and E. coli testing was done more frequently in these facilities.

Salmonella testing was done independently and not with E. coli testing. In 2008, food safety officials expanded the inspection process to include facilities producing less than 1,000 pounds of ground beef per day.

The public comment period opened in late August and will continue through the end of September.