Crop insurance payouts to Midwestern corn and soybean farmers will be substantially less in 2013 than in recent years, agriculture economic experts predict.

As a result, Midwestern grain farmers might find their incomes dropping below 2012 income numbers, which were largely inflated because of heavy insurance payouts – or indemnities – that were triggered when crops failed because of a widespread drought.

“Income wise, last year’s income on grain farms in Illinois was a record year,” said Gary Schnitkey, a professor on farm management and an agriculture economics researcher with the University of Illinois. “This year, we’re going to be below income since probably 2006.”

Though experts predict that the amount of payouts insurers give farmers will decrease from the high 2012 levels, the acres of corn and soybean that farmers pay to insure has remained relatively consistent.

A review of crop insurance data found that farmers in Illinois, Indiana and Iowa insured less than 2 percent more acres of corn and soybean crops in 2013 than in 2012. 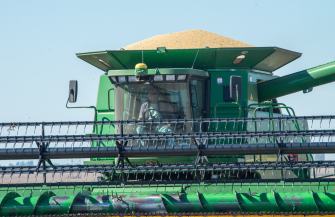 A combine with a full hopper of soybeans heads to a waiting truck at a harvest just north of Mansfield, Ill., on Wednesday, Oct. 9, 2013.

Insuring those millions of acres means that farmers pay billions of dollars in premiums and deductibles.

Doug Yoder, a senior director of affiliate and risk management with the Illinois Farm Bureau, said it’s important to remember that farmers don’t get insurance for free.

Corn and soybean farmers in those three Midwestern states paid roughly $2 billion in insurance premiums in 2012, though the federal government subsidized more than half of that amount.

In 2013, they still paid more than $2 billion in insurance premiums, with the government again subsidizing more than half of that amount.

As a rule, insurance payouts go down when yields go up

Different factors cause crop insurance payouts to vary from year to year, Schnitkey said, but two of the most prominent factors are crop yields and crop prices.

“Overall, I would expect there to be few to a moderate amount of crop insurance payments this year, and what’s primarily going to trigger [the moderate amount of payments] is lower prices,” said Schnitkey. “We’ve had a pretty substantial drop in prices, and that almost triggers payments, but then it would depend on what yields look like on individual farms.”

According to an October report, estimated crop yields in Illinois are close to guarantee yields, or the level at which insurance policies start to pay out. Officials estimated that Iowa yields will be less bountiful than those in Illinois, but still more than recent years.

Other estimations project crop yields to be even greater.

“I’m hearing yield reports that already corn and soybean yields are doing much better than expected, even for this year,” said John Hawkins, a Midwest farmer and spokesman for the Illinois Farm Bureau. “Throughout Illinois, I’m hearing a lot of yield reports either side of 200 bushels per acres, which is substantially higher than last year.”

Farmers got about 100 bushels of corn for each acre they planted last year, he said.

“It varies from area to area, but overall we’re probably going to see yields in Illinois probably double than what they were last year,” Hawkins said.

Midwest crop yields are faring better than last year’s because of good crop-growing weather, according to Hawkins. He said farmers had just enough rain – aside from an August dry spell – and temperatures were moderate in June and July.

“And that basically lead to good growing conditions,” he said.

But because Midwestern yields will be close to the guaranteed yields or even exceed guaranteed yields, crop insurance providers won’t be required to compensate farmers for bushels of corn or soybeans spoiled by undesirable weather.

“The further you get below the guaranteed yield, the larger the insurance payments because you’re making up for bushels that are not produced on the farm,” said Schnitkey.

When crop yields are up, prices go down. When there is more of something, its availability makes it readily accessible, less scarce and, in turn, less expensive.

This year, recent market activity shows that actual harvest prices will be much less than projected harvest prices, which the USDA's Risk Management Agency establishes before harvest time in order to determine crop insurance guarantees.

In 2013, the Risk Management Agency set the projected price of corn at $5.65 per bushel, considerably lower than the nearly $7 or $8 a bushel rates of previous years.

The actual harvest price of corn so far this year, according to early October exchange data, is only $4.40 – more than $1 per bushel less than the projected price.

In down years for harvesting, this gap in price levels would mean increased insurance payouts to farmers. But with large expected yields, that isn’t the case.

“When you have a year like this where the price goes down, the yields go up – it may be too early to tell and it’s going to vary from county to county and area to area – but it appears to most analysts that we won’t see very widespread crop insurance claims throughout the Midwest at all,” said Yoder. “Yields have gone up enough to offset the drop in price.”

For soybeans, the Risk Management Agency set the projected price at $12.87 per bushel. Exchange data found that the actual harvest price of soybeans so far in 2013 is $12.70 per bushel. 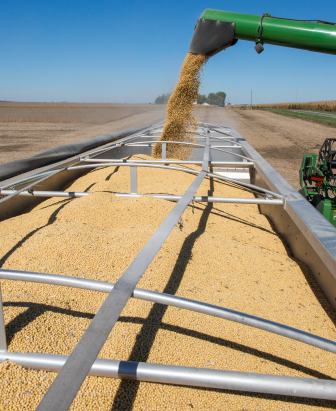 Soybeans are offloaded from the combine to a waiting truck as harvest continues just north of Mansfield, Ill., on Wednesday, Oct. 9, 2013.

Even though crop insurance payments and farmers’ incomes are projected to decrease from last year, Schnitkey said the downturn is simply a result of uncharacteristically high prices coming down and unusually large insurance payments shrinking.

Still, some farmers maintain hope that bulkier yields will outweigh any price drop.

“Yes, the prices are going to be lower, but hopefully you’ll make up for some of the shortfall with volume,” said Hawkins. “You always make more in a good year than you do in a drought year, even though the prices are lower. It’s kind of counterintuitive, but that’s the way it works.”