GREEN BAY -- A four-day hearing on challenges to the expansion of a Kewaunee County mega-dairy illustrated deep divisions, ranging from neighbors who shared fears of polluted wells and illness, to fertilizer and feed dealers who showed up to express their support of big farms.

At issue is Wisconsin's Department of Natural Resources approval of a plan by Kinnard Farms Inc. in the town of Lincoln in northeastern Wisconsin to expand its operation by 55 percent to about 6,200 cattle. Such large dairies are called concentrated animal feeding operations, or CAFOs, and need industrial-like pollution discharge permits from the state to operate.

The expanded farm would become the fifth-largest dairy in Wisconsin and would produce more than 70 million gallons of manure a year, which would be spread on surrounding fields.

The permit is being challenged by five residents who live near the Kinnard farm. They are being represented by lawyers from the Madison-based environmental law firm, Midwest Environmental Advocates. The petitioners charge the Department of Natural Resources permitted the expansion without assurances that the farm’s discharges would meet water standards and without allowing sufficient public comment.

The residents also allege that the permit was issued by the agency before the Kinnards had submitted completed plans for the project and that the agency was remiss in not requiring water monitoring as part of the permit.

During the hearing, which concluded Friday, Department of Natural Resources lawyers and officials defended the agency’s actions. They argued, for example, that it is not unusual for such permits to be issued prior to having completed plans because there are provisions for altering the permit after receipt of plans.

Agency engineers said the farm’s expansion plans feature some of the most protective environmental safeguards in the state.

While the bulk of the hearing, which was held in Green Bay’s city hall before Administrative Judge Jeffrey Boldt, was taken up by a somewhat tedious discussion of technical details of the expansion, an emotional late-night public comment session Wednesday filled the chairs in the hearing room.

Though the large majority of those who provided testimony were against the expansion and the Department of Natural Resources' approval of the permits, the farm did have its supporters. Of the more than 25 people who spoke, four supported the Kinnard farm.

“I know of nobody better than the Kinnards,” Cochart said.

Cochart said he is especially impressed with the modern technologies the farm uses to protect the environment and to produce more milk with fewer cows. He said agriculture has to continue to make such advances.

“To not proceed is to regress and to starve the world,” Cochart said.

The farm also received the support of Andy Barta, an Algoma feed dealer who does business with the Kinnards. He also praised the Kinnard’s modern farming practices, especially their manure management efforts.

Sarah Williams, the Midwest Environmental Advocates lawyer who represented residents challenging the permit, said after the hearing that it is likely to take as many as five months for the issue to be resolved.

She and others have indicated that the outcome of the challenge could have statewide implications for how the Department of Natural Resources permits CAFOs and on whether the agency will be required to impose more conditions on the operation of the large farms.

A spokesperson for Kinnard Farms declined comment on the hearing.

Most who testified Wednesday during the public comment period came with dark assessments of the Kinnard farming practices, especially the spreading of millions of gallons of manure in an area that is susceptible to pollution because of porous bedrock called karst. 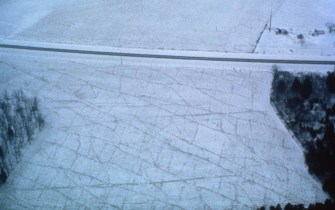 Provided by the Door County Soil and Water Conservation Department

Crevices in this frozen Door County farm field illustrate the groundwater’s vulnerability. Water travels so fast through cracks in the bedrock that it gets to the aquifers before any pollutants in it can be filtered.

This type of bedrock is characterized by fractures through which manure can seep into drinking water supplies.

The state does not consider the presence of karst in its CAFO regulations.

Several who live adjacent to the Kinnard farm told of wells contaminated by E. coli, which comes from human and animal waste. Among them was Dave Mindak, who said his well -- which tested positive for bacteria in 2011 -- is only about 40 feet from a field where the Kinnards spread manure.

Earlier during the hearing, a Department of Natural Resources official testified that such contamination is not necessarily from the industrial-sized farms and could also be coming from “geese, small farms and septic systems.”

Critics questioned why the Department of Natural Resources has refused to require the Kinnards to monitor water quality as part of their permit. And several cited instances in which they said the Department has failed to exert adequate oversight of the giant farms and their manure-spreading practices.

Ken Johnson, who heads the Department of Natural Resources' water division, said the complaints from those who testified at the hearing are similar to many concerns the agency hears about its permitting and oversight of the large and controversial farms.

Johnson said widespread contamination of wells in Kewaunee County has long been a problem because of the fractured bedrock that underlies the region.

“It’s very difficult to ascertain where the pollution is coming from,” Johnson said. “That doesn’t mean you can assert that there is no CAFO pollution.”

As for the agency’s oversight, he said the Department of Natural Resources monitoring of the CAFOs and their pollution permits is little different from its regulation of municipalities and industry. He said the agency also relies heavily in those areas upon self-reporting and citizen complaints.

“I know people would like us to have an inspector out there every time somebody spreads,” Johnson said. “But we don’t have the staff or the inclination to do that. It would be very expensive to do that.”

This report, part of Water Watch Wisconsin, was supported by The Joyce Foundation. The nonprofit Wisconsin Center for Investigative Journalism (www.WisconsinWatch.org) collaborates with Wisconsin Public Radio, Wisconsin Public Television, other news media and the UW-Madison School of Journalism and Mass Communication.
All works created, published, posted or disseminated by the Center do not necessarily reflect the views or opinions of UW-Madison or any of its affiliates.