The 50-page complaint filed in U.S. District Court in Idaho asks the court to declare that the new law violates the U.S. Constitution, and it seeks an immediate repeal.

The bill specifically addresses – and makes illegal – gaining employment access through “misrepresentation.” Many undercover reporters and animal-rights activists have gone to the length of becoming an employee at an operation in order to video tape alleged abuse.

The plaintiffs claim the Idaho statute violates the First Amendment, the Supremacy Clause and the Fourteenth Amendment of the U.S. Constitution.

Otter and Idaho Attorney General Lawrence Wasden are named as defendants. They declined to comment due to the pending litigation.

“It is so corrupt,” said Anita Carswell, Guardian campaign manager for In Defense of Animals. “They are trying to get these through very quickly because as soon as the media pick up on it, the general public can see they are being hoodwinked by this. Everyone has an attachment to free speech; these laws are designed to limit free speech.”

The Animal Legal Defense Fund, People for the Ethical Treatment of Animals, the American Civil Liberty Union of Idaho and the Center for Food Safety are among the plaintiffs. The organizations are joined by several freelance journalists.

The American Civil Liberty Union could not be reached for comment, nor could the Humane Society of the United States’ Idaho office.

View the 50-page Idaho complaint below

The Humane Society is not part of the law suit, but was vocal in its opposition to the statute.

One of the plaintiff attorneys is Justin Marceau, a law professor at the University of Denver. Marceau is also counsel for a group who last July filed a similar lawsuit against Utah’s farm protection law.

The sticking point seems to be the battle between what opponents of the statute see as free press and free speech issues, and what supporters feel are property rights and farm owners’ rights to control undercover recordings on their property.

The Idaho law came on the heels of public outrage surrounding animal abuse at one of the state’s dairy farms.

The nonprofit group Mercy for Animals released a video that documented extreme abuse of dairy cows at Bettencourt Dairies. After the Idaho law was introduced, the organization released additional footage that showed a cow being sexually assaulted.

Idaho has a $2.4 billion dairy industry, according the State’s Agriculture Department.

“The law creates the crime of ‘interference with agricultural production,’ which has both the purpose and effect of impairing the public debate about animal welfare, food safety, environmental, and labor issues that arise on public and private land,” stated the lawsuit. 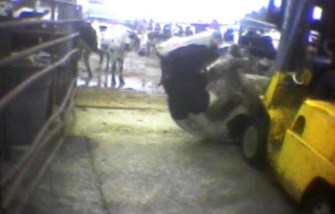 Photo provided by the Humane Society of the United States

In 2008, an undercover Humane Society investigation into a California slaughterhouse produced video of workers abusing sick cattle. The video eventually triggered a major recall and multimillion dollar lawsuit. In Idaho, efforts similar to this would be illegal.

The Idaho lawsuit goes on to also state that the law is written so broadly that it is hard to determine where its jurisdiction might end.

Furthermore, the lawsuit argues on behalf of undercover investigations conducted by activist groups and the media. The lawsuit cites that more than 80 investigations over the past 10 years have exposed “horrific animal suffering.”

Carswell said she sees the legislation as the agriculture industry “trying to squelch undercover reporting because these reports keep uncovering chronic, continual abuse.”

The plaintiffs state that the punishment for violating the new law – up to a year in prison and a $5,000 fine – is worse than the punishment for actual animal abuse, which carries a maximum jail term of just six months for first-time offenders.

“Senate Bill 1337 is about agriculture producers being secure in their property and their livelihood,” said Otter in statement he made the day he signed the legislation. “No animal rights organization cares more or has more at stake than Idaho farmers and ranchers do in ensuring that their animals are health, well treated and productive.”

That sentiment was further echoed by Bob Naerebout, executive director of the Idaho Dairymen’s Association, an organization that strongly supported the legislation.

A press release from the group stated that opponents to the legislation want to “mislead people into believing that the bill will enable Idaho farmers to hide animal cruelty.”

“Senate Bill 1337 is about agriculture producers being secure in their property and their livelihood,” said C.L. Otter

The release highlighted the fact that the Idaho State Department of Agriculture monitors a hotline that can be called anonymously to report abuse. It also stated that the law does not block “lawful” reporting or investigations.

One prominent member of the Idaho dairy industry that spoke out against the statute was Hamdi Ulukaya, founder and chief executive officer of Chobani yogurt.

In a statement urging Governor Otter to not sign the bill, Ulukaya wrote: “[the bill] would limit transparency and make some instances of exposing the mistreatment of animals in the state punishable by imprisonment. This could cause the general public concern and conflicts with our views and values.”

“It is so corrupt,” said Anita Carswell

Ulukaya also wrote that, “As someone who grew up on a farm, I believe deeply that the humane treatment of animals is an ethical and moral imperative and, having spent a lot of time in upstate New York and Idaho, I know hundreds of farmers feel the same.”

The Dairymen’s press release cited an Idaho Agriculture Affairs Committee member as saying: “By releasing the footage to the Internet, with petitions calling for a boycott of products of any company that bought meat or milk from Bettencourt Dairy, the organizations involved then crossed the ethical line for me. The goal of changing behavior then became ruining a business.”