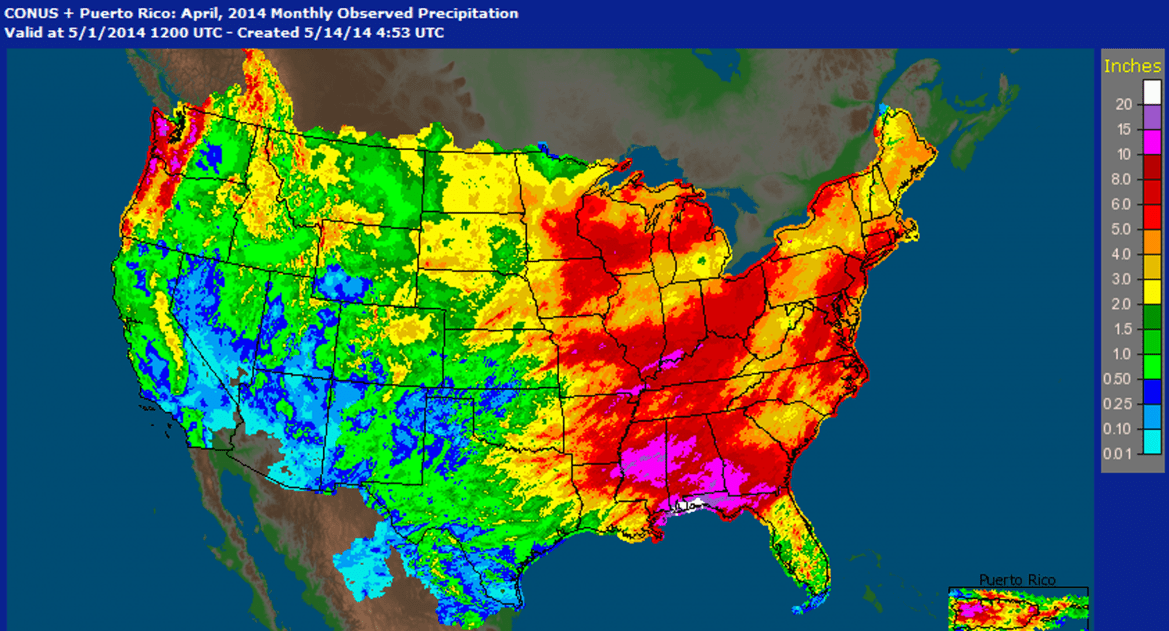 Wet and soggy conditions in some parts of the United States are delaying spring planting for farmers.

In fact, the conditions have grown so unfavorable in some areas that farmers are taking to social media to publicize their problems. On Twitter, the tag “#plant14” has frequently been populated by images of tractors stuck in the mud and of fields submerged under pools of water.

Much of the difficulty has to do with a harsh winter that brought ample amounts of snow to some areas. It also has to do with a wet month of April that left at least 5 inches of rainfall in many states.

Parts of southern Illinois, Indiana and Missouri reported 15 inches of rainfall in April, according to data from the National Weather Service.

Other parts of southern Illinois, eastern Iowa, central Missouri and southern Indiana all received up to 10 inches of rainfall.

The rainy conditions from this planting season led @old19er to Tweet on May 19: “#plant14 stalled...inch of rain since 5am #wetwet.”

Another Twitter user, @stevekoeman, Tweeted: “Back in the field planting again. Rain tonight. Atleast get one day before it gets wet again. No-till #plant14.”

The temperature average for most of the Midwest on May 15 usually falls between 40 and 50 degrees Fahrenheit, according to data from the National Climate Data Center. This year, many Midwestern cities recorded temperatures in the 60s.

The low for May 15 in the Midwest this year was about 40 degrees.

The Western Plains region’s temperature average for the same day is typically between 30 and 50 degrees. This year, temperatures were slightly warmer, though generally fell into that range. Much of that region recorded temperature highs in the upper 50s and even 60s.

However, the low for May 15 in the Western Plains region dropped as low as 24 degrees.

In some areas, the unusually low temperatures also brought snow and created additional obstacles for farmers trying to carry out spring planting.