The agriculture industry will soon face more frequent extreme weather and more tenacious pests, according to a White House assessment.

If farmers cannot overcome these challenges, then U.S. crop and farm profits will decline, the assessment warned.

“It’s really gotten to the point where the new normal is extreme weather," said Brad Rippey, a U.S. Department of Agriculture meteorologist. "And that is certainly true for the Midwest and the Great Plains, two of the big production areas for the United States."

One agriculture-related consequence of climate change will be violent storms, the assessment forecast. 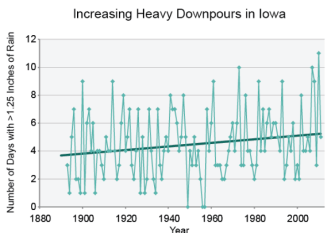 Data from the Iowa Department of Natural Resources

Data show that the number of days with heavy rainfall has increased in Iowa. According to the National Climate Assessment, other regions will see similar increases throughout the remainder of the century.

A review of precipitation data from the Iowa Department of Natural Resources shows that the number of heavy downpours in the top corn producing state has increased since the early 1900s.

At the beginning of the 20th century, Iowa averaged about four days each year with more than 1.25 inches of rainfall

Since then, that average has grown to about six days each year.

“It seems that on a flip of a dime you can go from drought to flood and back again,” said Rippey. 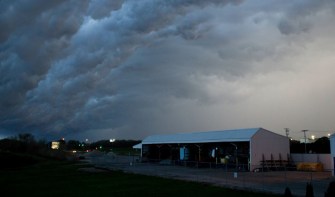 A storm moves across the horizon in Savoy, Ill. "It’s really gotten to the point where the new normal is extreme weather," said Brad Rippey, a U.S. Department of Agriculture meteorologist.

Doug Yoder is the senior director of affiliate and risk management for the Illinois Farm Bureau.

He said he does not necessarily agree with climate studies, but explained that farmers can prevent some heavy rainfall problems by planting cover crops, which protect and enrich soil.

“It would help eliminate some potential runoff or soil erosion,” said Yoder. “If we get heavy rains over the course of the winter before the ground freezes, having that established crop on your acreage can improve those practices.”

Examples of cover crops include crimson clover and cereal rye.

Earlier this month, the White House released the 1,300-page National Climate Assessment as part of the president’s climate action plan. As Robert Holly reports, climate change may soon be affecting our food and farms.

The National Climate Assessment cautioned that farmers will have to overcome hotter nighttime and offseason temperatures, as well. 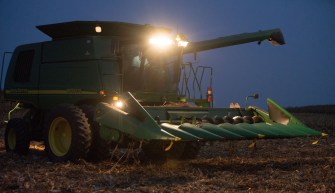 High nighttime temperatures affected corn yields in 2010 and 2012 across the Corn Belt, according to the assessment.

“That has become a concern in the Midwest, these overnight nighttime temperatures and the heat of summer,” Rippey said. “It seems to be taking, in some cases, more of a toll on crops than drought does.”

The number of hot nights will increase by as much as 30 percent in coming years, the assessment concluded.

Similarly, perennial crops, such as cherries and plums, have chilling requirements from 200 to 2,000 hours over the winter. During that period, the crop becomes dormant and stops growing, saving its energy to bud come spring.

If the chilling requirement is not met, yields decline.

Climate projections estimate that fruit and nut trees will not meet their regular chilling requirements by some point within this century. 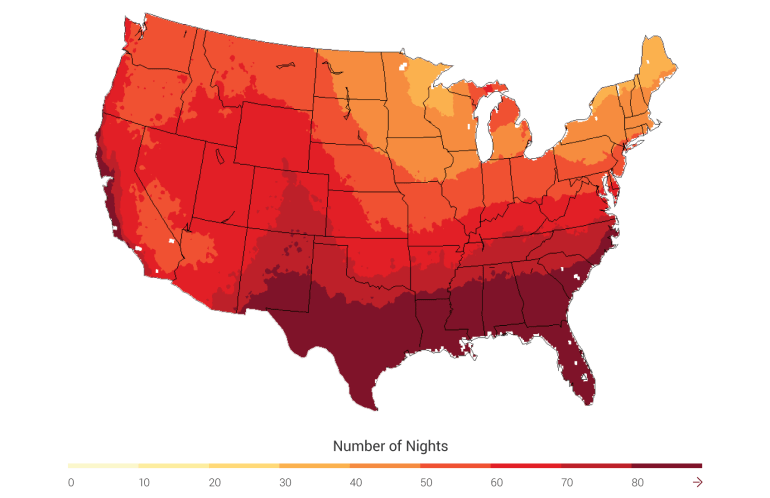 U.S. nighttime temperatures will increase throughout the remainder of the century, according to the National Climate Assessment. Too many warm nights negatively affect crop production because plants need nightly cool-down periods from growing. If nights are warm, plants continue growing and become stressed. The above map shows projected changes in nighttime temperatures for 2070-2099 compared to 1971-2000.

“Weeds, insects and diseases already have large negative impacts on agricultural production, and climate change has the potential to increase these impacts,” stated the assessment, which listed weeds as the greatest cause of global crop loss.

Purchasing and applying that pesticide cost them about $7.9 billion.

Pesticides and the cost to apply them will increase as temperatures and carbon dioxide levels rise. In turn, higher chemical concentrations and frequent spraying may cause environmental problems.

Privet and kudzu illustrate how climate change also causes weeds to migrate into once cool regions. The two types of weeds are widespread in the southern United States and are making their way north.

The USDA has been investigating the effects of climate change on weed growth since 2010. The study is part of the project “Response and Adaptation of Crops and Weeds to Elevated CO2 and Global Warming.”

The USDA plans on finishing the study before the end of next year.

The assessment ranked insects as the second-leading cause of global crop failure and another major problem when it comes to climate change. 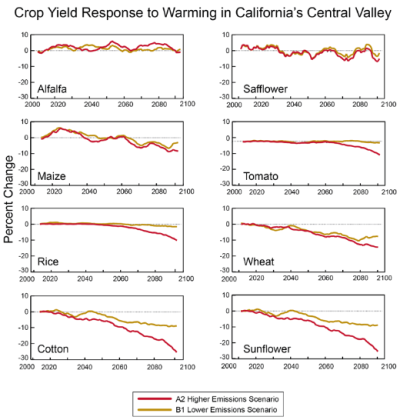 Graphic from the 2014 National Climate Assessment

The above graphic shows projected yields for eight crops grown in the Central Valley of California. Projections are for two emissions scenarios, one in which gas emissions are reduced and one in which emissions continue to grow.

Insects are dormant during cold periods and active during warm periods. They reproduce when temperatures reach seasonal highs. Hotter summers will mean increased reproduction time. In some cases, the warmer summer temperatures will also lead to different generations of insects in a single year.

An example of this already exists with the European corn borer. The insect produces one generation in the northern Corn Belt, but more than two generations in the southern Corn Belt.

Warmer winters will also mean a smaller window of cold to kill off those insects, too.

The assessment suggested that a growing global population will magnify many of the problems stemming from pests and extreme weather.

Projections from the United Nations Population Division estimate that the world’s population will grow to more than nine billion people by 2050.