Two new studies of private well water in Kewaunee County, Wis., have linked contamination to fertilizer, livestock manure and human waste — laying bare a situation that county conservationist Andy Wallander, after 25 years on the job, can sum up in a sentence.

“In these shallow bedrock areas, what you put on the surface, you will end up drinking eventually,” Wallander said.

One study found the potentially toxic bacterium salmonella in drinking water, which could come from people, livestock or wild animals.

“I’ve never seen groundwater like this before. It’s a really high hit rate for contaminants,” said Mark Borchardt, a microbiologist with the U.S. Department of Agriculture’s Agricultural Research Service who coauthored the study.

In northeastern Wisconsin — parts of Kewaunee, Brown, Calumet, Manitowoc and Door counties — dirty water can travel fast down to aquifers without getting filtered along the way, because the soils are so thin and the karst bedrock so cracked.

And most people in rural Kewaunee County rely on private wells. As of May, 30 percent of the county’s wells had been found unsafe due to bacteria or nitrates.

Since 2006, 66 Wisconsin wells have been or will be replaced due to livestock manure contamination, according to state Department of Natural Resources data from its Well Compensation grant fund. Three-quarters of them were in areas with susceptible karst geology.

None of the well replacements was in Kewaunee County, but in the town of Lincoln, where soils are particularly thin, half the wells have tested as unsafe. Lincoln has about 334 households, which rely on private wells. Potential sources of contamination include fertilizers, manure or other waste spread on fields for agriculture, and human waste from septic systems.

The county board in June asked the state for help compiling what is known about health impacts on groundwater from land spreading and septic systems. Next month the board is scheduled to consider an ordinance that would limit waste spreading on thin soils in the winter to prevent contamination.

Even good farming can pollute

Two researchers who tracked 10 town of Lincoln wells each month for a year estimated that in the area near the wells, agriculture contributed 96 percent of the nitrates to groundwater, and septic systems contributed 4 percent. The county’s 42,000 cows produce as much waste as 1 million people; Kewaunee County has a population of about 20,500.

The researchers concluded that agriculture is tainting private wells even when farmers are following generally accepted farming practices.

“I think a lot of us have been saying that for years. Nutrient management plans don’t necessarily mean that your groundwater is going to meet drinking water standards,” said Kevin Masarik, who co-authored the study. “They weren’t designed to be protective of drinking water quality.” 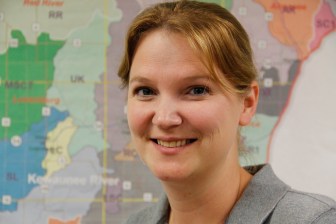 Masarik, an outreach specialist with the University of Wisconsin-Extension, collaborated with Davina Bonness, a Kewaunee County water quality specialist. The research was funded by the town of Lincoln and the Lakeshore Natural Resource Partnership, an environmental advocacy group for the region.

If people there want nitrate levels to go down in the long term, the farming practices set out in nutrient management plans — such as when and how much manure or other waste is added to fields — will have to change, the researchers wrote.

But Dairy Business Association lobbyist John Holevogt said, “I don’t think that these studies show that nutrient management plans are inadequate, in large part because they don’t clearly show what the source of the nitrogen is.”

He also questioned whether the samples were taken correctly and the wells were “up to spec.”

The DNR and the Department of Agriculture, Trade and Consumer Protection regulate agricultural waste.

DATCP spokeswoman Donna Gilson said agency officials could not comment on the studies because they had not had a chance to fully review them.

“The idea of having absolutely no runoff, whether to surface or groundwater, is a very difficult standard to meet, and that’s not how the technical guidance is set up,” said Keith Foye, who runs DATCP’s Land and Water Bureau.

“Nutrient management plans are not an implicit guarantee that there won’t be a discharge of nutrients to groundwater,” Craig said.

He noted that weather often determines whether nutrients get absorbed by crops or run off into surface or groundwater. Asked whether the current standards for farming are adequate to protect the karst area’s groundwater, Craig said, “We have to implement the rules the Legislature passes. They’re designed to be protective. They could be in some situations; they may not be in others.”

Bonness and Masarik’s study examined the month-to-month variation in water quality in wells with a history of contamination. The findings should allow officials to make better recommendations to homeowners on how often and when to test wells and eventually assess whether water quality is getting better or worse.

The results varied so much, the researchers found, that testing just once a year may give homeowners in that area a “false sense of safety.”

Coliform bacteria were found in six wells. They are harmless but indicate that pathogens like giardia could get into the water. Nitrates in drinking water can cause the potentially fatal blue-baby syndrome, a concern for pregnant women and infants.

Borchardt, the USDA microbiologist, conducted an analysis of a 2007 norovirus outbreak in Door County that sickened 229 restaurant patrons and food workers. The analysis found a new septic system was to blame and concluded that in karst areas, even systems built to code may still pollute the water.

Henry Nehls-Lowe, supervisor of the Hazard Assessment, Response and Outreach Unit in the state health department’s Division of Public Health, said officials are concerned about reports of water-quality problems in the area.

“We’re hearing a lot about Kewaunee County and the karst area, and it seems like some of the reports indicate greater risk, possibly,” Nehls-Lowe said. “And we’re paying special attention to it.” 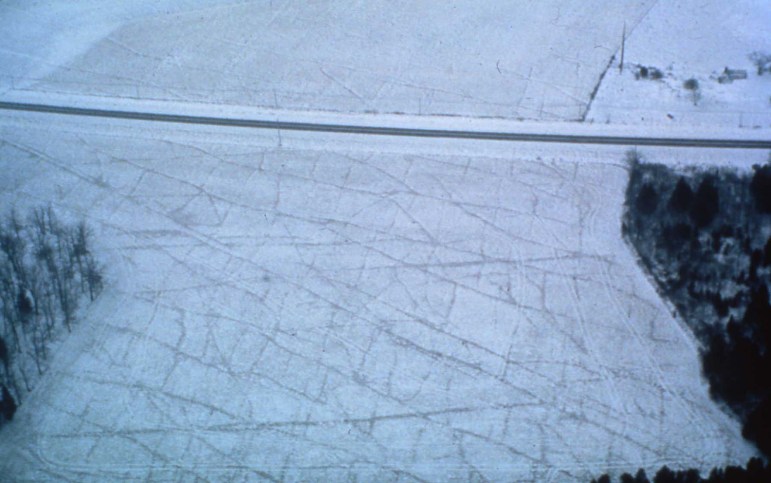 Crevices in this frozen Door County farm field illustrate the groundwater’s vulnerability. Water travels so fast through cracks in the bedrock that it gets to the aquifers before any pollutants in it can be filtered.

In a second study — a pilot project testing 10 wells in Kewaunee County — two were found to be contaminated by cattle manure, two by human waste, and one by both. The researchers tested for viruses specific to those sources.

“When the tests are positive, there is no ambiguity about the fecal source,” the scientists wrote in a summary to the Lincoln Town Board.

The study was conducted by the U.S. Department of Agriculture’s Agricultural Research Service, the U.S. Geological Survey Wisconsin Water Science Center and the UW-Oshkosh.

The wells were not representative but chosen for their water-quality problems. The pilot project is intended to help the researchers apply for funding for a larger study.

They hope to better characterize what is in people’s wells in northeastern Wisconsin and to find out which areas are most susceptible to contamination.

“The other thing we can do is start thinking about practices that minimize contamination,” coauthor Borchardt said. “Not just for livestock …  it’s also for human sources.”

Salmonella, which can cause severe illness, turned up in four of the 10 wells in the pilot project — an uncommon finding in groundwater, Borchardt said. One well also tested positive for Campylobacter jejuni, another bacterium that can make people sick. 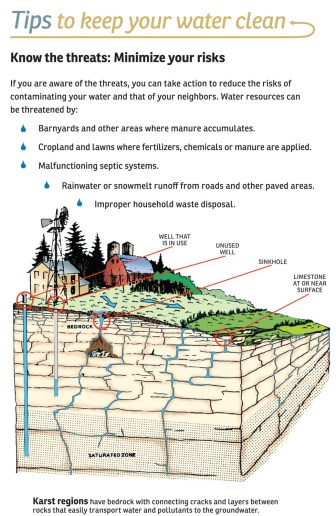 The genetic tests cannot distinguish between live and dead bacteria.

“If they’re dead, it’s not an immediate public health concern,” said Chuck Czuprynski, a professor who directs the UW-Madison Food Research Institute. “But if there’s reason to believe they’re not dead, that’s a different story and it is a concern.”

Salmonella is the most common cause of food poisoning in the United States, according to the U.S. Department of Health and Human Services.

Borchardt said the one-time samples probably represent “kind of a best-case scenario in terms of contamination,” because they were taken after the spring groundwater recharge, which is when snowmelt and rain are more likely to contaminate aquifers.

Holevogt, the dairy lobbyist, focused on the presence of human waste in the wells.

“I think what we find from Dr. Borchardt’s studies is that a lot of the contamination doesn’t come from dairy at all,” he said.

He said he looked forward to more complete research identifying the specific sources of contamination.

Chuck Warzecha, director of the state health department’s Bureau of Environmental and Occupational Health, said he has not seen illness outbreaks in Wisconsin traced back to salmonella in groundwater.

“But I would be concerned every time we found salmonella in a well,” he said.

The state health department plans to provide well tests to any study participants who want to follow up, he said.

The pilot study found both a bovine virus and salmonella in Lynda Cochart’s well water.

“It didn’t surprise me,” said the Casco resident, who says her well test results have deteriorated over the years.

Cochart, along with her neighbors, is trying to halt a nearby dairy operation from expanding. She does not drink her water. Recently, she became worried when her grandchild cut herself and tried to use faucet water to clean it.

“It bothered me the rest of that day and all night, thinking what I’m exposing them to with my water,” she said. “So it is of great concern to me.”

The story is part of Water Watch Wisconsin, a project supported by The Joyce Foundation that is examining water quality and supply issues statewide.
The nonprofit Wisconsin Center for Investigative Journalism (www.WisconsinWatch.org) collaborates with Wisconsin Public Radio, Wisconsin Public Television, other news media and the UW-Madison School of Journalism and Mass Communication. All works created, published, posted or disseminated by the Center do not necessarily reflect the views or opinions of UW-Madison or any of its affiliates.