Farmers, ranchers and other agricultural managers ranked in the top 10 for highest fatality rates by occupation last year.

Read the series: "Matter of Seconds: Injury and death on America’s farms"

Those results mirror findings from 2012, which also ranked the agriculture, forestry, fishing and hunting industry as the deadliest industry.

“Workers are exposed to a number of high injury risk hazards, including farm machinery that have a lot of exposed moving hazardous parts,” said Bob Aherin, an agriculture safety expert at the University of Illinois at Urbana-Champaign.

The Midwest Center for Investigative Reporting and The Iowa Center for Public Affairs Journalism took an in-depth look into agricultural fatalities and injuries in the series: “Matter of Seconds: Injury and death on America’s farms.” The series features pieces on farm-safety regulation, revolutionary safety technology and grain-bin hazards. 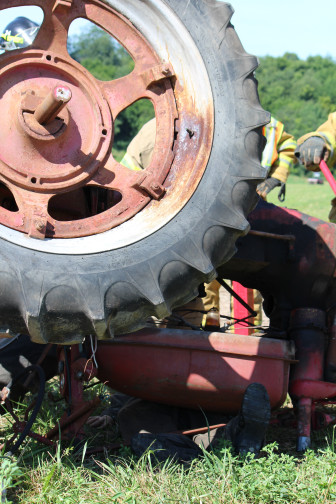 Agriculture has historically been a dangerous field. According to the National Institute for Occupational Safety and Health, 476 farmers and farm workers died from a work-related injury in 2010. That resulted in a fatality rate of 26.1 deaths per 100,000 workers.

“Farming is still predominately family farms in the U.S.,” Aherin said. “Farming is one of the few occupations in this country where families live in the middle of their work environment.”

At a rate of 21.8 deaths for every 100,000 full-time workers, farmers, ranchers and other agricultural managers had the eighth-highest fatality rate by occupation last year.

The Bureau of Labor Statistics derives its data from the Census of Fatal Occupational Injuries. Findings from the census are preliminary at this point.