It’s a hot summer day outside of Lincoln, Neb., and Jack Chappelle is knee-deep in trash. He’s wading in to rotting vegetables, half-eaten burgers and tater tots. Lots of tater tots.

“You can get a lot of tater tots out of schools,” Chappelle says. “It doesn’t matter if it’s elementary, middle school or high school. Tater tots. Bar none.”

Chappelle is a solid waste consultant with Engineering Solutions & Design in Kansas City, Kan. Local governments hire his crew to literally sort through their garbage and find out what it’s made of. On this day, he’s trudging through Lincoln’s Bluff Road Landfill.

“In the country you get more peelings,” Chappelle explained. “You get more vegetables.”

A lot of the waste he finds is food. Food from homes, restaurants, stores and schools.

“When you’re in the city you get a lot more fast food containers with half eaten food in them,” Chappelle says. “A lot more pizza boxes.”

Food is the largest single source of waste in the U.S. More food ends up in landfills than plastic, more than paper.

According to the U.S. Environmental Protection Agency, 20 percent of what goes into municipal landfills is food. Food waste tipped the scale at 35 million tons in 2012, the most recent year estimates are available.

The enormous amount of wasted food is weighing on our food system. An incredible 40 percent of the available food supply in the U.S. is never eaten, according to research funded by the National Institutes of Health. Meanwhile, millions of Americans are going hungry and landfills are filling up.

Like paper, glass and other recyclables, Chappelle says the best option is to keep food out of the landfill where it takes up valuable space.

“From an economics perspective if you don’t throw as much away, the cells don’t fill up as fast so you’re not spending as much money in the operation of the landfill,” Chappelle said. “It’s directly a cost benefit relationship.”

An Abundance of Waste

U.S. shoppers have access to more food than ever before. But they are throwing more of it away, uneaten, too.

“We just have so much of an abundance of food that we don’t realize the value of it,” said Dan Nickey, associate director of the Iowa Waste Reduction Center, which works with businesses to cut back on how much food goes into the garbage. 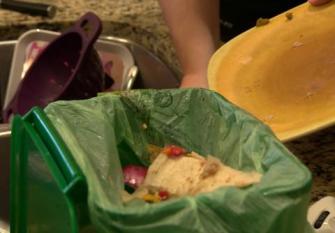 All of the Erkel family’s food scraps go in a green bucket for the weight to be recorded. It makes Sherri Erkel feel guilty so she calls it the “green bucket of judgment.”

“I think it’s part of the culture today compared to when our parents grew up,” Nickey said. “Now we don’t necessarily look at food as a resource, we look at it as a given.”

Not everyone can afford to be careless with food. Forty-nine million Americans have trouble putting meals on the table, 1 in 7 American households, according to the U.S. Department of Agriculture. And Nickey says while those families struggle with food security, food waste is weighing down the economy.

“Forty percent of all the food in this country never makes it to the table at a cost of $165 billion to the U.S. economy,” Nickey said. “If we can reduce the amount of food [waste] just think of the amount of money this country can save.”

Add to the financial price tag the environmental cost. When food decomposes in a landfill it’s sealed away from oxygen. That causes it to release methane rather than just carbon dioxide, which experts say is 20-25 times stronger than carbon dioxide as a greenhouse gas.

Tossed out: food waste in America

Farmers and growers have made gigantic advancements in food production over the last century, ensuring more food flows from farm to table than at any time in human history. Yet, some estimates say as much as 40 percent of the food produced in the U.S. goes uneaten.

Food waste is the single-largest source of waste in municipal landfills. An incredible 35 million tons of food were thrown away in 2012, according to the EPA. As it decomposes in landfills, the waste releases methane and other greenhouse gases into the atmosphere. Meanwhile, 1 in 6 Americans struggles with hunger and the world wonders how to address the challenge of feeding 9 billion people by 2050.

Food enters the waste stream at every link along the chain of food production.

But Ashley Zanolli, who works on food waste for the Environmental Protection Agency, says don’t overlook what might be coming out of your own kitchen.

“Our best estimates are that about 40-50 percent of food waste comes from consumers and 50-60 percent from businesses,” Zanolli said.

In other words, almost half of the U.S. food supply never gets eaten and about half of that waste comes from families and individuals.

Zanolli helped create an EPA program aimed at helping families reduce their share of food that’s wasted called Food: Too Good to Waste. It originated in Seattle, Wash., but there are plans to roll it out nationwide this fall. For now, it is being tested in a handful of cities around the country including Honolulu, Oakland, Calif., and Iowa City, Iowa.

In Iowa City, Sherri Erkel’s family is part of the pilot study, measuring what people are throwing out at home.

On a recent fajita night in the Erkel house, some half-eaten tortillas, picked over beans, onion skins and other scraps went into a plastic container on the kitchen counter. Erkel calls it “the green bucket of judgment.”

Once a week she weighs what they’ve thrown out. She hung the plastic liner from a scale and found they had thrown out 4 pounds of food in just a couple of days.

“These aren’t water melon rinds or anything, so that’s just food on our plate we didn’t eat. So we’ve thrown away 4 pounds of food in two days. (That’s) judgment,” she said, laughing.

Seeing how much food her family throws away convinced Erkel and her family to take food waste more seriously. She wants to put less food in the bucket so she’s following some of the EPA’s tips. For instance, her family started planning meals and following a shopping list. They also set aside a shelf in the refrigerator for what needs to be eaten first.

One in seven families in the U.S. aren’t able buy the kind of food she’s throwing away. Sherri Erkel thinks about her family’s role in that.

“Food production is not an issue,” Erkel said. “We produce enough food but we’re throwing away all this food and a mile away people don’t have enough. So that’s the first step I think.”

And it’s a step more families will need to take.