Veteran award-winning investigative reporter Mike McGraw led a discussion on investigating visas at this month’s Midwest Center for Investigate Reporting’s workshop, “Covering the U.S. visa system in your own backyard.”

The workshop was part of the McCormick Foundation’s Specialized Reporting Institute, administered through Poynter.

During his talk, McGraw drew from his more than 30 years or experience to guide reporters through the process of covering the H-1B and H-2B visa programs, specifically.

“Back in the early 1990s, I heard about this new program called the H-1B permanent visa program, and I became fascinated with it,” McGraw said.

Previously, he worked on the Kansas City Star’s investigations team, where he and a colleague won a Pulitzer Prize for a series about the U.S. Department of Agriculture. 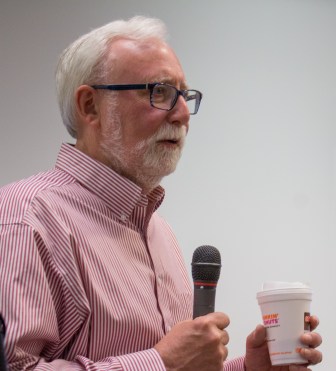 Veteran investigative reporter Mike McGraw speaks to "Covering the U.S. Visa System in Your Own Backyard" fellows on April 11, 2015.

In 1995, he wrote one of the first stories to cover the H-1B program, discovering that the executive branch had hired a number of computer experts from India to run the White House computer system.

One of the major issues in the U.S. visa system is the fact that all the different agencies and departments responsible for administering the visas do not communicate, according to McGraw. When there is inefficiency or problems, it’s often because one agency is simply not talking to another agency.

Another issue is the fact companies are shifting work from domestic employees to foreign employees through corrupt means. For instance, McGraw pointed out that some H1-B employers – required to advertise open positions to American workers before hiring foreign ones – largely hold job interviews at obscure times, such as Christmas Eve.

McGraw said that thorough watchdog reporting on visas is not an attack on immigration. Rather, he said, it’s about making sure the system is working.

“I want the system to work,” McGraw said.

The session took place on April 11 at Columbia College in Chicago. Those not at the workshop can follow some of the conversation and discussion by following the Twitter tag #InvestigateVisas. 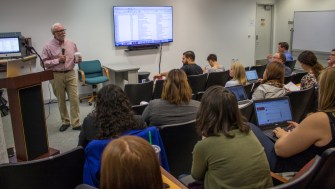 McGraw wraps up his workshop session in Chicago on April 11, 2015.

During his workshop presentation, McGraw pointed out key tools he uses to report on visas.

Reporters need to keep in mind, though, that these resources are only starting points that help uncover the origins of abuse and scandal. To tell the entire story, reporters cannot stop with documents and data.

Instead, they need to “dig deeper” and “go out and get your hands dirty with your own original field work,” according to McGraw.

“The moral is don’t give up on these databases,” he said. “Find other people that want them, call [the keepers of the data] each week, and become their best friend or their worst enemy.”

GAO is the investigative arm of Congress. The office is tasked with looking into federal programs and making sure the government is operating efficiently and fiscally. Throughout the years, GAO has issued several reports criticizing visa programs.

This year in March, the office released a report focused on the H-2A and H-2B visa programs.

In 2007, GAO released a report highlighting fraud risks with the diversity visa program.

In 2005, the office released a report evaluating the EB-5 visa program.

In 2004, GAO released a report arguing that improvements needed to be made to the student visa program for science students and scholars.

The Center for Responsive Politics and lobbying records

The Center for Response Politics maintains a free lobbying tool where reporters can search for specific key words and see how often they have been lobbied on by companies and associations.

A cursory search for the word “visas” shows, for instance, that the issue has been mentioned 152 times by Microsoft Corporation, 89 times by Oracle Corporation and 79 times by the U.S. Chamber of commerce.

Dance USA even mentioned the term “visas” 16 times in its lobbying reports.

Reports looking for direct lobbying records can search for and download them from the U.S. Senate’s lobbying database, as well. Using this government transparency tool, reporters can see which issues a company lobbied on and how much the company spent each quarter.

As a tip when using the lobbying disclosure database, reporters want to look at areas where the client name and registrant name match.

The Department of Labor

Some of the best already available data on visas come from the U.S. Department of Labor directly. A good starting point is its Office of Foreign Labor Certification’s performance data portal.

In addition to the Office of Foreign Labor Certification, the department’s iCERT Visa Portal System features useful data tools, too. Using iCERT’s public job registry, reporters can look up labor contracts in each state and see which companies have registered with H-2B and H-2A visa programs.