The EB-5 visa program, which has grown increasingly controversial due to its lack of quality oversight, basically gives foreigners looking to invest large sums of money in U.S. businesses a pay-to-play green card.

Tim Novak, Chicago Sun-Times reporter, discussed the visa program during a Midwest Center for Investigative Reporting workshop earlier this month. An experienced reporter, Novak usually hunts down stories related to the Daley family, one of Chicago’s most powerful families, “for sport.”

In 2011, he led an investigation of former Chicago Mayor Daley’s nephew. The nephew was responsible for the murder of a young man when he punched him in the face during a street encounter. The investigation contributed to the nephew’s indictment. 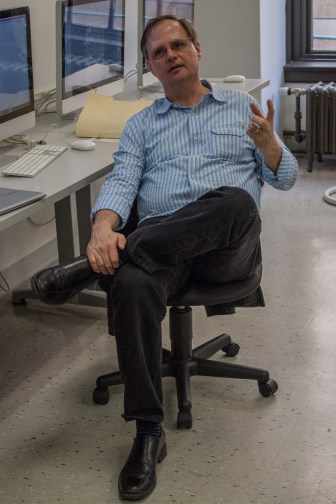 Tim Novak, a reporter for the Chicago Sun-times, discussed one of this recent investigations focused on a former Chicago mayor and the EB-5 program.

This February, he reported on a story about Daley hoping to cash in on green cards. The former mayor was soliciting foreign investors through the EB-5 visa program, according to Novak.

“Tur Partners – which Daley formed with his son, Patrick Daley, after leaving office – has permission from the U.S. Department of Homeland Security to solicit money from foreign investors who would bankroll construction projects or other businesses in the Chicago area in exchange for green cards allowing them to live here forever,” his article said.

Under the EB-5 program, the only promise Daley’s company has to make is that the investment would create at least 10 new jobs within two years in projects approved by the federal government.

Novak said, typically, countries of high growth, such as China, are involved in these investments.

He said every one of the investor’s families receive a green card, as well.

The documents Novak received on the Daley’s company under the U.S. Freedom of Information Act from the Homeland Security Department were heavily redacted.

E-B5 program details and other stories

The U.S. Citizenship and Immigration Services administers the Immigrant Investor Program, also known as the EB-5 visa. Congress created the program in 1990 to “stimulate the U.S. economy through job creation,” according to the services’ website.

To be eligible for the visa, investors must invest in a new commercial enterprise that creates or preserves at least 10 full-time jobs for qualifying U.S. workers. That stipulation must be met within two years.

In those special cases, the minimum investment total is $500,000.

Here are a handful of stories and reports on the EB-5 program:

In 2005, the Government Accountability Office – also known as the watchdog arm of Congress – reported on the EB-5 program with “Immigrant Investors: small number of participants attributed to pending regulations and other factors.”

The citizenship and immigration services also published this overview report, more than 100 pages long, on its EB-5 program.