Each year, thousands of people are allowed to stay in the United States under special visas because they are victims of domestic violence, human trafficking or criminal activity.

Nubia Willman, a staff attorney for the Legal Assistance Foundation of Chicago, spoke extensively about the U-visas and T-visas at this month’s Midwest Center for Investigative Reporting’s workshop, “Covering the U.S. visa system in your own backyard.”

“The majority of my clients are survivors of domestic violence and other serious violent crimes,” Willman said.

The McCormick Foundation and Poynter supported the workshop, which hosted more than two dozen journalists from throughout the country, including reporters from the Associated Press, USA Today and public radio.

The second group is labeled as “undocumented workers,” according to Willman.

U.S. citizens can also petition to have relatives and family members come into the country.

“Being petitioned by a family member is probably one of the most common ways that an immigrant comes into the country,” Willman said. 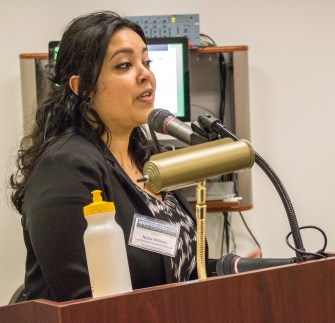 When citizens petition to have family members come to the United States, that citizen oversees his or her own petition and has complete authority to withdraw it at any time, Willman said. Often, this causes immigrants “beholden to” or at the mercy of the petitioner.

After outlining the different ways immigrants can come to the United States, Willman detailed the T-visa and U-visa programs.

Victims of domestic violence or crimes can stay in the country under U-visas. With U-visas, law enforcement officials need to certify that the alleged abuse or crime took place. Furthermore, immigrants pursing a U-visa need to show they have, are or will cooperate with law enforcement efforts.

“For a large amount of reasons, immigrant populations have a high risk of becoming victims of crimes,” Willman said.

Both the T-visa and U-visa allow applicants to pursue work permits.

Willman’s session took place on April 11 at Columbia College in Chicago. Those not at the workshop can follow some of the conversation and discussion by following the Twitter tag #InvestigateVisas.

In addition to her role as an attorney, Willman also trains attorneys, social service providers and law enforcement officials on immigration solutions for domestic-violence and sexual-assault victims.

Willman is the founder and editor of Latinas Uprising, an online community focuses on empowering Latina lawyers.

T-visas are for survivors of sex trafficking and labor trafficking, but the U.S. has yet to issue the 5,000 per year cap #investigatevisas

Human trafficking and the T-visa

A T-visa is designed for people who are coerced or enticed to enter the United States. Once these people are in the country, they are forced to do labor or sex work with no realistic means of escape. Law enforcement officials are encouraged to confirm a visa applicant’s cooperation in an investigation, but that confirmation is not necessary as part of the visa process. Willman said there is an overall hesitancy to prosecute labor-based trafficking cases. The government caps T-visas at 5,000 per year.

A U-visa targets people who qualify as victims of criminal activity and domestic violence. When covering U-visas, it is important for reporters to keep in mind thaw law enforcement officials hold a lot of power during this process. A victim needs confirmation from authorities that they have been helpful in a particular case.

U visa "king" bc so many immigrants are victims of crime, thus qualify. #investigatevisas — Daniel DeMay (@Daniel_DeMay) April 11, 2015

Additionally, U-visa recipients need to have been affected physically or emotionally by the given crime.

Willman said that most T-visa and U-visa recipients are already in the country.

The government caps U-visas at 10,000 per year, a total Willman said is routinely met.