Brant Houston, Knight Chair in enterprise and investigative reporting at the University of Illinois at Urbana-Champaign, opened a Midwest Center for Investigative Reporting workshop on April 11 by noting its sessions would cover the bleak side of visas.

“We’re going to be watchdogs,” he said, “because that’s the only way things get better.”

He talked about different visa stories and introduced the following topics: 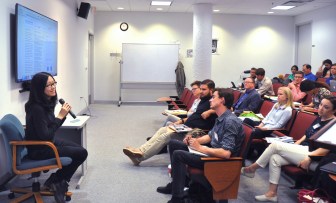 During the "Lightning talks" workshop session on April 11, fellows heard personal experiences on the visa system.

McGraw discussed how employee visas tied to the employer, such as E2 visas, leave the door open for employer abuse and fear of reporting any employer abuse.

For more on the workshop, visit the series page: "Investigate Visas"

“The system provides virtually no protection against employer abuse,” McGraw said. “Leaving the workplace for any reason means losing their legal status.”

Filipino workers recruited with false promises of doubling or even quadrupling their pay at L’Amande French Bakery, filed a lawsuit against the bakery in March.

In addition to working 17-hour work days for the bakery for less than minimum wage, the workers said they had to do construction projects, cleaning and landscaping for the bakery owners for slightly more than $2 an hour.

“Often [visas are] used for cheap labor to cut costs,” he said. “So, follow the money when you’re looking at these visa programs.”

McGraw said, although these programs are riddled with abuses, Congress still allows for thousands of visas to be issued in under-regulated programs every year. It even blocked efforts to protect program abuses. 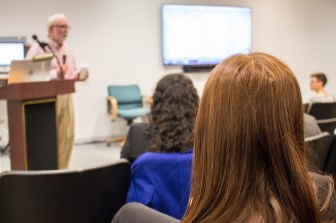 A workshop fellow listens to veteran reporter Mike McGraw talk about his visa-reporting experience on April 11.

“For years, we’ve talked about fixing a horribly broken immigration system in this country,” McGraw said. “And we never fix it. Congress never takes it on.”

Wrapping up the session, Houston said it was key to approach investigations incrementally over time.

“You build story on story,” he said. “You prove your credibility with sources and build trust.”