But powerful agribusiness companies that regularly net billions in profits are major recipients of state and federal tax breaks, subsidies, grants and loans, too. Many call this hodgepodge of funding “corporate welfare.”

Many companies receive welfare, experts say, because of political muscle.

“It is a synonym for what might be regarded as crony capitalism,” said Richard Kaplan, a tax law professor at the University of Illinois at Urbana-Champaign. “Meaning that – because people have particular contacts with certain policymakers – they have received financial benefits that they really shouldn’t have received and were given [benefits] primarily because of who they know rather than what they do or the merits of their particular project.”

A review of data from the national policy resource center Good Jobs First shows that just seven major agriculture-related businesses have received a combined total of more than $596 million in state and local tax breaks, grants, loans and other subsidies in the past few decades.

“When local, state or federal governments provide programs offering incentives to invest, ADM, like other companies, reviews these programs to understand the requirements and eligibility,” said Jackie Anderson, an Archer Daniels Midland spokesperson. “If our business plans align with the program’s requirements, then we apply.”

In addition to state and local funds, the seven companies have also received more than $18.5 billion combined in federal loans and grants, according to the Goods Jobs First data.

Representatives from the companies say the funds encourage economic development, job growth and research. For example, one $56 million grant Monsanto received helped create more than 600 jobs, according to a company spokesperson.

Still, critics argue the mega corporations do not need outside help to boost business.

“When we talk about corporate welfare or business-community tax breaks, what we’re for the most part discussing are special favors provided to, typically, the biggest of the big companies,” Kaplan said.

In order to ensure interests are well-represented in Congress and elsewhere, top companies employ lobbyists to work on their behalf.

“Generally, it’s the companies that can hire the highest-paid lobbyists,” said Josh Sewell, a senior policy analyst with the nonpartisan and nonprofit group Taxpayers for Common Sense. “Those are the ones that get the tax breaks and the most corporate welfare.”

A Midwest Center for Investigative Reporting analysis of the U.S. Senate’s lobbying disclosure database found that Archer Daniels Midland and the six other agribusiness companies spent a combined total of $16.5 million lobbying Congress in 2014 alone. 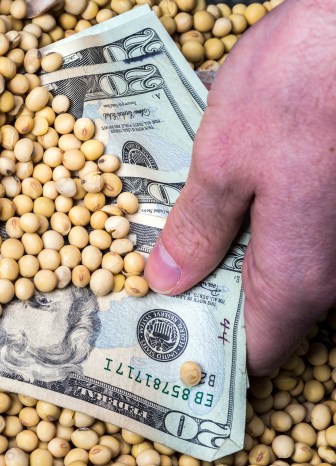 Agribusiness companies receive millions of dollars each year from state agencies and the federal government. The tax breaks, subsidies and grants they receive are in addition to the U.S. Department of Agriculture subsidies for farmers. (Photo illustration taken on March 5, 2015)

Compared to the other companies reviewed, Caterpillar – which works outside the agriculture industry, as well – spent the most lobbying Congress. It reported spending $6.1 million last year, according to disclosure data.

The remaining five companies each spent less than $1.7 million, with Bunge spending the least at $915,000.

“It’s unfortunate, and this is one of those places where you can run across pay-to-play politics,” Sewell said.

“Small business is not organized to the point of having an effective lobbying source that they can ask for these kinds of special favors,” he said. “They also can’t make the contributions to political action committees to get the attention of policymakers.”

Campaign contributions are another way businesses can secure lucrative grants and tax breaks.

“In some cases, there is no good rationale,” Kaplan said. “It’s simply that certain corporations and their lobbyists have provided money for campaigns, and they wanted access, they wanted special favors, and this is payback time.”

Lobbying expenses for ADM, Cargill, Caterpillar, John Deere, Syngenta, Bunge and Monsanto in 2014 broken down by quarter. Data from the U.S. Senate lobbying database. Yearly totals are shown above each bar.