With recent major cuts in funding, the future is unclear for cellulosic biofuels, an energy source researchers have called “the most promising” of all biofuels.

Biofuels are an alternative energy source to petroleum fuel and can be produced from corn, oil or plant material. The fuels are appealing to those looking to reduce carbon emissions and decrease reliance on foreign oil.

BP backed out of $75 million of its $500 million grant for cellulosic biofuels at the Energy Biosciences Institute – a research institution that employs more than 560 people and partners with professors, graduate students and post docs at the University of California, Berkley and the University of Illinois at Urbana-Champaign.

The company is exploring options to divest from several components of its cellulosic biofuels business and investments. It will now focus on building the profitability and scale of its sugarcane biofuels business in Brazil and plans to open a biosciences research center in San Diego.

“While we believe there is good value in lignocellulosic technology, the current challenging external business environment is resulting in tough strategic choices made by businesses across BP,” Jason Ryan, BP press officer, said in an email.

BP made its announcement about the cuts in December, a bad time for one Energy Biosciences Institute principle investigator. 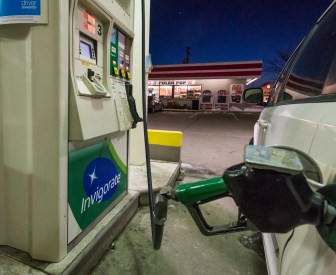 “Most frustrating for me was that just before the decision, we were planning pilot-scale demonstrations of two technologies developed with EBI,” Christopher Rao, a principal investigator for the Energy Biosciences Institute at the University of Illinois, said in an email in February.

He added that the demonstrations would have shown BP how their investments were paying off – but that was before the drop in fuel prices.

In a statement, Chris Somerville, director of the Energy Bioscience Institute, said the cellulosic portion, which made up more than half of its research, would “be phased out in a timely manner.”

Susan Jenkins, managing director for EBI said roughly 15 post docs would not get to finish their research on the Berkley campus. 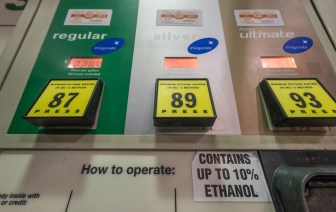 Fuel pumps at an Illinois BP gas station. Under the options, consumers are notified that gas contains up to 10 percent ethanol.

“In my opinion, the decision was entirely due to the drop in gas/oil prices due to fracking (or any other explanation for the price drop), coupled with the weak financial position of BP after the gulf disaster,” Rao said in the email.

BP is facing a maximum fine of $13.7 billion under the Clean Water Act for its 2010 Gulf of Mexico oil spill.

The University of Illinois declined to provide information on funding loss for its portion of the partnership.

“What’s needed [for cellulosic biofuels] is a strong, consistent message at the federal level,” Jenkins said. “Without that, it is difficult for industry and corporations to invest heavily if they don’t know what the future holds."