Last week, Monsanto dropped a nearly $47 billion bid for its Swiss competitor Syngenta after months of pursuit and a recently upped offer.

The merger would have combined Monsanto’s portfolio of seeds and genetically engineered traits with Syngenta’s portfolio in agricultural chemicals. 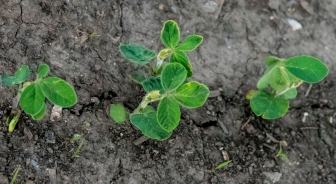 Soybeans sprout out of the dirt on an Illinois farm on May 29, 2015. Nearly every single soybean acre planted in the United States is planted with genetically engineered seeds.

“The proposal deal, first made public in May, would have created an agricultural behemoth with the largest market share in the world in both seeds and agricultural chemicals,” The New York Times reported.

Some Syngenta shareholders were opposed to the company’s refusal to open a dialogue with Monsanto about the merger, the Wall Street Journal reported.

“Most of the investor community cannot understand why they are not sitting down, or sitting together at a table and starting to talk to one another,” Martin Lehmann of 3V Asset Management, a Zurich-based firm the owns Syngenta shares, said in an interview with the Wall Street Journal.

Syngenta officials repeatedly voiced that Monsanto was not offering a fair price for the company and was trying to buy it on the cheap.

“We engaged Monsanto in good faith and highlighted those key issues which required more concrete information in order to continue a dialogue,” Syngenta Chairman Michael Demare said in a statement.

“Our board is confident that Syngenta’s long-term prospects remain very attractive with a leading portfolio and a promising pipeline of new products and technologies,” he said.

It said the average acceptable price for investors was 473 Swiss francs, just slightly more than the 470 per share in Monsanto’s recent offer.

Monsanto said it would focus on growth opportunities within its existing business and would resume share buybacks when it was practical.

Read related: "GMOs, Monsanto and the fight against climate change"