Genetically modified organisms, or GMOs, have been at the core of some of the loudest and most visible debates in the past few years.

As reported by The New York Times in September 2015, industry groups on both sides of the issue – the biotechnology industry and the organic industry – have even funded researchers through special grants.

While you are waiting for your FOIA requests to come through, here are eight quick tools to use to research GMOs and the companies that engineer them.

To see how we used them, check out: “Monsanto inches closer to biggest biotech launch in company’s history” and “GMOs, Monsanto and the fight against climate change.”

The U.S. Department of Agriculture is part of the regulatory system known as the 1986 coordinated framework for biotechnology.

One of its agencies, the Animal and Plant Health Inspection Service, is responsible for determining whether new biotechnology products would pose plant pest risks if they became commercially available. Whenever a seed company – such as Monsanto, for example – has a new type of GMO, it must submit a formal petition to APHIS in order to get that variety deregulated.

After receiving the petition, APHIS compiles and publishes a risk assessment.

The petition and the risk assessments are two great places to get detailed information about a specific GMO, including what exactly the companies did to engineer it. Both of the documents also highlight any possible risks that may be associated with the GMO, including environmental and economic risks.

The agency also opens up periods of public comment when individuals and organization can express concerns related to the new biotech product.

Once comments are considered, APHIS released its final decision.

The agency updates an online table where reporters can see what products are doing through the petition process. The table links out to all relevant documents, as well.

A screen grab from the Animal and Plant Health Inspection Service website. The image shows how the agency keeps track of all biotechnology requests for deregulation.

In addition to ruling on petitions, the USDA agency is also in charge of overseeing experimental biotechnology products being tested through special notifications and permits.

Permits are submitted by companies and require USDA approval before the testing process.

Notifications are streamlined permits where companies simply have to notify the USDA they are testing biotechnology.

The Environmental Protection Agency, and the Food and Drug Administration are also part of the regulatory framework.

As part of the GMO regulatory process, new genetically engineered varieties are open to public comment.

Reporters can read through these comments on regulation.gov.

Comments can lead to original and interesting story ideas.

For instance, in a comment submitted in relation to a type of corn engineered by Monsanto, two grain associations wrote that, if deregulated, the corn could have all sorts of economic and marketing consequences.

Comments also help provide a barometer for how hot a certain GMO issue may become.

Some products up for deregulation only net a handful of comments, while others net thousands.

The Economic Research Service keeps track of agriculture-related statistics, including figures on GMOs. 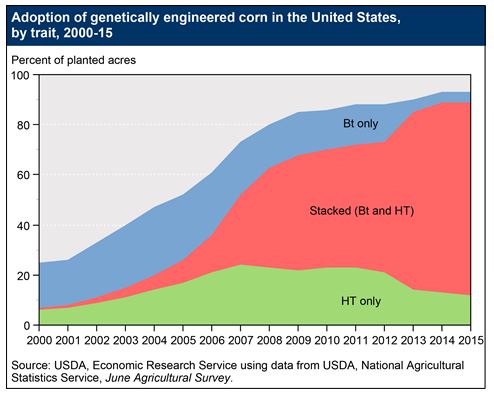 A screen grab from the U.S. Department of Agriculture. The graphic shows adoption rates of genetically engineered seeds in agriculture.

Data on the extent of GE adoption

The First Decade of Genetically Engineered Crops in the United States

Economics of Glyphosate Resistance Management in Corn and Soybean Production

These reports and others provide reporters with an overall picture of what the GMO landscape looks like.

Want to know how many states have introduces legislation looking at GMO labeling?

By typing in a keyword, reporters can see what legislation has been introduced where – on both a state-level and national-level.

Scout can even help journalists looking for a good speech from a policymaker on GMOs.

Often, journalists write about GMOs in a vague fashion, grouping all types together under one label.

Yet, reality is much more complex, and there are vastly different kinds GMOs.

Search a company’s news releases and website for product updates.

If a company has a “company documents” section, that’s always a great place to look.

Annual financial filings submitted with the U.S. Securities and Exchange Commission will also have information detailing a company’s research and development efforts.

Remember, most of the biotech companies are publically traded, meaning they’re bound to federal disclosure laws.

Check out this graphic from the Cornucopia Institute.

Lobbying records can show reporters where companies are spending their lobbying dollars.

Search through the raw lobbying database by client name to pull up records from a specific company.

Instead of using the raw look-up tool, reporters can also use services that help pull the information together and make meaning out of it. MapLight has one quick and easy tool that shows total lobbying expenditures broken down by quarter.

OpenSecrets.org has another useful tool.

Lobbying expenditures is especially interesting when it comes to GMOs and policy.

The Safe and Accurate Food Labeling Act of 2015 is an overarching piece of legislation backed by those who opposed mandatory labeling laws.

Lobbying disclosure forms can show which companies lobbied on that issue.

The Midwest Center for Investigative Reporting put together a tool that helps visualize GMO petitions for deregulation.

A screen grab from the Midwest Center for Investigative Reporting's website.

One part of the tool is a graphic that visualizes which GMOs have been deregulated by crop or by company. To see the breakdown by crop, select "Crop" in the "Choose information to see" window.

To see the breakdown by company, choose "Institution."

The number in parentheses (#) represents the number of petitions filed with the USDA.