History of scandal holds back progress on transparency

Four of the seven Illinois governors elected from 1960 through 2006 went on to serve time in prison, so it’s no surprise that Illinois has developed a reputation more criminal than credible.

Nor is it surprising that Illinois earned a D+ in the State Integrity Investigation, an assessment of state government transparency and accountability by the Center for Public Integrity and Global Integrity.

Its numerical score of 67 placed Illinois 13th in the country (tied with Colorado). That’s a modest drop from the initial study — published in 2012 —when the state ranked 11th with a 74.

The State Integrity Investigation is a data-driven assessment of state laws and practices that deter corruption and promote accountability and transparency by the Center for Public Integrity and Global Integrity. Read more about the investigation here.

The two scores are not directly comparable, however, due to changes made to improve and update the project and methodology, such as eliminating the category for redistricting, a process that generally occurs only once every 10 years.

But it isn’t just gubernatorial convictions or empty promises of reform that shoved Illinois down on the integrity scale. The state has problems — and its lack of transparency, access to information and ethics are all too real.

The recent departure of Phyllis Wise from her position as chancellor of the University of Illinois reveals several of these problems.

Wise resigned suddenly in early August, just one day before the university released results of an investigation into the use of private email accounts by administrators and faculty to keep conversations over university business out of the public eye.

The release showed more than 1,000 private emails — some of which discussed the appointment of professor Steven Salaita, who lost a pending teaching job with the university after he shared controversial tweets on social media in 2014. Previously, the emails had been withheld from responses to Freedom of Information Act requests.

Wise even admitted deleting some of the emails and using her private email account to avoid disclosing her communications.

Salaita has since filed a new motion to preserve the emails as part of his ongoing lawsuit against the University.

The lack of transparency is not uncommon in Illinois, said Jacob Huebert, a senior attorney with the Liberty Justice Center, a public-interest advocacy group based in Chicago.

“All too often, no one is policing this sort of thing,” Huebert said.

Illinois has 7,000 public bodies that can often deny Freedom of Information Act requests without providing justifiable reasons why. They regularly claim requests are unduly burdensome or only fulfill a portion of the request, misusing the state’s open records exemptions.

And worse, the state lacks any real teeth to enforce its open records laws. 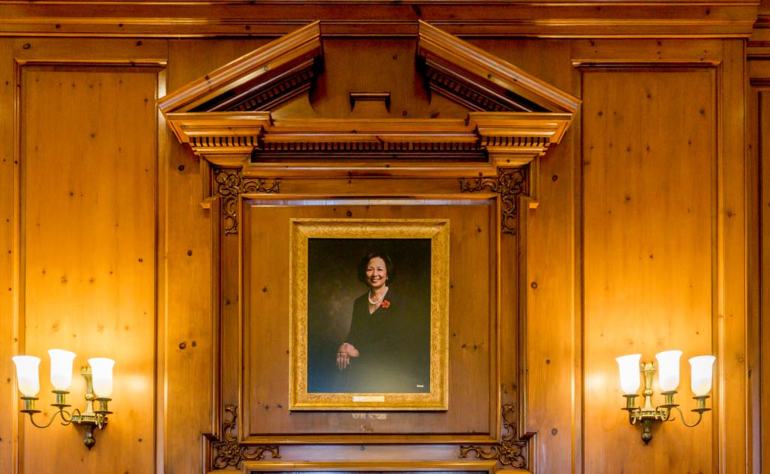 A portrait of former UIUC Chancellor Phyllis Wise on Nov. 3, 2015.

Outside of the threat of a lawsuit, there are no real penalties for unjustifiably denying a request for public information.

“Public bodies commonly invoke exemptions and put the burden on the requester to challenge that either through a public access [process] or through a lawsuit, which of course many people are not prepared to do,” Huebert said.

Lawsuits are expensive and time-consuming, he said, and can also be a tool used to stall releasing requested information. If a suit takes long enough to be resolved, the information requested may no longer be relevant.

“It reflects the attitude that government officials seem to have that the public is their adversary,” Huebert said, and “this shows the lengths they will go to do that.”

But lack of public access to information is just one of the state’s many challenges.

At the time of writing this article, the state was three months into a new fiscal year — which began on July 1 — and still had no budget in sight.

Yet buses were still running, the department of motor vehicles remained open and a majority of the bills were being paid.

“Right now, we are in an Alice-In-Wonderland kind of world, because to me, the government continues to operate despite the fact that there is no budget,” said David Merriman, co-director of the Institute of Government and Public Affairs’ Fiscal Futures Project, which models the Illinois state budget.

To calculate the state’s true spending can take a year, he said, after tracking movement between budgets and funds over time.

“In an absolute sense, the budget is terribly difficult to understand and not very transparent,” Merriman said.

Not surprisingly, Illinois got an F in the category grading budget processes, earning the fourth worst score in the nation. Part of the problem is a very large share of the spending takes place outside of the state’s general fund, for example through special funds.

Even today, many of the state’s bills and obligations — such as to union workers — are being paid under a court order versus an appropriations bill as legislators grapple with a formalized spending plan.

Merriman said national research shows that during periods of fiscal stress, lawmakers will move money between the state’s general fund and special funds, which makes it harder to track spending.

And, he said, “Illinois has been in periods of fiscal stress for a long time.”

This makes it much harder for someone else — such as John Q. Public who doesn’t study the state budget for a living, or even legislators — to understand it.

But there is a movement to make the state budget more understandable and uniform in how it is reported, he said. “And we’re not there yet.”

This story is from the Center for Public Integrity, a nonprofit, nonpartisan investigative news organization in Washington, D.C. It is part of State Integrity 2015. How do each state's laws and practices deter corruption, promote transparency and enforce accountability? Click here to read more stories in this investigation.