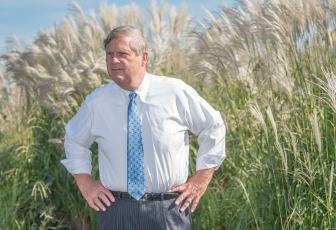 U.S. Secretary of Agriculture Tom Vilsack listens to a researcher on Sept. 10, 2015. He was at the UI Energy Farm just south of Urbana, Illinois.

Perdue — a former Georgia governor who has also worked as a veterinarian and ran his own grain and fertilizer business — is the only Trump Cabinet nominee to secure support from his Obama administration predecessor. It is unknown when Perdue’s confirmation hearing will take place, though some reports speculate it could be delayed until mid-to-late February.

“I have had the opportunity to work with Governor Perdue and know how committed he is to all of our farmers, ranchers and producers regardless of size or production method,” Vilsack said in a statement. “As a former governor, he knows full well the opportunities and challenges that exist in rural communities.”

Vilsack touted Perdue’s familiarity with agriculture and rural communities as reasons for his endorsement. The former ag secretary also said that he believes Perdue will pay attention to the “many and varied interests” that depend on the U.S. Department of Agriculture, which oversees programs related to childhood nutrition and affordable food.

Despite Vilsack’s endorsement, many have criticized Trump’s pick to lead the USDA because of Perdue’s history of climate change skepticism.

In 2014, Perdue wrote in an op-ed in the National Review:

Conservatives throw up their hands when some on the left or in the mainstream media explain every deviation in weather as a consequence of climate change. Climate change, we’re told, is responsible for heavy rains and drought alike. Whether temperatures are unseasonably low or high, global warming is the culprit. Snowstorms, hurricanes, and tornadoes have been around since the beginning of time, but now they want us to accept that all of it is the result of climate change.