In the summer of 2012, Illinois experienced its worst drought in decades, and water shortages occurred across the state, leading to conflicts between the needs of farmers, residents and commercial users.

The Sangamon River ran dry near Monticello for 16 days for the first time in recorded history.

The city of Decatur was forced to operate its emergency well system and put in restrictions including prohibiting watering of lawns and the closing of commercial carwashes.

Nuclear power plants across the state had to reduce their output because of water supply issues.

Farmers received the brunt of the drought; corn and soybean crops produced far smaller yields than the year before, many livestock farmers were forced to liquidate their herds and many private rural wells had to be lowered.

Experts worry that a statewide increase in agricultural irrigation will deplete overall groundwater resources in the future.

“There has been more water use from aquifers that aren’t going to be able to support (additional growth) down the road,” said Steve Wilson, a groundwater hydrologist at the Illinois State Water Survey, who made it clear that this has not yet happened. “You can only use so much groundwater without dewatering an aquifer.”

During the 2012 drought, Champaign County farmer Mark Pflugmacher saw firsthand the value small amount of water can have on a crop.

In a 290-acre plot just east of Gifford, Ill.,  Pflugmacher made 50 bushels of corn per acre.

About 20 miles south, a field he farms near St. Joseph got four-tenths of an inch more of rain. The yield almost quadrupled at 190 bushels an acre.

Federal crop insurance and high commodity prices more than made up for some of the lower yields in 2012. Pflugmacher made enough money to reinvest in his business, and he knew what to spend it on – an irrigation system for the 290-acre field that would serve as a protection against future droughts.

Pflugmacher wasn’t alone in his investment. Almost 1,000 pivots – quarter- or half-mile pipe irrigation systems that turn in a circle sprinkling water on crops – have been installed across Illinois since the 2012 drought as a result of higher crop prices and the demand of seed corn companies.

These new installations make up one out of every six systems in the state. Additionally, much of the growth is taking place in areas that haven’t traditionally needed irrigation.

Agricultural irrigation is a major user of water, equaling the use of almost 2 million people each year in Illinois. It is a unique user because the water is used all at once and at times when the need for water is greatest.

For example, during peak uses, the 70 irrigation pivots in Champaign County use more than double the amount of water in a day than the entire Champaign-Urbana community.

While Illinois is considered a “water-surplus state,” the State Water Survey said it will need up to 50 percent more water in the coming decades, largely due to a growing population.But couple the boom in irrigation with scientists’ predictions that Illinois’ future climate could resemble that of dry, hot northern Texas with longer droughts and more flooding, the need for sufficient groundwater will increase.

Even in a year like 2017, when precipitation was above average in April and May, causing some farmers to replant, a lack of rain in June caused concerns about a drought, an analysis from Illinois State Climatologist Jim Angel found.

Already, some Central Illinois farmers are running their irrigation systems.

While the severe water shortages were attributed to a lack of winter storms preceding the 2012 drought, irrigation undoubtedly lowered groundwater levels in Illinois, said George Roadcap, a groundwater hydrologist at the Illinois State Water Survey.

However, it’s almost impossible to tell how much because of a lack of reporting by farmers, ineffective legislation and stalled water supply planning efforts.

Without this information, experts are unable to know how the aquifer will behave in the future, as water usage increases, Roadcap said.

By requiring irrigation use to be reported, experts can advise irrigators on how deep to build their wells, to better know how irrigation would impact city water supplies and to better track the overall fluctuation in water tables.

Experts can also track how large users, like an ethanol plant, would significantly impact the water table in certain areas.

“You don’t run out of water, you impact your neighbor,” Roadcap said.

When irrigation systems are operating, water levels under Champaign County can drop as far as 40 feet. Compare that to the sandy soils under Mason County, where the pivots only change water levels about 8 inches.

“As soon as (the system) all turns off, (the water level) comes back up,” said Wilson, who oversees irrigation reporting for the water survey. “It isn’t a permanent problem.”

But this fluctuation can mean that wells that aren’t drilled deep enough run dry during peak water usage, impacting not only private homeowners but potentially entire communities who would have to incur high costs if water ran dry.

For example, the city of Decatur spent $90 million dredging Lake Decatur deeper after running low on water in 2012.

So far, much of these effects have been mitigated by a slow increase in irrigation but with booms in installations like the one after the 2012 drought, higher fluctuations are possible.

“If the irrigation all came in at once, it would be a disaster, but if it increases over time, you only impact a few wells,” Roadcap said. “Certainly those homeowners would be affected, but I don’t know how easy it is to connect the dots between the well running dry and the irrigation system that just went in next door versus the collective impact of all irrigation systems.”

Water use not always reported

Since 2015, irrigators have been required to report the amount of water they use to the Illinois Water Inventory Program. However, there is no penalty for not reporting, and the program has been slow to take off, Wilson said.

“There’s no teeth in the law,” he said. “If an irrigator or a community decides not to report, we can call them and ask them to report, but that’s it.” 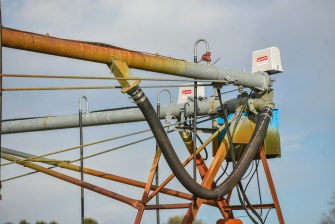 Currently Wilson estimates only 15 percent of farmers independently report irrigation totals. Additionally, 30 percent of irrigators report to the Imperial Valley Water Authority in Mason and Tazewell counties (where the majority of irrigation is), which in turn reports the total amount of water used for irrigation in aggregate.

This information is available in aggregate, but it isn’t helpful because the State Water Survey doesn’t know where the irrigated acres are or how much water is used on each acre.

The federal government is not allowed to disclose individual irrigator information to anyone, including state governments and the public via Freedom of Information requests, because this could be considered proprietary information.

“The farm community argues that how much water you use, how much pesticide you apply, that’s a business decision,” Wilson said. “If you know how much your neighbor irrigates and when and why, it might give you a competitive advantage.”

Additionally, Illinois water experts caution against these numbers to judge the impact because the amount of water used for irrigation varies significantly each year, and these numbers do little to show the true effect of agricultural irrigation on the water supply.

Even though irrigated acres have grown, irrigation systems have not been used as frequently since 2012 because of adequate rainfall.

For example, in 2012, the Imperial Valley Water Authority used 92 billion gallons, despite making up just 30 percent of irrigators in Illinois, a number significantly higher than 2013, even though it was before the boom in irrigation system installation.

Many farmers have no interest in reporting their irrigation totals, especially because they already report it to the federal government, Wilson said.

“A lot of farmers feel like the government has impinged on their rights plenty and choose not to report,” said Wilson, who stressed that reporting will only benefit farmers. “They’re worried more water law, and that this information will be used against them to limit how much  they pump or prevent them from being able to pump in the future.”