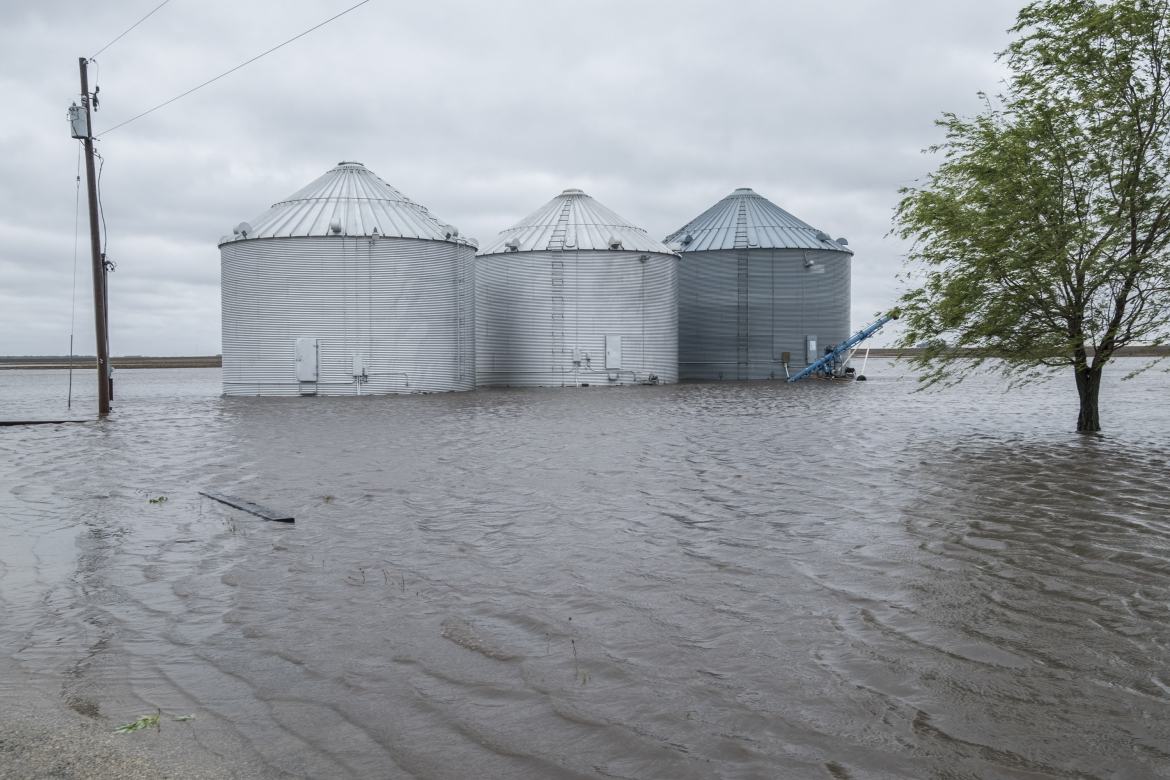 Water from a field has surrounded bins and flows over a road just north of Tuscola, Ill., along US 45 on May 4, 2017.

Increased drought, unsustainable irrigation and changing crop patterns are among the impacts that the agriculture sector will confront as the climate changes, according to a draft federal climate report published by The New York Times on Tuesday.

The special report of the National Climate Assessment finds that the earth’s climate is rapidly warming and humans are primarily responsible.  The average temperature in the world is projected to reach an additional 2 degrees Celsius, the report finds.

The report, which has not been finalized and an earlier version of which were available online for public comment between December and February, is awaiting approval from the White House.

Don Wuebbles, one of three lead coordinating authors of the report, is a professor at the University of Illinois. He declined comment until the report is finalized.

According to the Times story, scientists were concerned that the report would be suppressed. Many members of the Trump administration, including the president himself have publicly expressed doubt about climate change, particularly human influence on the climate.

But the report finds, with “very high confidence,” that humans are responsible.

“Many lines of evidence demonstrate that human activities, especially emissions of greenhouse gases, are primarily responsible for the observed climate changes in the industrial era. There are no alternative explanations, and no natural cycles are found in the observational record that can explain the observed changes in climate,” the authors write.

The agriculture sector is no different; farming is responsible for much of the increased carbon dioxide in the atmosphere, and producers are likely to be harmed by the warmer atmosphere, the report finds.

"Recent studies indicate a correlation between the expansion of agriculture and the global amplitude of CO2 uptake and emissions. Conversely, agricultural production is increasingly disrupted by climate and extreme weather events, and these effects are expected to be augmented by mid-century and beyond for most crops," the authors write. "Precipitation extremes put pressure on agricultural soil and water assets and lead to increased irrigation, shrinking aquifers, and ground subsidence."

Much of the United States will see a longer growing season, allowing changes in cropping patterns or multiple harvests, the report finds. But in addition to warmer temperatures, crops will also have to adapt with higher carbon dioxide concentrations in the atmosphere that will "extend the active period of growth by plants.”

“Longer growing seasons can also limit the types of crops that can be grown, encourage invasive species or weed growth, or increase demand for irrigation, possibly beyond the limits of water availability,” the authors wrote. “They could also disrupt the function and structure of a region’s ecosystems and could, for example, alter the range and types of animal species in the area.”

The report finds that recent droughts in the United States have “reached record intensity in some regions of the United States, but, by geographical scale and duration, the Dust Bowl era of the 1930s remains the benchmark drought and extreme heat event in the historical record.”

But whether humans have increased the likelihood of drought is less clear.

“The human effect on recent major U.S. droughts is complicated,” the authors write.

The report said that there is little evidence linking humans and a lack of rain, but a significant amount of evidence linking increased evapotranspiration caused by higher temperatures linked to human activities.

The report also finds that “the future normal condition would be considered drought at the present time, and that the incidence of ‘extreme drought’ would be significantly increased.”

Already, extreme rain events that have caused more frequent flooding in the central United States have been linked to a warming atmosphere, the report finds.

Still, an uptick in precipitation is unlikely to mitigate the increased drought.

“Future higher temperatures will likely lead to greater frequencies and magnitudes of agricultural droughts throughout the continental United States as the resulting increases in evapotranspiration outpace projected precipitation increases,” the authors write.

The report also finds that an increase in population is likely to lead to changes in land usage that could impact agriculture and increase the likelihood of climate change by leading to increased deforestation.