After Monsanto introduced Roundup Ready corn and soybeans in the mid-1990s, the use of glyphosate skyrocketed.

Currently, more than 90 percent of fields grow crops that won’t die or face damage from glyphosate, and the herbicide is the most widely used in the country.

But “superweeds,” like Palmer amaranth, developed a resistance to glyphosate – the key ingredient in Roundup – after years of overuse.

To combat the weeds, Monsanto and other companies began researching soybean resistance to other herbicides that would kill the weeds but not crops.

In 2016, Monsanto released its dicamba-resistant soybeans in the company’s largest ever rollout of a new biotechnology.

But its accompanying herbicide – XtendiMaxTM herbicide with VaporGripTM Technology – was not approved by the U.S. Environmental Protection Agency until several months later, leading some farmers to use other versions of the herbicide on their soybeans.

In 2016, the complaints increased, and in 10 states farmers filed lawsuits against Monsanto alleging the company was responsible for illegal spraying of dicamba by releasing its seeds without its herbicide.

In Arkansas, a dispute over the use of dicamba led one farmer to kill a neighbor who sprayed the herbicide on his crops that then drifted into the farmer’s field.

In 2017, the complaints increased, even after Monsanto and BASF released their EPA-approved herbicides.

In June, farmers in Arkansas filed a lawsuit alleging that Monsanto and BASF are responsible for the drift because their product caused the damage.

But if applicators don't follow the directions, it's their fault, said Aaron Hager, a crop science professor at the University of Illinois. 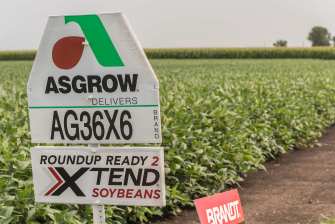 "(Companies) can't be held responsible for the misuse of a product. If you buy a car, you can't sue because you backed into a pole," Hager said.

If pesticide applicators follow the directions on the label, it's the responsibility of the company, Hager said.

However, farmers have alleged that it might be impossible to follow the instructions on the label, considering how complex it is, according to a Reuters investigation.

Have you experienced pesticide drift? Share your story with us and one of our reporters may contact you by email to learn more.

A report published by Reuters showed that Monsanto took an unusual route to getting its dicamba formula approved that included little oversight from the EPA and a ban on researchers, including Hager, from testing the volatility.

“It’s touted to be lower volatility. There is no data on that. You have to take them at their word. I’m not going to argue or refute that,” Hager said. “But they still have volatility.”

In its August 23 news release, Monsanto addressed concerns about researchers’ ability to test the volatility. Monsanto said it twice hosted weed scientists at an academic symposium devoted to the testing of the herbicide called XtendiMax. It also said scientists in multiple states are conducting volatility tests.

“We acknowledge there are university weed scientist that wanted additional opportunities to evaluate the product, and we will continue to look for ways to collaborate,” the news release said.