Like many in Minnesota’s Hmong-American community, Pakou Hang comes from a family of farmers. “Even when we very young, starting from elementary school, we were helping our parents out in the field,” she said. “So it’s been a big part of our lives and we have that background.”

Which is why, despite working in politics and as a community organizer for much of her career, Hang decided to study some of the challenges that Hmong farmers were facing when she was named a Bush Leadership fellow several years ago.

After she began conducting interviews with the farmers, she quickly came to realize that many Hmong farmers had similar challenges, often around access to land, markets and programs designed to help the state’s farmers, including training materials — since they were all in English.

This story was originally posted on MinnPost.com.

From those initial talks, Hang saw that the farmers were determined to succeed — but that there was a place for an organization could bring them together and help them along. So in 2011, Hang and her brother, Janssen Hang, co-founded the Hmong American Farmers Association, where Pakou Hang now works as executive director.

“The creation of HAFA really was an act of self-determination, where people were saying, ‘We can save ourselves,’” she said. “We know what the problem is and we know what the solutions are and we have to work together.”

Today, HAFA includes more than 100 farmers and is tackling the kind issues that have been problems for decades — things like not having access to land or government programs designed for large commodity farming instead of small specialty crop farming — the kind of farming that most Hmong farmers engage in. It's also poised to do a lot more in the coming months and years. In mid-November, HAFA was named as one of the winner's of this year's Bush Foundation Prize for Community Innovation, which comes with an award of $247,525.

Multiplying prosperity for the entire community

Once HAFA was able to identify the systemic problems facing farmers, it wanted to make sure it created systemic solutions to deal with those issues. For the farmers to do well and thrive year after year, the whole model for Hmong farmers had to be addressed, said Hang.

One of those systemic solutions was to get HAFA members to embrace the idea of building community wealth. So the group formed a land cooperative with members after purchasing a 155-acre farm in Dakota County. There, members can lease land and sell their produce to a HAFA food hub that sells their products through community-supported agriculture shares, schools and grocery stores.

“When we think of traditional economic development, we often ask ‘Who can we attract to our community,’ right? … What we’ve done at HAFA is say, ‘Let’s look at who lives in the community right now and ask them about their hopes and challenges and how do we build them up,” Hang said. 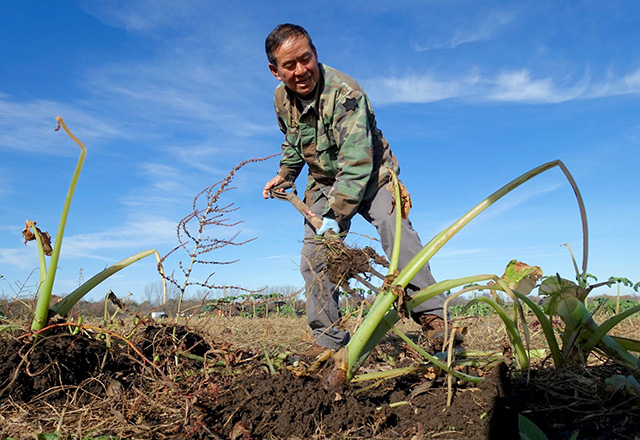 For the farmers to do well and thrive year after year, the whole model for Hmong farmers had to be addressed.

Among other things, Hang said HAFA’s community wealth development is about making sure people know how crucial Hmong farmers have been in building the Twin Cities’ local food economy. Indeed, Hmong American farmers today make up more than 50 percent of all the farmers in metropolitan farmers markets.

Since its inception, HAFA has seen the effects it’s had on the farmers and the community it serves, but the Bush Foundation award came as a surprise, said Hang. Duchesne Drew, Community Network Vice President for the Bush Foundation, said that the reason HAFA stood out was because they were able to demonstrate that they do their work in an collaborative and resourceful manner. “It’s in their DNA,” said Drew. “It’s who they are. Their work is changing lives and changing systems by creating a more equitable environment for Hmong farmers.”

Hang believe that the possibilities of what HAFA can do not just for the Hmong community — but for the local food economy — are endless. “I hope that HAFA helps spur a revitalization of what we think of as wealth in our community,” she said. “That it’s not just about income that I’m earning myself, it’s about what I’m building to multiply prosperity for the entire community and to lift others up as well.”

MinnPost is a nonprofit, nonpartisan media organization whose mission is to provide high-quality journalism for people who care about Minnesota.