The U.S. Environmental Protection Agency lessened protections for crops and wildlife habitats after Monsanto supplied research that presented lower estimates of how far the weed killer dicamba can drift, according to a review of federal documents.

In its final report approving the usage of dicamba on soybeans, the agency expressed confidence that dicamba, new versions of which are made by Monsanto and German chemical company BASF, would not leave the field. The registration covered both herbicides, an EPA spokesperson said.

“The EPA expects that exposure will remain confined to the dicamba (DGA) treated field,” the agency wrote in the final registration approving the use of dicamba in November 2016.

However, drift from dicamba damaged more than 3.6 million acres of soybeans in 2017, according to data from Kevin Bradley, a professor at the University of Missouri.

The drift also allegedly damaged oak trees, wildlife habitats and other crops, such as vineyards, across the Midwest and South, according to news reports, environmental groups and complaints filed with state agencies. 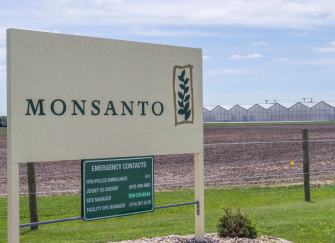 A Monsanto facility in Jerseyville, Illinois.

Monsanto submitted its research after the U.S. EPA proposed in March 2016 an all-directional buffer zone for dicamba to help protect other crops and wildlife habitats for endangered species. After considering the information, the agency decided to reduce the buffer zone to only a downwind buffer zone, meaning spraying limitations only applied to the downwind edge of a field.

When asked questions by email about Monsanto research on the drift, Monsanto spokeswoman Charla Lord replied in an email: “Thanks for reaching out. You can find information about Monsanto at www.monsanto.com.”

Usage of dicamba increased greatly after the U.S. EPA approved new versions of the herbicide in November 2016. For the first time, it could be sprayed on soybean and cotton seeds genetically engineered to withstand the herbicide. The companies touted their new formulations of dicamba, a traditionally very volatile chemical, as less prone to move off target after application.

An agency spokesperson said it was “standard practice” to provide a proposed regulation to the public for comment and then follow it with a final decision that incorporated new information received during the comment period.

After reports of widespread damage last year, however, the U.S. EPA increased regulations on dicamba in October, naming it a restricted use pesticide and limiting the conditions in which it could be sprayed. The buffer zone was not changed. Many states have issued additional restrictions.

In its March 2016 registration, the agency proposed a buffer zone to provide protection for “sensitive areas,” which are areas that host species that are protected under the Endangered Species Act.

The proposal had a 100-foot all-direction buffer, meaning that applicators could not spray dicamba within 100 feet of the edge of a field. If dicamba is sprayed at higher concentrations, the buffer would be increased to 220 feet.

The agency found that the buffer zone was necessary because of “past experience with other dicamba formulations and associated spray drift incident reporting,” according to the proposed registration.

In the EPA’s final registration, which was published on November 9, 2016, the agency changed the all-directional buffer to a 110-foot downwind buffer, meaning that applicators could not spray dicamba within 110 feet of the downwind edge of the field.

“Monsanto responded to these concerns with an additional submission post-proposal that acknowledged the long-recognized volatility of dicamba acid and described measurements of the volatilization in the different formulations,” the agency’s final registration said.

Between the two registrations, Monsanto submitted studies conducted in Georgia and Texas, which were states that received zero complaints about dicamba in 2017. Those studies found that drift and volatilization was minimal.  Based on those studies, the EPA found “the 110-foot omnidirectional buffer for volatilization is no longer warranted.”

Daguillard, the EPA spokesman, pointed out that the Federal Insecticide, Fungicide, and Rodenticide Act. which regulates pesticides, requires companies to perform safety studies.

“Thus, the pesticide companies, rather than the taxpayers, shoulder the cost of performing the safety studies on pesticides required by EPA,” he said. “EPA, however, has extensive requirements in place to ensure that the data generated by pesticide companies are scientifically sound and provide sufficient information to assess the potential risks of a pesticide.”

He said that EPA scientists rely on more than just these studies, including “other governments, academia, and published scientific literature.”

“EPA maintains a transparent, public process for assessing potential risks to human health and the environment when evaluating pesticide products,” he said.

However, research conducted in 2017 at the University of Arkansas found that dicamba drifts up to 220 feet, more than double the EPA buffer zone. 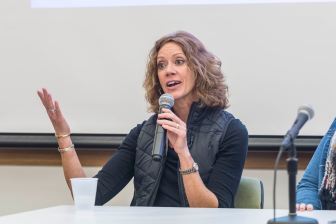 Jean Payne, president of the Illinois Fertilizer and Chemical Association, speaks at the Champaign Public Library on February 22.

Pesticide applicators, the Illinois Department of Agriculture, BASF, Monsanto and the U.S. EPA were all aware of the risks that dicamba posed to sensitive areas that are home to wildlife habitat for endangered species, according to a February 23, 2017, email written by Jean Payne, president of the Illinois Fertilizer and Chemical Association. The association includes pesticide applicators and chemical companies.

“Roadside ditches, grass field borders, treelines or shrubs/bushes in field borders, etc. ARE sensitive areas,” Payne wrote, saying she had confirmed that information with Dan Kenney, branch chief of the herbicides division of the U.S. EPA. “He said they had to do this to meet Endangered Species demands (from lawsuits) put upon them with regard to the issuance of these new labels.”