The Illinois Environmental Protection Agency has slashed its staff almost in half over the past 15 years, resulting in less monitoring of environmental health and safety throughout the state.

Overall, the number of full-time employees at the agency has dropped from 1,260 in 2002 to 635 last year, according to state records.

The environmental agency has steadily lost manpower and support since former Gov. Rod Blagojevich took office in 2003, a review of state records by the Midwest Center for Investigative Reporting found.

And since Gov. Bruce Rauner took office in January 2015, the agency has seen further cuts. The agency lost 190 full-time employees between July 2014 and December 2017. In addition, despite legislative approval to hire up to 768 employees, the agency still remains significantly understaffed.

The Illinois Pollution Control Board handled 18 administrative citation cases in 2017, after handling 54 cases in 2014. Read more about the downturn here.

“There has been such a slow burn of cuts and cuts and cuts,” said Jen Walling, executive director of the Illinois Environmental Council, an association of 80 environmental groups across Illinois. “But what this administration is doing is worse because they have the capacity to do more.”

Illinois EPA Director Alec Messina said, over the years, the agency saw a significant increase in unfilled positions because as employees left, the agency did not attempt to hire replacements. The cuts have been across the agency and have largely been through attrition, such as retirements or staff leaving for other jobs. 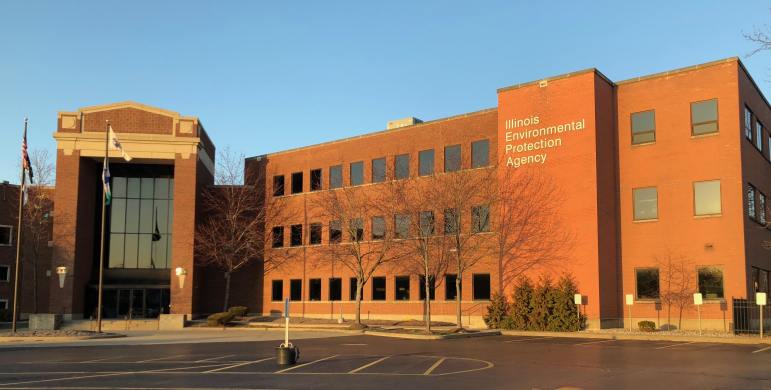 The Illinois Environmental Protection Agency headquarters in Springfield on April 7.

Messina said that despite the downturn, the agency is still meeting its legislative mission.

“We are continuing to meet our core missions,” Messina said. “People are working really hard to do that. We need to not burn our folks out. We need to do everything we can to bring in new blood and replenish those personnel resources.”

The agency, which has not received any general revenue fund money from the state government since 2011, is largely dependent on federal funding and permit fees for revenue.

Although the agency does not receive state general revenue funds, it was still limited in its spending during the two years the state did not have budget. For example, in 2016 the agency spent only $221 million of the $365 million in revenues it received, and the agency stopped its household waste and tire collection events.

The reductions under Rauner and Messina mirror what is happening at the federal level in the Trump administration and in other Midwest states, including Iowa, Indiana and Wisconsin. 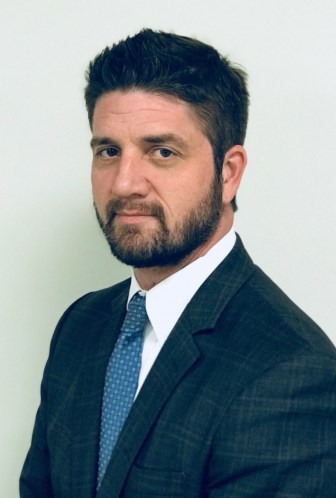 Alec Messina, the director of the Illinois Environmental Protection Agency.

Messina was general counsel for the agency between 2005 and 2009 under Blagojevich. After leaving his state position, he served as executive director for the Illinois Environmental Regulatory Group, a trade organization for coal companies, power companies and industries subject to pollution regulations. He was appointed director of the Illinois EPA in 2016, where he makes a $133,000 a year.

During an interview earlier this year, Messina was optimistic that the agency would be able to fill its empty positions.

“These actions taken by the General Assembly and Comptroller’s Office are definitely impediments to increasing headcount at the agency,” Messina said.

Messina said the agency’s staffing issues started because the agency did not post jobs as employees left.

“Hiring is critical, and you have to be really aggressive in posting these jobs,” Messina said.

“Just because we post 106 jobs, more than double the number of postings in each of the last six years, doesn't mean we get 106 new people off the street,” Messina said.

Messina said many of the jobs are filled through interagency transfers. He also said the agency has struggled to find qualified applicants.

Environmental advocates argue the lack of staffing continues to hurt the state.

“Without an active enforcement regime and the employees that actually carry that out, it’s a very big state and we can’t expect that fewer people can simply absorb the workload,” said Carol Hays, executive director of Prairie Rivers Network, a nonprofit organization that advocates for clean water in Illinois. 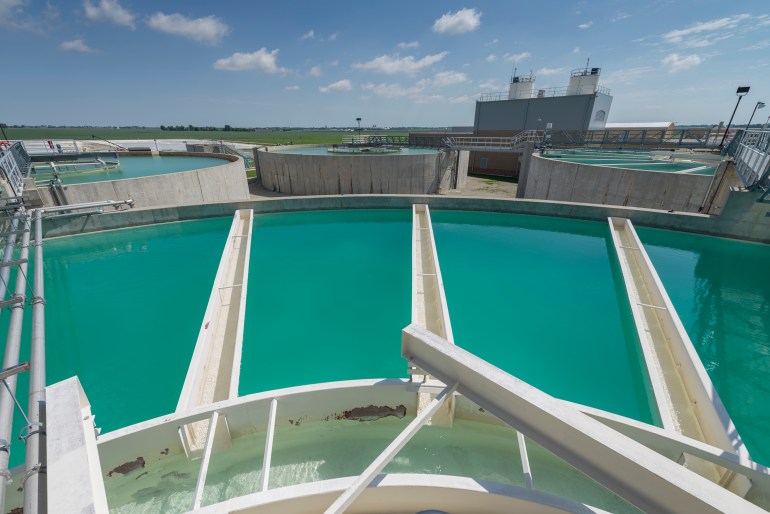 A settlement basin in the first treatment steps at the Illinois American water plant west of Champaign on June 3, 2014.

As employment levels declined under Rauner, the agency’s air, land and water bureaus also decreased their enforcement, according to a comparison of agency records between Fiscal Year 2014 – the last full year before Rauner took office – and Fiscal Year 2017. The state’s fiscal year runs from July 1 to June 30 of the following year.

Messina said the downturn in inspections can be traced to fewer pollution sources. He said that past administrations have focused on smaller cases, such as littering, so one reason for fewer violations may be because the state is letting local governments handle smaller cases. 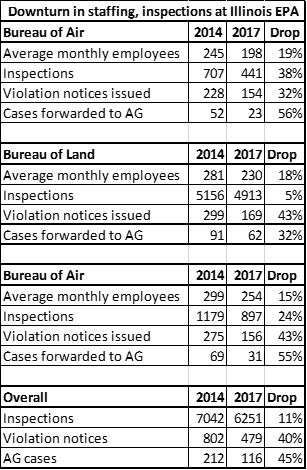 “There is an important place for enforcement in what we do,” Messina said. “It’s an exceptionally important tool to utilize, but there are other factors beyond that as well.”

But environmental groups stressed the agency must do more.

“These aspects and functions of the government weren’t just made up. They were put there to address a public problem,” Hays said. “(The downturn) could seriously harm people. Not protecting drinking water could kill people if we don’t ensure these laws are enforced.”

Brian Urbaszewski, director of environmental health at the Respiratory Health Association of Metropolitan Chicago, said the state government seems to be following the same blueprint as the federal government under Trump in reducing staff and enforcement.