His name was Devon McClyde and he was 16 years old when he was caught in the crossfire of an argument while playing basketball one evening in a local park in Danville on June 8, 2016.

He died three days later – the victim of another gun crime in Central Illinois.

At least 100 people died from gunfire over the past three years and at least 500 were wounded, according to data obtained from a sample of police departments of eight small cities in downstate Illinois.

The Midwest Center for Investigative Reporting is a partner of the Illinois Newsroom, a regional journalism collaboration focused on expanding coverage of education, state politics, health, and the environment. See more in this series illinoisnewsroom.org

The data, obtained through Freedom of Information Act requests by the Midwest Center for Investigative Reporting, is kept in different formats and is often incomplete. Yet the data show that gun violence has been a chronic issue over the past decade and that some cities have seen recent surges in shootings.

The statistics also reveal that increasing efforts to stop the gun violence may have not been as effective as communities and police have hoped.

Several areas have launched formal programs to decrease gun violence – such as the Don’t Shoot Initiative in Peoria and the CU Fresh Start program in Champaign and Urbana.

A Danville group, Three Kings of Peace, is working with Moms Demand Action for Gun Sense in America and other groups to host weekly peace rallies and block parties in neighborhoods this summer.

The data included at least 1,500 reports of shootings between 2015 and 2017. The analysis by the Midwest Center excluded suicides and self-inflicted wounds.

The cities included Bloomington, Carbondale, Champaign, Danville, Decatur, Peoria, Springfield and Urbana. The cities range in population from 26,000 to 115,000 persons.

The Midwest Center compared data from local police to state and federal reports and media reports. Reporting on shootings can be inconsistent and in one instance, the Center found that a high profile killing in Peoria was not included in that city’s data.

Gun shootings leave a legacy of mourning and fear

Devon McClyde liked music and basketball and pulling pranks on his family.

“Oh, he was just so bright and lovely. Oh, my God. I miss my baby. I miss him,” said his grandmother, Debra Matchem, 54.

June will mark the two-year anniversary of his death. Since then, Matchem said, it’s been a “dark cloud” for the whole family.

“His brother and sister, they trying to deal with it. The mother is dealing with it. I can’t explain it, it’s just so sad,” Matchem said. “I think it’s more sad of how … he died. That’s what’s really bothering us is how he died.”

Dallaz A. Camareno of Danville was arrested for the murder in July 2016 and later sentenced to 20 years in November 2017 after pleading guilty to second-degree murder in what was determined to be a gang-related shooting. 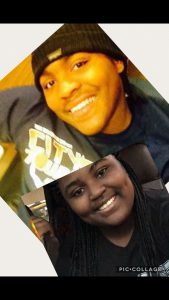 Andre Booker was a popular student and played on the basketball and football teams. He was 19 years old when he died.

He was one of three persons killed that in May 2017 in Springfield, ending a month of gun violence in which 14 people were wounded.

“It’s predominantly young kids, and it’s, ‘I can do better than you,’ and it’s to prove a point. And it’s cool to carry a gun a shoot someone, but young lives are being taken by the dozens. It’s sad, you know, ruining their lives,” said Nadine Williams, a former crime analyst for the Springfield Police Department who retired in 2015 after more than three decades.

In a 2017 report, the Heartland Alliance, an anti-poverty organization, found that people living in poverty were more likely to be victims of violence, whether they lived in urban, suburban or rural areas.

The agency found that Vermilion County, where Danville is located, had the third highest violent crime rate in Illinois.

“Illinois has not recovered from the recession as well as other areas,” said Katie Buitrago, director of research at the Heartland Alliance.

While news reports may quote officials who attribute the violence to persons who moved from Chicago to downstate cities, Buitrago said it is more likely that people who live in downstate cities likely became less wealthy.

“I think it’s probably an oversimplification to blame it on Chicago. The people living there [in central Illinois] already are getting poorer,” Buitrago said.

Larry Thomason, director of public safety for the City of Danville, said that gun violence in Danville is not random but instead usually involves gangs or drugs.

“We could suppose all day long on how some of that’s generated, how it’s changed from 10 years ago to today,” Thomason said. “But there’s a lot of efforts going on out there to put an end to it.”

Danville native Mary Catherine Roberson is part of a local group to help curb the violence.

This summer, she and a group of other gun violence activists have scheduled marches and block parties to raise awareness about gun violence and to encourage people to report issues as they see them.

Roberson, a close family friend of Matchem’s, became more active after the death of Mr. McClyde.

Of the 10 homicides in Danville in 2017, eight were related to gun violence, Roberson said.

In Champaign, 30-year-old Ericka Cox-Bailey was shot to death two years ago while walking home from Dollar General in Champaign after a trip to buy snacks on a summer Sunday evening.

The victim of a stray bullet, Ms. Cox-Bailey was killed just outside of a popular bowling alley.

“You’re walking through the neighborhood in the city you live in, and you’re murdered,” Fourman said. “That was the shooting I was sure was going to change how our community reacted, and sadly, nothing has changed.”

Fourman, who lives just down the street from where Ms. Cox-Bailey was killed, said she does not let her children walk outside by themselves for fear that they may get shot.

“It’s become a part of our neighborhood,” Fourman said.

She said that her children are exposed to gun violence by living in north Champaign.

Fourman said that while much of the attention has been on murders and shootings where someone is injured, she is also concerned about the frequency of shootings where no one is hit.

She compared the frequency of the shootings to the “wild, wild west” and said the persons responsible should not have guns.

Fourman said she is concerned with the community and police response and the police unwillingness to say there are gangs in Champaign.

“We aren’t honest about how there are gangs in Champaign,” she said. “I’m concerned that law enforcement doesn’t use the word gangs. They don’t want to address it how it is.”

But Champaign Police Chief Anthony Cobb said gun violence around gangs and cliques still occurs occasionally, but it was more prevalent in the past than it is today.

“We saw a lot more group-on-group dynamics where a person is a victim today and an offender tomorrow,” Cobb said. “We’re not seeing much of that now, but we do see it on occasion.”

Gun violence in Champaign today is more isolated and related to drugs and domestic problems, he said.

A coalition of 11 people from local police forces including Champaign, Urbana, the University of Illinois and Champaign County are working to prevent gun violence, Cobb said.

And while a proactive police force is one solution, a cooperative community is another, he said.

Cobb also said finding witnesses to gun crimes can be challenging because of fears of retaliation, Cobb said.

“To say nothing is basically, you’re condoning, you’re saying that, ‘It’s OK and I’m going to allow this in my community,’” Cobb said. “And today, you weren’t shot, your loved one wasn’t shot, but tomorrow doesn’t promise that.”

Cobb said the gun violence is a tough issue across the country.

The Midwest Center for Investigative Reporting is a partner of the Illinois Newsroom, a regional journalism collaboration focused on expanding coverage of education, state politics, health, and the environment. The collaborative includes Illinois Public Media in Urbana, NPR Illinois in Springfield, WSIU in Carbondale, WVIK in the Quad Cities, Tri States Public Radio in Macomb, and Harvest Public Media. Funding comes from the stations and grants from the Corporation for Public Broadcasting (CPB) and McCormick Foundation.