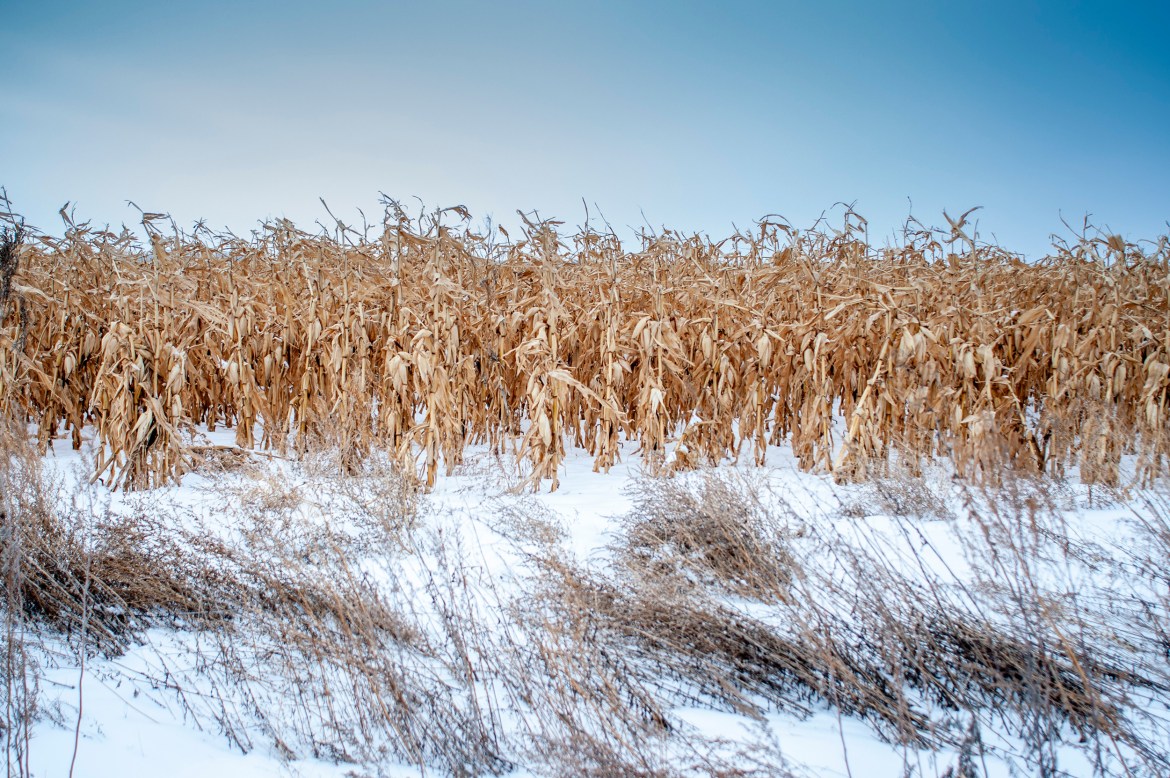 ROLLETTE, ND - Driving through Rollette County, North Dakota in mid-January, there are places the corn can be seen popping out of snow drifts piling up on the edges of the field. Squares of brown, unharvested fields dot the otherwise white, flat landscape. That corn wasn’t supposed to be there at all. It should have been harvested by October.

“USDA calls that ‘on-farm storage’,” Ryan Pederson said, laughing as he drove past his unharvested corn.

The term “on-farm storage” is typically designated for crops already harvested, stored in a bin and ready to be sold by the farmer.

Pederson raises wheat, canola, soybeans, barley, corn on his north central North Dakota farm. He was able to harvest everything except his corn and a few acres of soybeans last fall.

“It wasn’t quite mature when it froze,” he said, pulling an ear from a stalk to check on the crop’s condition. “Some stalks are starting to break down, but most of the cobs are still here.”

A rainy September was followed by a blizzard on October 10 that dumped 1-3 feet of snow on much of North Dakota. The snow kept farmers out of the fields for nearly a month last fall. A brief window opened up in early November, when Pederson said he was able to finish the wheat, soybeans and canola harvest.

In all, USDA-NASS estimates that 51 percent of the state’s corn acres were still unharvested as of January 27, 2020.

North Dakota fared worse than many other states. Nationwide, 8 percent of corn was still in the fields in December, according to survey data from the United States Department of Agriculture’s National Agricultural Statistics Service. That’s compared to an average of 1.4 percent unharvested each year since 2016.

All that standing crop has lead to challenges for the farmer, both in finishing out 2019 and preparing for spring planting.

For the Farmer, planting challenges loom

As farmers plan for the 2020 growing season, those fields of unharvested corn, soybeans, wheat, canola, sugar beets and sunflowers in North Dakota and across the upper Midwest sit in limbo. Harvesting them requires melted snow, but frozen ground to prevent combines from getting stuck in the mud.

For many crops, harvest is no longer an option and clearing the fields will take valuable time this spring, either by burning or plowing under the remnants of last year’s crop. That adds substantial work to a narrow window this spring, already filled with ground preparation and nutrient application that didn’t get done in the fall. And then there’s planting.

Corn and soybeans can better withstand the wind and snow, so most farmers still plan to harvest the crops, but anticipate smaller yields due to moisture causing mold, animals eating part of the crop, or the wind knocking down stands.

“There’s going to be loss,” said Pederson. “Nobody knows for sure how much they’re going to get out.”

Meanwhile USDA had the challenge of summarizing the year in crop production, even when 2019’s crops are still not harvested.

Each December, the USDA surveys more than 80,000 farmers, to get an accurate read of how many crops were harvested across the country. That data is compiled in the annual crop production report, as well as the quarterly grain stocks report.

Most years, unharvested acres are an insignificant part of that survey. Lance Honig, crops branch chief at USDA NASS, said the agency has protocols in place for handling crops that didn’t make it out of the field.

“There’s always some crops left unharvested at the end of a year. Just not so many as we saw this year,” he said.

The last time such a large percent of crops were left unharvested was the 2009 growing season.

In years when volatile weather keeps a large percent of acres from being harvested, the agency asks farmers to also share the acres they intend to harvest in their numbers, as well as how much corn and soybeans they still intend to harvest and expected yield. The agency does not ask how many unharvested acres a farmer has.

Those farmer-submitted harvest intentions are included in the total crop production and grain stocks reports, labelled as “on-farm storage.”

“If it’s still going to be harvested, then it needs to be accounted for in the supply numbers,” he said. “We don’t want it to get ignored, or fall through the cracks, because it’s not where it normally is.”

Honig said he realizes the system is imprecise, but given that this isn’t a problem faced each year, it’s the best way to handle an extraordinary situation.

“There’s always some risk involved in forecasting or estimating before something’s absolutely final. But there’s also enormous value in getting markers along the way,” he said.

Honig said, at a national level, counting the standing fields as farm storage is the most accurate way to keep track of what’s out there. The alternative would be to accurately report the harvested acres in December, only to see a jump in grain stocks in the March report when everything was finally harvested.

But it's not just farmers in states with massive unharvested acres that are concerned with USDA's approach to calculating grain stocks this year.

Brian Duncan, who raises corn, soybeans and hogs in northwest Illinois and serves as the vice president of the state's Farm Bureau Association, said it feels like the USDA's methods favor everyone except the farmer.

"Why not factor in weather, and reality? This crop is shorter than NASS said. I’m driving the state now, and there’s no piles on the ground. There’s always piles. There’s no corn on the ground," said Duncan. "Why is the bias against the producer?"

Honig said it's not a bias for or against any party, but just the standard procedure for the agency. He said he realizes it may not feel accurate to the farmer still staring at a crop in January.

“This is absolutely a huge deal for producers who are impacted, but nationwide, the impact on the totals isn’t as great as one might think,” said Honig. “If none of these acres ended up getting harvested, that would be a fairly big impact. But we know that won’t be the case.”

Pederson said he wonders how the higher grain stock number will impact grain prices at the local elevator where large swaths of acres still wait to be harvested.

David Holzwarth, grain marketer for Rugby Farmers Elevator in Rugby, North Dakota, said most of his farmers locked in forward contracts when the prices were higher, so are insulated from the effects of the downturn in prices.

“If you’re short-sighted, your maybe hurting, but if you’re thinking long-term, you’re doing ok,” he said. “You need to protect yourself from these market swings.”

But Duncan said, for farmers using the Chicago Board of Trade to hedge against risk, those fluctuations in local cash prices are important.

"If you’ve got hedges, basis becomes everything," he said.

Pederson said he understands where the USDA is coming from, but doesn’t like the uncertainty.

“If I was in charge of the USDA, I don’t know how I would do it,” said Pederson. “We just don’t know what’s out there.”

Honig said the agency has a plan to send out a resurvey, once farmers who noted unharvested acres finally get their crops out.

“Sometime later this spring, when the’ve been able to finish harvest, and we’re going to find out what actually happened with those acres.”