Eads is the fire chief at the Neosho Fire Department in southwest Missouri. In February, it received $780,643 from a Staffing for Adequate Fire and Emergency Response (SAFER) grant. SAFER is one of many grant programs under the Federal Emergency Management Agency’s (FEMA) grant programs directorate -- part of the Department of Homeland Security -- that provides funds to local agencies.

The grant provided money to pay for six firefighters, two engineers and a training officer. When a devastating tornado hit Joplin in May, Eads said members of his department went to help St. John's Mercy Hospital with triage. They also assisted with search and rescue efforts in the area.

As the 10th anniversary of the 9/11 attacks nears, are we safer from a terrorist attack? In a series of articles, funded by grants from the St. Louis Press Club and the Ethics and Excellence in Journalism Foundation, the St. Louis Beacon and the Midwest Center for Investigative Reporting will look at how money from the Department of Homeland Security was spent in Missouri.

Without the SAFER grant, Eads said, he never could have sent as many people to deal with the tornado's aftermath.

"We sent 16 people that first night up there," Eads said. "Had we not had the SAFER grant personnel already here, we probably would have been able to send about four to five."

Missouri fire departments have received $5.48 million from SAFER grants in 2011. About $1.38 million has gone for recruitment efforts mainly at volunteer fire departments, while $4.09 million went to rehire fire fighters laid off due to local budgetary concerns.

In addition to Neosho's situation, St. Louis received a $3.2 million grant that kept 30 firefighters from losing their jobs. A $102,000 grant also went to a fire protection district in Camdenton to rehire one employee for two years.

That $5.48 million is a small slice of the $372 million allocated this year for hiring or recruiting firefighters, according to a Federal Emergency Management Agency document. And while federal assistance to firefighters generally enjoys bipartisan support in Congress, some groups and lawmakers have questioned whether federal funds should be used to plug local budgetary holes.

"SAFER grants provide financial assistance to help fire departments increase their cadre of frontline firefighters or to rehire firefighters that have been laid off," states a FEMA document laying out the elements of the program. "The goal is to assist local fire departments with staffing and deployment capabilities so they may respond to emergencies whenever they occur, assuring their communities have adequate protection from fire and fire-related hazards."

In 2009, the program was expanded to to allow for re-hiring laid off firefighters. For fiscal 2010, a FEMA document said that "we will distinguish between grants to hire new firefighters and grants to rehire laid-off firefighters, giving applications for the rehiring of firefighters who have been laid off the highest priority over any other hiring request."

That's exactly what happened in St. Louis where the fire department received $3.2 million over two years to forestall layoffs of 30 firefighters. Chris Molitor, president of the St. Louis branch of the International Association of Fire Fighters, said the money was "instrumental to helping us in keeping our staff levels where they need to be and allowed us to properly protect" St. Louis."

"Obviously with the economic conditions of most municipalities, St. Louis found itself qualifying for the need of the SAFER grant," Molitor said.

Some results of having the grant money, Molitor said, were that all of the city's firetrucks are fully staffed. He also said the money turned back threats of closing engine houses. 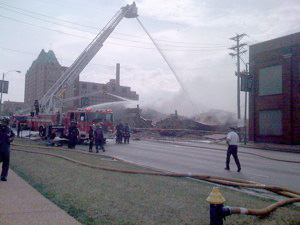 A fire at the Pevely Dairy Complex in the Tiffany neighborhood destroyed a warehouse on March 22, 2009. The Staffing for Adequate Fire and Emergency Response (SAFER) federal grants have allowed fire departments across Missouri to recruit, hire and retain firefighters. Brent Jones/St. Louis Beacon

"[That] would leave a hole in the city, if you would, where the protection wouldn't be there like it is now," Molitor said. "Anytime you have emergency equipment responding from farther away, obviously the emergency can intensify in minutes. Fires grow exponentially within minutes, so it's extremely important to have as many firefighters on the scene as soon as possible."

A similar situation occurred at the Mid-County Fire Protection District in Camdenton, where a $102,000 SAFER grant went to rehire an employee who served as a daytime inspector and firefighter. That department encompasses 10 paid staffers and about 42 volunteer firefighters.

"Because we are a predominantly volunteer fire department, during the week daytime fires is when our volunteers are working," Fire Chief Scott Frandsen said. "So that allows us to put another person available in the daytime to respond to calls."

"We're about ready to go into fireworks season," he said earlier this summer. "We've got a lot of fireworks in our community. So we've got all these fireworks tents popping up all over the fire district. All those have to be inspected."

The Columbia Daily Tribune reported in May that the Boone County Fire Protection District, which is comprised of both volunteer firefighters and paid staffers, was planning on using $350,000 of the grant toward marketing and advertising and $71,250 toward the recruitment of a coordinator director.

Scott Olsen, fire chief for the Boone County Fire Protection District, said part of the grant will be used to create a "targeted marketing campaign" aimed at bringing in more firefighters. He also said money will go toward part of the salary for a recruitment and retention coordinator.

The fire district is home to Missouri Task Force 1, an urban search and rescue entity that has responded to the 9/11 terrorist attacks, Hurricane Katrina and the Joplin tornado.

"Really the focus of the grant is here at home in the Boone County Fire District," said Olsen after being asked if the grant would assist in the entity's work in responding to major events and disasters around the country.

"We have 14 fire stations and at any one time we might struggle with one station or another with having enough volunteers to fill the roster at a level that we'd like. It's more going to focus on community groups here, neighborhood associations, various social groups [and] high schools.

"Can there be a side effect of this marketing campaign in impacting Missouri Task Force 1 or those kinds of things? Certainly that is a possibility," Olsen said.

Frandsen's Camdenton fire district -- which received a $138,978 SAFER grant this year for "recruitment" -- said that money will be spent in part to send volunteers to summer and winter fire schools. It will also go to hire a part-time recruitment and retention employee. 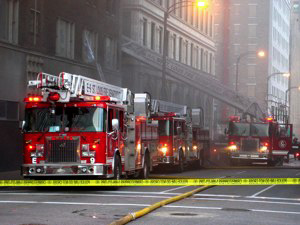 The Alverne Building at 11th and Locust in Downtown burns May 24, 2010. The St. Louis Fire Department received federal grants of $3.2 million over two years to keep 30 firefighters in their jobs. Brent Jones/St. Louis Beacon

"This person will be responsible for developing the marketing campaign, track the progress of the volunteers, go out to the community and market the fire department to try and get us more volunteers," said Frandsen, adding that this employee could go to job fairs around the area.

He added the grant also allows the district to develop a marketing campaign -- which could include fliers and a DVD -- to recruit new members.

"We're seeing a significant decline in volunteers," Frandsen said, adding that firefighters and EMTs have to meet certification requirements. "All these things you have to keep up, plus the call load. And the (requirements) just go on and on."

Grants for fire departments were recently at the center of a debate over how to fund the Department of Homeland Security.

Initially, the SAFER program and a corresponding program to provide equipment and training to firefighters were cut when the House started debate on the Homeland Security bill. An amendment ultimately passed to increase funding for the program from $350 million to $670 million.

The 333-87 vote was overwhelming -- bringing together Democrats such as U.S. Rep. Russ Carnahan, D-St. Louis, and conservative Republicans like U.S. Rep. Ron Paul, R-Tex. The House also agreed, by 264-157, to continue allowing SAFER grants to go toward rehiring firefighters.

Sam Drzymala, a spokesman for Carnahan, said the lawmaker assisted in steering the grant money toward St. Louis. The local IAFF recently provided him with a ceremonial ax thanking him for his help.

"The United States has a vested interest in seeing communities safe," Drzymala said. "And we've got to make sure that happens in times of economic trouble."

U.S. Rep. Billy Long, R-Springfield, and U.S. Rep. Vicky Hartzler, R-Harrisonville, were the only members of the Missouri delegation to vote against both amendments. Every Republican except U.S. Rep. Jo Ann Emerson, R-Cape Girardeau, voted against extending the grant's provision to be used for rehiring.

In a statement, Long said, the "future of any program depends on our financial situation."

"Until we can stop borrowing money to pay our obligations, each program has to be examined," Long said. "All levels of government should budget for rainy days. The problem with federal support programs is that they create a cycle of financial dependency and over-spending. I was sent to Washington to cut spending. Each program has to be examined in the face of such a dire financial situation."

Steve Walsh, a spokeswoman for Hartzler, said, "While the congresswoman supports firefighters and the good work they do, the funding of fire departments should be a local issue."

"Especially during tough budget times," Walsh said. "The congresswoman believes that in times of fiscal restraint, difficult decisions have to be made."

Several conservative think tanks have opined against the SAFER program. Jena McNeill of the Heritage Foundation wrote that Congress "is more intent on preserving pet projects than on exercising fiscal responsibility -- attempting to look good on spending while really just playing the same old money games."

Tad DeHaven, a fellow for the Libertarian-leaning CATO Institute, took the criticism a step further.

"Why in the world am I paying federal taxes in Pennsylvania to a bureaucracy in Washington so that it can turn around and send a check (minus a cut for the bureaucracy) back to my local fire department as well as to thousands of other fire departments across the country?" asked DeHaven in a recent editorial.

"Ever since 9/11, the (responsibility) of every fire department in this country has increased dramatically," Molitor said. "Because now, not only are we responsible for putting out fires and responding to emergency medical calls and things like that, we are also responsible for all the anti-terrorism work that needs to be done. [That] includes air monitoring, bomb threats....There are a lot of homeland security issues that the fire departments take care of."

When asked the same question, Neosho's Eads said the program is an example of taxpayer dollars going back to the taxpayers.

"The federal government is supposed to be here to take care of the local governments -- state, all the way down," Eads said. "And to me, that's our money be put back to use in our areas."

While the SAFER grants may help the three fire departments fend off layoffs for the next two years, they may not be a long-term solution.

"I'll be honest, if our financial conditions are still the same way, I will be looking at" reapplying for the grant, Eads said.

Frandsen said, "Obviously when you have a 220-square mile fire district, two people on duty 24 hours a day to take the load off the volunteers really isn't sufficient."

Molitor said coming up with funds to support the previously laid off firefighters after the grant runs out "is a concern." But he said it also provides time to work with interested parties to come up with a plan.

"And certainly, we're willing and able to sit down and try to do just that," Molitor said.