In July, a 55-year-old man working for Premier Cooperative in Sidney, Ill., suffocated and died after becoming trapped in a grain bin filled with corn.

Roy Lee McCarty was known for his love of fishing, his family and his two dogs. He worked for 11 years at the commercial grain elevator that in 2011 was fined more than $30,000 by the Occupational Safety and Health Administration. The fine was for seven serious violations from an incident when a worker had to be rescued from a grain bin at a different Premier Cooperative facility in Jamaica, Ill.

McCarty’s death marked the first grain-bin fatality for Illinois this year, but with expected large crop yields coming, more farmers may be at risk.

An NPR investigation earlier this year, “Buried in Grain,” found that nearly 180 people have been killed in grain-related entrapments at federally-regulated sites across 34 states since 1984.

“With the agricultural season still in full swing, the U.S. Department of Agriculture is predicting a record-breaking corn crop in 2013,” said Tom Bielema, the area director for the Peoria, Ill., Occupational Safety and Health Administration office, in a statement. “In the heartland, that is great news for the farming industry – but it also underlines the unique hazards facing workers in the grain handling industry, especially in the storage of grain.”

There have been more than 900 grain-bin entrapments throughout the country since 1964, according to data compiled by Purdue University’s Agricultural Safety and Health Program.

More than half of those incidents were fatal. 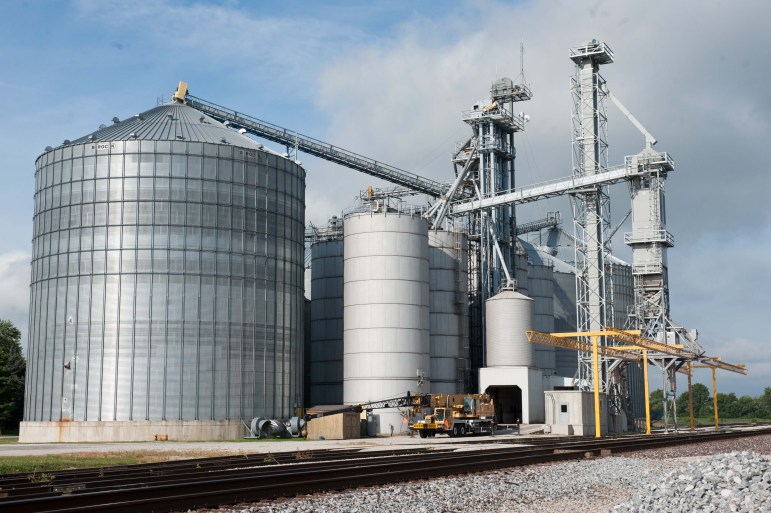 “It only takes two to four seconds before the grain is above your knees, on average,” said Bob Aherin, an agricultural safety expert for the University of Illinois’ extension program. “And at that point, you’re trapped and the pressure is so great that you can’t get yourself out.”

Suffocation from entrapment is the leading cause of death in grain storage bins, but it isn’t the only risk. Wet grain can ferment in bins and release noxious gases. Very fine and dry grain can ignite and explode. Grain dust can cause serious problems for workers if it gets inhaled into their lungs.

While many safety standards exist to prevent grain-bin incidents, there is one recommendation that – in theory – prevents all fatalities.

Many safety organizations, including the Occupational Safety and Health Administration and agricultural extension programs alike, tell farmers to stay out of grain bins entirely.

“We recommend that they don’t go into the bins at all, if at all possible,” said Aherin.

Officials in the grain handling industry say that always staying out of grain bins isn’t realistic.

Jess McCluer is the Director of Safety and Regulatory Affairs for The National Grain and Feed Association, a non-profit trade association that represents and provides services for grain, feed and related commercial businesses. The association represents more than 1,000 companies, which handle a combined 70 percent of all U.S. grain. 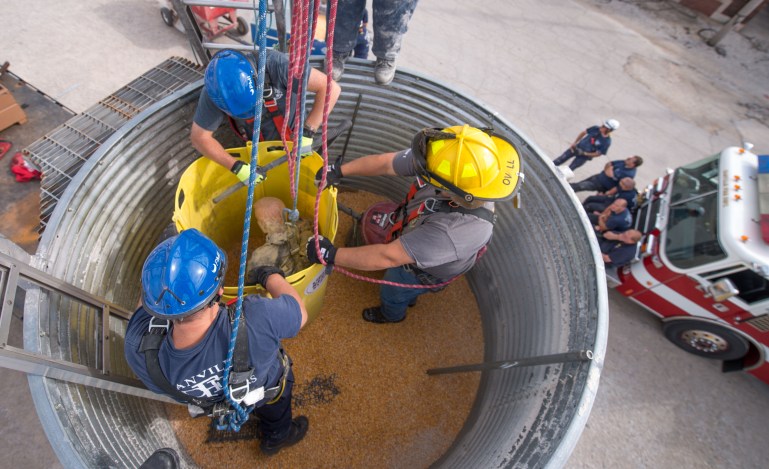 McCluer said going into grain bins is simply part of the job. “Moving grain” and “walking the grain” are, at times, necessary risks.

“People go into the grain bins when they are trying to move the grain out,” said McCluer.  “For example, if it has a sump pit, gravity causes the grain to flow down to a certain level, but then you’ll need a sweep auger to go around the bin to move the grain closer to the center part where it will drain it.”

Very dry grain funneling out of bins creates quicksand-like hazards for grain-handlers working inside them.

Workers also need to enter bins to break up grain when it solidifies from excess moisture.

Similar to wet sand, grain sticks together when it’s moist, a phenomenon known as “bridging.” When grain bridges, it sometimes sticks to a bin’s side in clumps. Workers then need to go into the bin and poke or prod the bridged grain off. Workers are occasionally injured or killed in “avalanche” instances when bridged grain on the side of bins collapses on top of them.

Walking the grain can be like walking on thin ice if the top layer has bridged from moisture.

“You can be walking on top of grain, and if it’s bridged, then that means there could be a hole under that top part of grain,” said McCluer. “If that breaks, then you could fall through.”

“As a human, every time you go in and something bad doesn’t happen – even though it’s a dangerous situation – it kind of reinforces your behavior to do it again,” - Bob Aherin, safety expert

Grain bin safety records show that almost all Illinois grain-bin-related incidents have involved men. Some have been as old as 81, and others have barely been teenagers.

In 1992, a 45-year-old man in Carroll County was working with an auger used to mix grain when it collapsed and fell on him. Four others from Carroll have died when working with grain bins since 1986. One was a 14-year-old boy.

In 1998, a 38-year-old man from McLean County was electrocuted when coming into contact with a live wire in a grain bin.

In 2011, an 81-year old man from Clay County was cleaning out his grain bin from above when he fell inside and died on impact with the concrete base.

“People become very complacent and they don’t place value on the risk,” Aherin said. “We have to get them to understand the real risk, and to be aggressive in dealing with the risk.”

Because the investigation is ongoing, Roger Miller – the chief executive officer and general manager of Premier Cooperative – said he could not comment on McCarty’s death. However, he said grain bin safety should be the number one priory for all farmers and commercial grain elevators.

“We have a zero entry policy here at Premier Cooperative,” said Miller. “And in today’s world, zero entry in grain bins is a necessity.”

He said Premier Cooperative has had the zero entry policy for about three years.

In 2011, Miller said the violations and fines were issued because somebody entered a grain bin and didn’t follow company safety policy.

Structural challenges are one reason why farmers risk their lives by entering grain bins without effective lifelines to save them, Aherin said.

Many grain handlers tie off their harnesses to ladders, said Aherin. Ladders don’t have the structural integrity of a specially-designed anchor point, and tying off to a point on the side of a bin allows for too much slack compared to an anchor point positioned directly overhead.

“You don’t want too much slack because if you fall through, all that rope is going to do is help people find a body,” said Aherin. 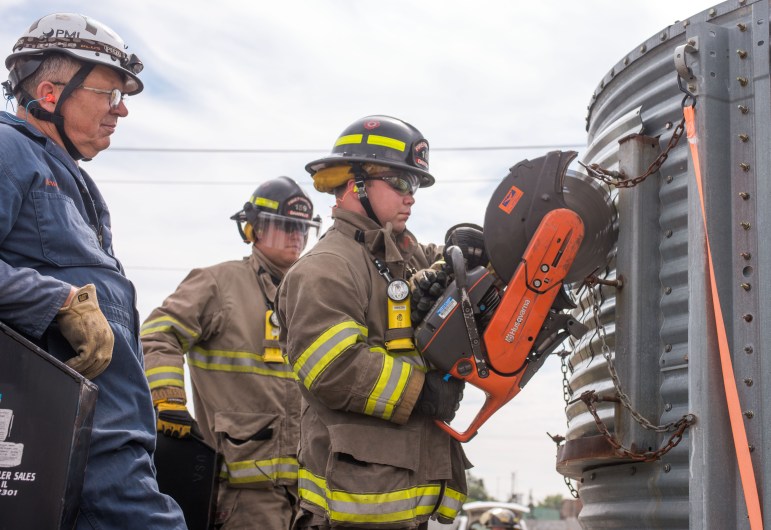 Many lifeline systems don’t meet these performance requirements. Likewise, many grain bins don’t come equipped with working anchor points. Grain bin manufactures have only recently started installing anchor points on bins. That means newer bins may be safe, but thousands of older bins still in use are unequipped.

“A lot of grain bin manufacturers have been putting proper anchor points on their bins in the last three or four years, but that’s only going to affect new bins,” said Aherin. “We need to look at ways to retrofit these old bins and put a system into old bins.”

When somebody enters a grain bin without a lifeline and safely comes out alive, the idea that grain bins aren’t dangerous is reinforced. When a 49-year-old man died in an Illinois grain bin incident in 2010, OSHA reported he was described as having entered a grain bin “a million times.”

“As a human, every time you go in and something bad doesn’t happen – even though it’s a dangerous situation – it kind of reinforces your behavior to do it again,” said Aherin. “Businesses sometimes get complacent because they’ve had workers in bins and nothing has happened and they don’t think it’s necessarily that big of a deal.”

The American Society of Agricultural and Biological Engineers began working on improved grain-bin design standards in November of 2012. The improved standard will “direct bin manufacturers to include interior anchorage points to which safety equipment can be attached,” said a news release issued by the society.

Even though accidents continue to happen, McCluer said the grain-handling industry is currently safe enough.

"There are requirements that facilities have to follow,” said McCluer. “As far as addressing engulfment and entrapment, I think it’s addressed in the current standard.”