Chavarria grew up on farms in Coahuila, a Mexican state situated on the United States-Mexico border.  In 1990, when he was 16, Chavarria came to the States to make a better living by working in agriculture and as a mechanic in Texas’ Rio Grande Valley.

Under Republican migrant labor policies championed by Ronald Reagan and George H.W. Bush, Chavarria obtained citizenship, which allowed him to travel more easily for work, as the need for farmworkers shrunk due to advances in machinery.

Chavarria, 41, now has more than 25 years of experience working on farms and factories all over the Mid- and Southwestern U.S. He’s also become somewhat conversational in English.

Chavarria has worked meat packing jobs in Minnesota, at a chocolate factory in Kansas, and at fruit and vegetable farms in Texas and Missouri. 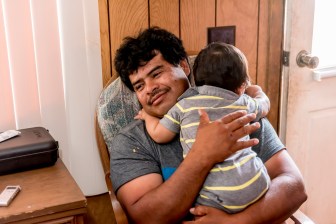 Agustin Chavarria, 41, and his 11 month old baby, Jose, at their temporary home on an orchard just outside of Lexington, Missouri, on June 22, 2016.

Chavarria said his hardest job was detasseling corn in Iowa and Nebraska. Traditionally, detasselers remove the top most part of a corn plant by hand and drop it to the ground as a means of pollination control.

Sometimes considered a rite of passage for Midwestern teens, detasseling is becoming increasingly more common among migrant farm laborers who complete the task with “cutters,” or machines that cut off the top part of the plant.

“You feel the heat the most and you often get blisters on your feet often up to the size of a quarter,” Chavarria said.

During most of the year, Chavarria said that he lives and works in Lexington, Missouri. Roughly half of the year, he is joined by his long-time girlfriend, Francisca Lopez, 42, and their blended family of six children. They also have a home in the Rio Grande Valley in Texas, but the better paying jobs with better conditions draw Chavarria to Missouri most of the year.

The family works on peaches from April through August. It then pivots to apples through Thanksgiving.

Lopez works in the fruit-packing department of the orchards while Chavarria works out in the field. It’s not an unusual arrangement for husband-wife migrant worker duos.

They return to Texas for the holidays, they said.

“You feel the heat the most and you often get blisters on your feet often up to the size of a quarter.” - Agustin Chavarria

Similar to the stories of other migrant farmworkers, Chavarria said that he’s been shorted wages and forced to live and work in unpleasant conditions at times. Overall, though, he said his professional experiences have been fair and rewarding. He has built a network of reliable employers, he said.

The place that reminds him most of home and that has some of the best jobs? Lexington’s orchards.

Chavarria said the tranquility of farm life in rural mid-Missouri reminds him of the farms in the city of Torreón, in Coahuila, Mexico, where he grew up. He said his father, now 71, still works out under the sun in the fields.

Chavarria said he prefers Lexington to the Rio Grande Valley in Texas. The Show Me State seems more like the home he and his compatriots have been working toward, he said. 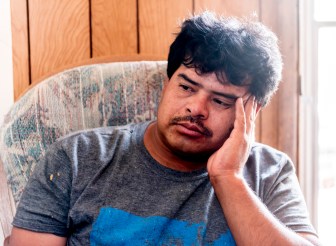 Agustin Chavarria, 41, at his temporary home on an orchard just outside of Lexington, Missouri, on June 22, 2016.

“People running the fields here are nice, and they wave to you. Back home, I don’t recall many of the people who would say hi or wave as you drive around,” Chavarria said, adding that in Texas he sometimes experienced colorism, discrimination based on his darker skin tone, even among other Latinos.

Here in Missouri, he said, his white boss speaks Spanish “very well,” which Chavarria said benefits their communication and ability to work together harmoniously. He and Lopez said they feel valued by the orchard owners, and Lopez said Chavarria “loves” his boss.

Chavarria and Lopez’s assimilation into American culture can even be seen in the couple’s wardrobe. Chavarria often sports a #KCProud shirt celebrating the Kansas City Royals. Lopez sometimes wears a pink John Deere shirt, even though she said that she stays far away from the tractors and the fields if she can.

“I don’t work outside because I couldn’t stand the sun,” Lopez joked in Spanish. “He’s the one who likes working outside.”

After spending the winter in Texas, usually working in factories or sometimes re-selling some goods he picked up at garage sales or flea markets in the Midwest, Chavarria said he usually moves up to the Lexington area on his own every April to start helping out at an orchard before the harvest. Lopez remains with the children in Texas while they finish school and joins in late May through the end of the year.

The couple has six boys. The eldest two are Lopez’s from a previous relationship and are 22 and 19 years old. The four youngest, who range in age from 1 to 12, are from her relationship with Chavarria.

Back in Texas, Lopez works in a home for the elderly when not with Chavarria during harvest season. She used to be a hairstylist back in Tamaulipas, where she met Chavarria in the town square when he was visiting his mother who had moved there. 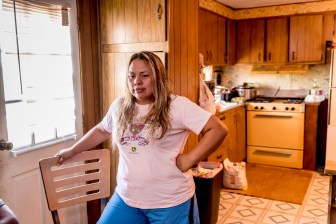 Francisca Lopez, 42, at her temporary home on an orchard just outside of Lexington, Missouri, on June 22, 2016.

Chavarria said the wages and need for workers in the Midwest often results in better treatment and pay from farm owners than in Texas where the market is more saturated with laborers.

But in parts of the Midwest, he said pay may be anywhere between $450 to as much as $600 a week for the same type and amount of work, which translates to as much as $10 an hour.

In Texas, he said he would also likely have to pay rent.  Chavarria said the orchards in Missouri often provide free housing, which saves him about $400 per month.

With a family of seven in Missouri and unpredictable weather patterns impacting the number of jobs available, money can get tight though.

Their living expenses are limited to food, gas, insurance and utility bills and about $100 to $200 a month for their trailer.

They live in a single-wide trailer on orchard property with three bedrooms and two bathrooms.

The trailer inside is hued in various earth tones, primarily tans and browns recalling the 1970s-era love of such colors in American interior design, from the wood panel walls to tan carpet and beige linoleum in the kitchen with maize-colored stove. The kitchen table only can seat about two or three comfortably.

Stepping outside, there aren’t the sounds of traffic like in the Texas’ Rio Grande Valley, nor the crime or temptations of urban life he’s seen. Only fields and fields of serene green.

“It’s nice and quiet out here and safe for the kids to play,” Chavarria said.