Fragmented oversight on food safety in the United States has allowed foodborne illness to persist as an expensive and all-too-frequent health concern, a new government report has found.

The report — produced by the Government Accountability Office and released in January — determined that the several federal agencies charged with ensuring food safety often have redundant or confusing jurisdictions. Improvements in stopping foodborne illnesses have largely stalled as a result — and the number of reported multi-state outbreaks is on the rise. 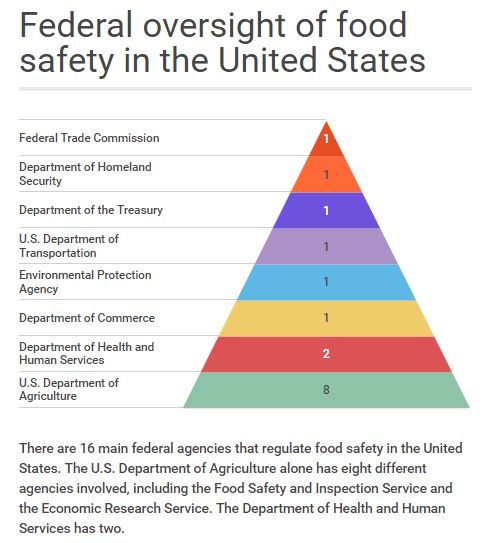 Annually, one in six Americans are likely to get sick from something they ate, according to the Centers for Disease Control and Prevention. Combined, those illnesses total more than $15.5 billion in expenses.

That list includes agencies in the departments of agriculture, commerce, health and human services, homeland security and transportation, among others. The complex framework means that it can be difficult to determine the agency with lawful regulatory authority, the GAO found.

To resolve this fragmentation — which has been criticized in federal reports several times in the past four decades — the Government Accountability Office recommended that the Executive Office of the President meet with key stakeholders and develop a cohesive national food-safety strategy to better guide oversight.

Food safety has been highlighted as one of the accountability office’s high-risk areas since 2007.

Food safety: Who does what?
Create your own infographics