About a third of campaign spending went to Democrat candidates while more than $12 million were given to Republican candidates. 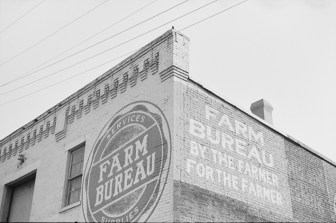 Nearly $1 out of every $3 dollars spent came from political committees associated with crop production and processing, such as American Crystal Sugar and the National Corn Growers Association.

One of the larger contributors was the American Farm Bureau.

The American Farm Bureau has branded itself as “The voice of agriculture.” Influencing elected officials and public policy is a core mission for the group.

The group contributed more than $400,000 this year, according to OpenSecrets.org.

The national organization, which is headquartered out of Washington, D.C., started in 1919 with representatives from 30 states. Today the organization has more than 6 million members throughout the U.S. and Puerto Rico. The first state federation was started in 1915 in Missouri.

With a sizeable membership and advocacy as a mission, Farm Bureau has become a political heavy hitter. Financial contributions, endorsements, and access to members make Farm Bureau an attractive, and often sought after political proponent.

The total dollars spent by the Farm Bureau Federations across the U.S. is hard to calculate since each state makes its own contributions.  Endorsements are much easier to follow since media give them a fair amount of play. Generally, contributions and endorsements come from the state federations’ political action committees. Most of the state websites boast success rates, with over 90 percent of Farm Bureau backed candidates getting elected.

OpenSecrets.org has American Farm Bureau Federation listed in the top 15 organizations supporting agribusiness through political contributions. This data was for the 2011-2012 election cycle and did not include the recent general election.

Traditionally, regardless of state, Farm Bureaus tend to be more conservative and endorse far more Republicans than Democrats.

This trend can be seen with a review of the “Friend of Farm Bureau Award” list. This recognition is awarded to members of Congress who are Farm Bureau friendly. The vast majority are Republican.

The Missouri Farm Bureau Federation endorsed an all Republican slate this year, which holds with its traditionally conservative platform.  This included an endorsement for the Republican U.S. Senate candidate, Todd Akin, who became nationally known in August for comments related to rape and reproduction. While many organizations pulled endorsements of Akin, or at the very least distanced themselves from him, the Missouri Farm Bureau stood beside the conservative candidate.

Breaking from the traditional right-leaning ties this year, the Michigan Farm Bureau backed Democrat incumbent, Debbie Stabenow for the U.S. Senate race. The Michigan federation had gone with Republicans in the two prior Senate races. Stabenow is the chair of the Senate Agriculture committee and has been a steadfast advocate for Michigan farmers in recent years. She was the only Democrat endorsed at the federal level by the Michigan Farm Bureau.

Likewise in Minnesota, there was a break in tradition this year when that federation came out with an endorsement of Democrat Amy Klobuchar for U.S. Senate. She too had a track record of advocating for agriculture producers in her state. Both Klobuchar and Stabenow won re-election.

In the swing state of Ohio, its Farm Bureau stayed neutral in the Presidential and U.S. Senate races. A news release on its website said the Ohio Farm Bureau Federation helped candidates in these races “engage with Ohio’s farm families.” The Ohio Farm Bureau was active in statewide legislative races though. All 18 of the state senate candidates, and 89 of 94 state house candidates were elected, according to the website.