This year brought one of the worst droughts in U.S. history with a severe impact to millions of acres of farmland.

Yet the effect of weather and drought changes in the Midwest reach beyond the region to the rest of the world because of its many global agribusinesses. 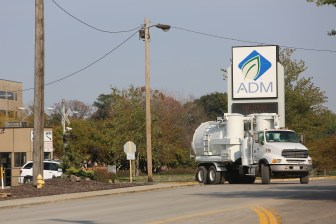 A truck pulls out of one entrance to the Archer Daniels Midland Company in Decatur, Ill.

Farmland in Illinois, Iowa, Kansas, Minnesota and Nebraska are among the nine states in the country that sell 50 percent of the U.S. agriculture products while netting nearly $100 billion in total produce sales, according to U.S. Census data.

The top commodity is grain and oilseeds and the sale of grains and oilseeds such as corn, wheat and soybeans has nearly doubled since 2002 and account for over 20 percent of all agriculture products sold.

Iowa ranks second with over $10 billion in grain and oilseed sales in 2007.

Six of the states under extreme or exceptional drought conditions are home to some of the world’s largest agribusiness companies.

More than 5,000 companies and farms in the Midwest bring in more than $1 million in annual revenue each across nine states – Illinois, Indiana, Iowa, Kansas, Michigan, Minnesota, Missouri, Nebraska and Wisconsin, according to an analysis of company profiles obtained from LexisNexis.

More than 20 companies total more $1 billion in sales annual, of which 16 are headquartered across these states.

Overall, these companies turn produce into energy, food, feed and seed and collectively net nearly $300 billion in annual sales, according to an analysis of company profiles obtained from LexisNexis.

Among these companies are some of the largest in the world. A review of 5,100 records shows:

The recent drought and global economic conditions have negatively impacted production and sales for many of the largest corporations.

Expenses, such as fuel and livestock feed, have risen and sales have declined.

As a result, several have reduced workforce and expenses.

Cargill cut its labor for by 1,700 people and expenses by $400 million.  ADM too is reducing its workforce and energy costs to save $150 million a year, according to company annual reports.

The challenges that face agribusiness nationwide may be compounded for America’s small farmers.

Farms with annual sales less than $250,000 generate nearly 60 percent of all farm-related income and employ 40 percent of the U.S. hired farm labor force.

Recovery efforts continue as federal officials coordinate millions of dollars in aid, programs and information to assist those affected such as buying $170 million in meat and fish produce “to help relieve pressure on American livestock producers and bring the nation's meat supply in line with demand,” as well as provide millions of dollars in loans and grants.

In October, the USDA’s National Resources Conservation service made more than $27 million available in aid to farmers and ranchers to make conservation improvements, according to a news release.

The U.S. Drought Monitor indicates that more than 60 percent of the nation’s hay, cattle, corn and soybean acreage is an area experiencing drought conditions

During the week ending August 26, USDA's National Agricultural Statistics Service reported that 52 percent of U.S. corn and 38 percent of the soybeans were rated in very poor to poor condition, while rangeland and pastures rated very poor to poor remained at 59 percent for the fourth consecutive week.

"This tremendous response reflects the severity of this year's drought conditions,” said USDA Secretary Tom Vilsack."The level of producer participation is also a testament to the hard work of USDA and other federal agencies to help farmers and ranchers weather one of the worst droughts in decades."