Farmer Doug Wilson has been buying crop insurance since 1980.

“You carry home insurance, hoping your house doesn’t burn down. We carry crop insurance, hoping our crops don’t burn down,” Wilson said on a sweltering day in mid-August as he walked among the healthy 8-foot corn stalks in one his fields in central Illinois. “But last year, they burned down — kind of literally.”

Wilson and other crop farmers in Livingston County, Illinois, took a direct hit from last year’s record drought. But although it was his worst harvest ever, Wilson did not suffer a long-lasting financial impact. Or much of a short-term impact, for that matter.

Listen to this story on Harvest Public Media

That’s largely because here in Livingston County, government-subsidized crop insurance paid big. In fact, the county led the nation with $154 million in crop insurance indemnities. (Overall, more than $17 billion was paid to U.S. farmers.) That payout far exceeds the $124 million that went to county No. 2 — Hutchinson County in South Dakota.

“The heat baked Livingston County right at the time of pollination and a high percentage of farmers carried crop insurance there,” said Bruce Sherrick, a professor of agricultural and applied finance at University of Illinois.

Local experts also noted the high price of corn, the high acreage of corn planted in this north-central Illinois county, and more affordable coverage as reasons the payout was so high. Farmers here have been planting about twice as much corn as soybeans in recent year, according to the Illinois Soybean Association.

Many people here credit that $154 million payout with saving the local economy in this county of nearly 40,000 people. The jobless rate in July was at 9 percent, just a couple of months after the state of Illinois closed a women’s prison as part of budget cuts.

“We had individuals, without the crop insurance, they probably would have had a third of a normal year’s gross income last year, relative to them have a relatively normal year because of insurance,” said Gary Bressner, a banker in the county seat of Pontiac. “We’re going to be better off for quite some time because of last year’s safety net.”

Stan Blunier had about half of his 1,300 acres planted in corn.  The crop insurance payments allowed him to continue on with his business plan. He purchased a new combine and also plans to buy a manure tank. 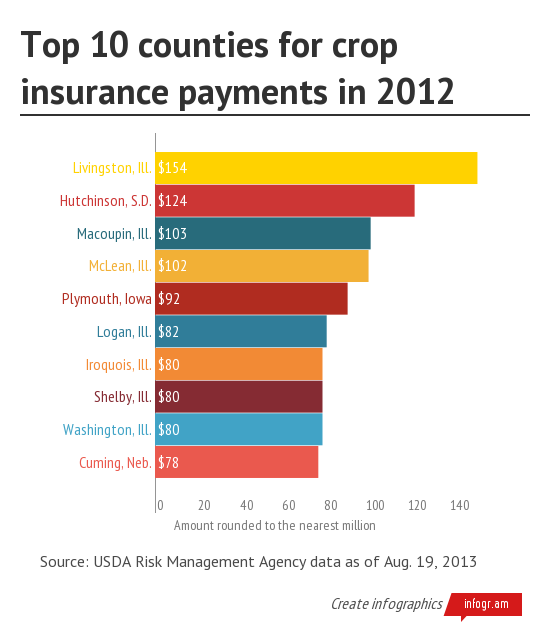 “I would have survived, but it would have really hurt — really, really hurt,” said Blunier, describing how the government-subsidized insurance made the difference for him.

Tim Kelly, co-owner of the John Deere dealership in Pontiac, said after the drought in 1988, it took a couple years for business to return to normal.

“If you can keep a farmer with money in his pocket he’s going to spend it,” Kelly said. “So if the farmer makes a dollar, then everybody that works for the farmer, the implement dealer, the grocer, everybody is benefitted by if a farmer can make money.”

As Congress again tries to negotiate a five-year farm bill this fall, farmers and others in rural America point to this impact as the reason why crop insurance exists.

And farmers do have some skin in the game.  In Livingston County, for example, farmers paid about $9 million for their share of the policy premiums. The government’s share, though, was close to $11 million. The government also was on the hook for a large portion of the payouts.

That large payout has drawn plenty of attention from government spending critics. Others fault how crop insurance influences farming decisions, including the Natural Resources Defense Council. In a recent report, the environmental group urged reforms to encourage farmers to use conservation methods.

“It charges farmers using a formula that doesn’t distinguish between farmers who are degrading their soil and farmers who are re-generating their soil to be resilient. It’s almost like a car insurance company that would charge more to a careful driver than to a reckless driver,” said report author Claire O’Connor.

Today’s subsidized policies are certainly popular with farmers. For the 2013 crop year, more than 270 million acres are covered across the U.S., continuing a steady annual increase since 2008.