Throughout the past decade, the United States government has given agriculture groups billions of dollars to pay for things like grocery-store displays for grapes in Mexico and tradeshows for hardwoods in Japan.

Since 2002, the money given to agriculture groups such as Cotton Council International and the U.S. Grains Council has totaled more than $2.4 billion.

That’s $2.4 billion for consumer research and product promotion in countries such as Japan, China, Mexico, The United Kingdom and Canada. In 2012 alone, the amount of money agriculture groups received for international marketing was more than $255 million.

Until recently, it appeared that those large investments in the FAS programs were paying off in big ways.

But a new government report has found that the programs lack strong evaluation methods. Consequently, it has questioned their impact.

The U.S. share of global agricultural exports has increased from 18 percent to 19 percent, according to independent studies by Global Insight, the analytics firm that the FAS contracted to evaluate its marketing programs. That small increase is equivalent to a $3.8 billion growth in trade.

The same studies found that the programs have also led to an $828 million increase to U.S. economic welfare – the term used to describe the well-being of society due to the production and consumption of goods and services – and that for every $1 spent on foreign market development, U.S. food and agricultural exports increased by $35.

“Each $1 billion in exports supports 8,000 to 9,000 jobs at home,” said Agriculture Secretary Tom Vilsack in a press release. “This study shows that USDA’s market development partnership with industry has had a significant positive impact on U.S. agriculture exports and increased returns to our farmers and ranchers by effectively and efficiently leveraging resources from the private and public sectors.”

Yet, according to the Government Accountability Office report, the General Insights studies used to gauge the programs’ impact are flawed and don’t consider important variables such as commodity prices, production volumes and export competition from other countries.

In other words, the studies are incomplete. As a result, “methodological limitations may affect the magnitude of the estimated benefits.”

The impressive results are inaccurate. 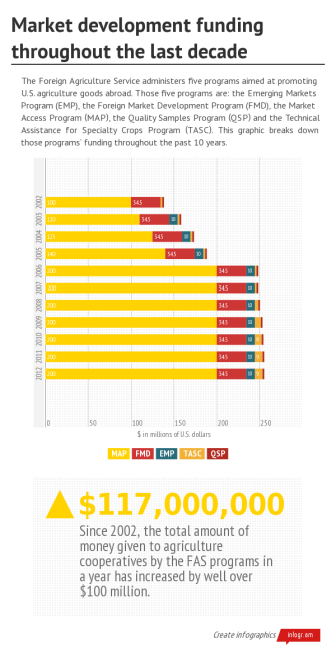 In addition to the flawed evaluations by the analytics contractor, each agricultural participant that receives funding is required to turn in an annual report to the FAS.

These annual reports are used to justify spending and to help FAS officials determine whether participants are efficiently using program funds.

In many cases, these reports, too, are incomplete.

The Government Accountability Office observed that nearly half of the participants receiving funds don’t identify the methodology used to assess progress. Participants claim that they have reached a certain goal, but fail to mention how they measured doing so.

For instance, an agriculture group might claim it has increased consumer awareness of its product by 25 percent, but then fail to mention the method used to calculate that number, such as a focus group of four people or survey of 40,000 people.

In this example, the performance measure would be the consumer awareness, the goal would be 25 percent, and the methodology would be the focus group or survey. 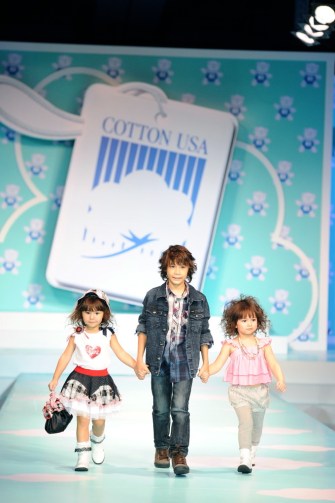 “Many of the participants’ annual country progress reports that we reviewed did not identify, as FAS guidelines require, the methodologies used to address results for each performance measure,”said the accountability office report. “These gaps limit FAS’s ability to determine the reliability of program results reported by participants and to accurately assess participants’ progress and success in achieving program objectives.”

FAS officials said they are aware of the evaluation problems and agree with the Government Accountability Office’s concerns.

“FAS is aware of the importance that every program participant’s performance measures include clear and strong methodologies,” said FAS Administrator Phil Karsting in a letter responding to the criticisms. “FAS will highlight that fact at the annual meeting of program participants scheduled to be held this November.”

Karsting also said the FAS will encourage vendors to include any omitted variables during proposals for the next economic impact study.

The Government Accountability Office looked into the FAS marketing programs in a performance audit that lasted from August 2012 to July 2013.

The five FAS programs are ultimately controlled by the U.S. Department of Agriculture. Specifically, they are the Emerging Markets Program, the Foreign Market Development Program, the Market Access Program, the Quality Samples Program and the Technical Assistance for Specialty Crops Program.

While the government report may have cast doubt on the impact of the FAS programs, it did not question their importance. It affirmed that the programs are necessary to increase U.S. exports and to avoid market failure.

“Without public-sector funding, the private sector would under invest in agricultural market development, negatively affecting the U.S. economy – an outcome known as market failure,” said the report.

Agriculture’s private sector has the main goal of maximizing profits and seeking immediate financial gains. Accordingly, such private-sector groups tend to develop short-term plans for international markets. These short-term plans do not take into account the intricate, long-term effects of foreign market developments.

For example, expenditures for high-value commodities such as certain fruits and spices have a lagged impact of seven years in a foreign market.

Expenditures for bulk commodities such as grains have a lagged impact of three years.

Cotton Council International received more money than any other agriculture group in 2012. It received more than $23 million in total, a little less than 10 percent of all money distributed.

Latner said part of the reason his organization received so much money is due to the cotton industry’s prominent role in the U.S. economy. He said the cotton industry provides jobs for nearly 200,000 producers, ginners, ware house workers, merchandizers, merchants, seed processors and manufacturers.

“These programs are critical for agriculture," said Latner. "Generally, because agricultural products are challenging to produce and face some of the most competitive international markets."

The U.S. Meat Export Federation received the second-most money. It received more than $21 million in total.

Other groups, such as the Potato Variety Management Institute, the Northwest Horticultural Council and Western Growers, received less than $30,000 each.

Out of the five FAS programs, the Market Access Program and the Foreign Market Development Program are easily the largest.

The Market Access Program has distributed exactly $200 million each year for the past seven years.

The Foreign Market Development Program has distributed $34.5 million each year for the past decade.

In 2012, the Emerging Markets Program, the Quality Samples Program and the Technical Assistance for Specialty Crops program distributed $10 million, $2 million and $9 million, respectively.

Since 2002, the total amount of funds distributed by the five programs has almost doubled, increasing by more than 84 percent, or more than $100 million a year.

FAS programs have “matching” requirements that ask participants to contribute a certain amount of their own, private money in order to receive public money.

The Market Access Program, for instance, requires participants to make private contributions that are worth at least 10 percent of the public funding they receive.

“The five programs have different requirements related to participants’ matching contributions, which FAS refers to as cost-sharing,” said the GAO report. “These requirements ensure that program funds are supplemental.”

In 2011, the Market Access Program distributed $200 million all together, and participants contributed a total of $394 million of their own money.

The FAS implemented the five market development programs to raise awareness and acceptance of U.S. agricultural products in overseas markets.

The participants that receive program funds from the FAS can use the money to perform a variety of activities. The money can be used to conduct market research, to promote products and to finance international trade shows. Funds are also used for reverse trade missions, where foreign buyers visit U.S. agriculture producers. 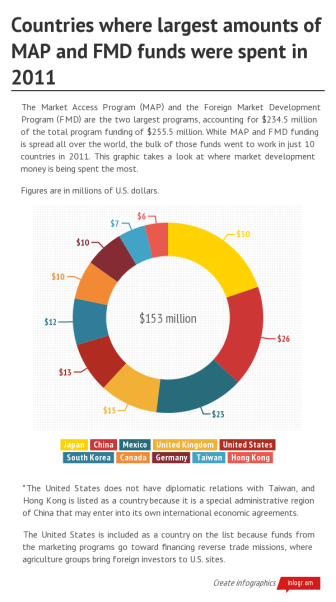 In the same year, the California Table Grape Commission used more than $270,000 to promote its generic products in Mexico, mainly through in-store grape displays. Funds were also used to “remove, resolve, or mitigate sanitary, phytosanitary, and related barriers that prohibit or threaten the export of U.S. specialty crops.”

According to the most recent expenditure data from the report, Japan was the most targeted country for market development. U.S. agriculture groups spent about $30 million promoting their products there.

China was the second-most popular location for market development, as U.S. agriculture groups spent about $26 million there.

Next in popularity were Mexico and the United Kingdom, which were targeted with $23 million and $15 million dollars respectively.