The two-day forum covered topics related to new producer assistance, food safety, and foreign and domestic markets. It also previewed the results of the 2012 Ag Census, a survey of America’s farms and food producers.

The Midwest Center for Investigative Reporting covered four of Friday’s sessions. Here are highlights from those sessions, reported by Sam Robinson.

Panel members from U.S. Public Health Service and Colorado Department of Public Health and Environment walked attendees through two recent foodborne illness outbreaks.  Both said it can be two to four weeks after a food item is consumed before it is confirmed the affected person is part of an outbreak. They also said it can take time even after an outbreak is identified before the source is found -- or illnesses prevented.

2. Food Safety Inspection Service officials said they could not find the right evidence to request a recall of Foster Farms chicken

While the Food Safety and Inspection Service was not able to make a direct link to Foster Farms chicken, Matt Wise -- team leader for the U.S. Public Health Service's outbreak prevention team -- said he feels the investigation was a success because of the positive outcomes. He said Foster Farms is altering its production methods and the industry is having a serious conversation about the issue as a result of the outbreak.

Feed prices in 2014 are expected to be well below 2013 levels. Corn is projected to be in the $4.20 to $4.80 per bushel range in 2014. Soybeans are projected at $425 to $465 per ton in 2014. This should help livestock and poultry producers expand operations. Market hogs, beef, sheep and lamb inventories were all down in 2013. Inventories of broilers, turkey and eggs are all expected to be up.

PEDv was first found in the United States in May 2013. Now, nine months later, it is in 25 states and has killed 4 million pigs. The Pork Checkoff program has spent more than $1 million and is expected to spend another $500,000 in the upcoming months on PEDv research, said Liz Wagstrom, chief veterinarian for the National Pork Producers Council. The virus can have a 100 percent mortality rate in piglets less than four weeks of age. This is creating a shortage of market hogs.

6. Size matters when it comes to carcass weight

Despite lower feed prices, beef producers are sending fewer cattle to slaughter. Those that are slaughtered must weigh enough to meet beef demand and make it profitable for producers, said John Nalivka, president of Sterling Marketing, Inc. Nalivka questioned Tyson’s decision to stop buying cattle that had been fed Beta Agonists – a food additive designed to help cattle gain weight. Beta Agonists can add 25 to 30 pounds to a carcass.

7. Mobile Slaughter units could be an area of growth in for small meat processors

It is getting increasingly difficult to own and operate a small meat processing facility, said Chris Young, outreach specialist with American Association of Meat Processors. Challenges for the industry include supply and cost of proteins, hiring and retaining employees, insurance costs and increasing regulations. Opportunities include the growing local food movement, as well as the need for local, custom and inspected slaughter facilities. Niche specialty-meat product markets also present opportunities for the industry. Young also said new mobile slaughter units could be a good way for people new to the industry to get a start without incurring a great deal of debt.

Eleven volunteer authors take turns inputting data and building the map that is released every Thursday. The groups has never failed to produce a Drought Monitor, despite sequesters and government shutdowns. The U.S. Drought Monitor was launched in May 1999 as an experiment, but was quickly adopted and became operational in August of that year. It has gone through many visual and software changes as it has evolved into the tool it is today. The positions are voluntary because there are no funds devoted to the process. 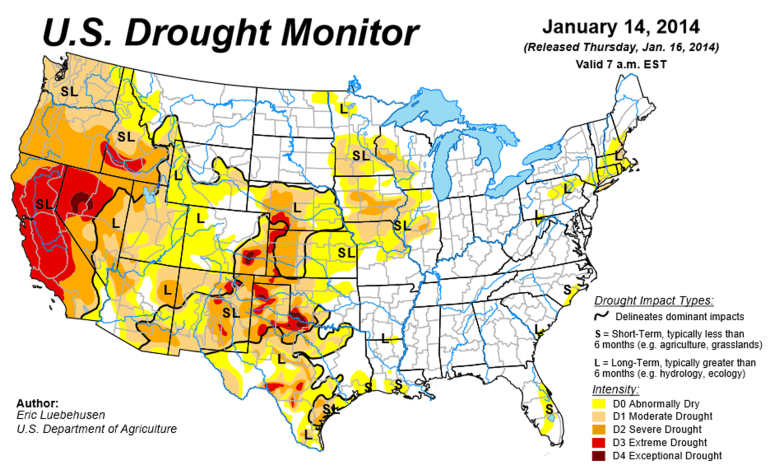 9.  California needs a “miracle” to prevent a water crisis

California is now listed in the D4 -- exceptional drought -- category of the Drought Monitor. The state is experiencing its driest year on record. Brad Rippey, a Department of Agriculture meteorologist, discussed the impacts of a drought on both California and the United States as a whole. California is the largest agriculture-producing state in the country. The field crops and livestock there are in desperate need of water. The lack of precipitation can be seen in the lack of snow pack in the region. The absence of snow pack means reservoirs and streams will not get replenished this spring.

10. Summer months could mean El Nino in the United States

Temperatures this spring should be average -- or enso-neutral, as Climate Predication Center meteorologist Anthony Artusa put it. This summer, the chances of warmer El Nino temperatures increases. Soil moisture levels are low in California, Arizona and in a region from Texas to Minnesota. Artusa said the Tennessee Valley could see increased levels of precipitation in March, April and May. He also said global temperatures look to be higher than average this year.