The continued outbreak of Salmonella from raw poultry has policymakers in Congress questioning whether current standards and inspection practices are enough to keep consumers safe.

The Centers for Disease Control and Prevention announced recently that since March 2013 about 480 people across 25 states have become sick from consuming chicken contaminated with an antibiotic-resistant strain of Heidelberg Salmonella.  Nearly two out of every five of those people had to be hospitalized.

On the same day as the CDC announcement, representatives from Foster Farms – based in California – issued a statement lauding the company’s commitment to food safety, while publicizing its revamped and comprehensive “multifaceted Salmonella control program.”

Investigations conducted by local, state and federal officials indicated that consumption of Foster Farms brand chicken is “the likely source” of the Salmonella outbreak.

No other chicken brands or companies were mentioned.

“[U.S. Department of Agriculture officials have affirmed that the interventions are working and confirmed, ‘Foster Farms is performing far better than the industry average,’” the company stated in a Monday, March 3 release. “Recent, in-market testing conducted by Foster Farms at the point of purchase further underscored that while Salmonella can be present in all brands of chicken, Foster Farms is among the safest choices available to consumers.”

"Recent, in-market testing conducted by Foster Farms at the point of purchase further underscored that while Salmonella can be present in all brands of chicken, Foster Farms is among the safest choices available to consumers."

Calls to Foster Farms for further comment were unreturned.

The number of sick consumers may be as many as 17,000 people based on CDC estimates, which state that the actual number of Salmonella cases could be 29 times higher than reported cases because people who only become mildly sick often do not report their cases.

People infected with Salmonella develop diarrhea, fever and abdominal cramps 12 to 72 hours after infection. Illness typically lasts anywhere from four to seven days. But in severe cases, infection may spread from the intestines to the blood stream, possibly resulting in death.

A different Salmonella outbreak linked to Foster Farms reportedly infected another 134 people across a dozen states in July.

“An outbreak of food-borne illness on the scale of that reported by the CDC in July is undoubtedly disconcerting to the American public,” wrote Rep. Rosa DeLauro (D-CT), who serves on the subcommittee responsible for overseeing the U.S. Food and Drug Administration and agriculture, in a statement. “A second outbreak emanating from the same company is wholly unacceptable.” 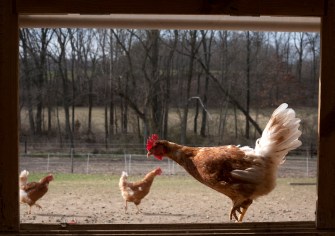 Shown above are chickens raised at a family farm in Campbell Hill, Ill. The Food Safety and Inspection Service sets the Salmonella standard for whole-chicken carcasses at 7.9 percent. There currently is no standard for raw chicken parts.

Rep. Louise Slaughter (D-NY), who has been a vocal food-safety proponent while serving in Congress by repeatedly attempting to pass legislation to limiting the use of antibiotics in livestock feed, has also been critical.

“The USDA’s toothless decisions endangers public health today, and encourages bad actors in the food industry to continue to break the law tomorrow,” said Slaughter in a statement. “The American people need a regulatory agency that works for them and not the food industry.”

A December report by Pew Charitable Trusts, a nonprofit organization that seeks to “improve public policy” and “inform the public,” echoed similar concerns.

It also noted that companies receive advance notice from the Food Safety and Inspection Service before samples from their facilities are tested for Salmonella, and that the agency cannot close a plant based only on results from salmonella testing.

Furthermore, the report found that the Food Safety and Inspection Service does not consider Salmonella as an adulterant in raw poultry, but rather as an indicator-organism used to determine whether a company is producing safe food overall.

And it also noted that the USDA agency also does not have the authority to enforce mandatory recalls, which help prevent the spread of known contaminated poultry.

The USDA’s Food Safety and Inspection Service is the public health regulatory agency responsible for inspecting meat, poultry and processed egg products. The agency’s jurisdiction on inspections starts at the slaughterhouse, where each day inspectors examine carcasses for disease and ensure that animals are slaughtered in a sanitary manner.

Salmonella and campylobacters are among the possible threats that inspectors monitor.

The current Salmonella outbreak is particularly potent because the strain is resistant to several commonly prescribed antibiotics.

Thirteen percent of the sick people linked to the chicken have developed blood infections as a result of their illness. Typically, only 5 percent of those with Salmonella infections develop blood infections.People who have become ill range are less than one year old to people to older than 93 years old. The median age is 18 years old.Three out of every four Salmonella cases linked to the Foster Farms outbreak occur in California, reported the CDC.

Other recent Salmonella outbreaks include one announced on Jan. 10, when the Food Safety and Inspection Service reported that Tyson Foods mechanically separated chicken was the source of a seven-person Salmonella outbreak at a Tennessee correctional facility.

Two of those individuals were hospitalized.

About 42,000 cases of salmonellosis are reported in the United States each year, according to the CDC. About 400 people die from severe cases.

But when dealing with raw food products, such as raw poultry, a certain level of Salmonella is inevitably expected, said Dan Engeljohn, assistant administrator for the Food Safety and Inspection Service Office of Field Operations.

“Salmonella is not an adulterant,” said Engeljohn. “It is expected to be there, although we’re taking steps to force there to be a reduction in the frequency of its presence.”

To minimize the risk of Salmonella, inspectors test one sample of food product for 51 consecutive days.

For broiler carcasses, or whole chickens processed for meat, the performance standard on Salmonella is 7.9 percent, meaning no more than 7.9 percent of the sampled chicken can test positive for Salmonella. To keep up with increased demand in food safety, the accepted rate has been on its way down in the last few decades.

In 1996, the performance standard was more than 20 percent.

But, as cited in the Pew report, there currently is no performance standard for chicken parts.

However, Engeljohn said that the Food Safety and Inspection Service had been discussing implementing a new standard to include chicken parts even before the Pew report came out, and that the new standard could possibly be enacted sometime within the fiscal year.

When Food Safety and Inspection Service officials determine there has been an outbreak, such as the current outbreak likely related to Foster Farms, they work with the CDC to establish a connection between the specific food product that has caused the illness and the specific establishment that made the food product.

To make that connection, officials analyze stools samples from people who have reported illness and determine what specific pathogen caused the illness. Then, they test the specific pathogen and match it up to see if its “fingerprints” are consistent with poultry products from establishments that they have tested.

“Often times, when we can make a match and we can identify the particular production lot from which that product came from,” said Engeljohn. “We can and we have the authority to have that product pulled out of the market place so that there are not additional illnesses associated with it.” 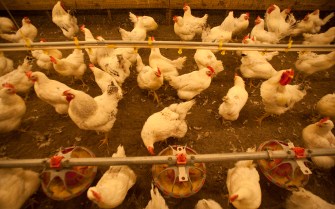 Chickens feeding in the breeding pen at the University of Illinois. Last year, the CDC announced that a different Salmonella outbreak from poultry was responsible for the illnesses of 134 people.

Officials from the agency need to find such a strong connection before pulling product because, if they do not, they become vulnerable to lawsuits, such as the infamous Supreme Beef Lawsuit from the 1990s.

After three failed Salmonella tests in eight months, the agency attempted to permanently remove its inspectors from a Supreme Beef Processors facility in Texas, an action equal to shutting the plant down entirely. In one test, inspectors found that almost half of the tested meat showed positive signs of Salmonella.

Supreme Beef took the USDA to court, claiming that the department did not have the authority to set limits on allowable levels of Salmonella in meat.

On the same day that the company filed the law suit, the court issued a temporary restraining order that prevented the government from removing inspectors. Eventually, courts ruled that USDA actions were not within the scope of their authority.

“We have to be sure that when we take an action, we can be defensible in the sense that we can have a positive outcome in that court action,” said Engeljohn.

Even though the Food Safety and Inspection Service did not pull Foster Farms product from grocery store shelves, it still forced the company to make changes by issuing a 72-hour notice of intended enforcement threatening that the agency would pull its inspectors from the company.

As a result of the notice, Engeljohn said Foster Farms has been installing new antimicrobial treatments to reduce the level of contamination on chicken parts.

“It’s a fairly significant outcome with what we were able to force upon them in the absence of doing a recall, which would have pulled product out of the market place even though we didn’t have the kind of evidence we needed to do that,” said Engeljohn. “We took what we believed to be the next substantive action, which was to force them to make a major investment in producing products with a significantly lower level of contamination.”