During the 2013 planting season, U.S. farmers had nearly two dozen different crop insurance policies to sort through when deciding how to best protect themselves from losses caused by bad weather, price drops and other perils.

This story is a collaboration with Harvest Public Media. See all stories in this series and check out our lobbying database.

The policies are part of the multi-billion dollar federal crop insurance program, administered by the U.S. Department of Agriculture’s Risk Management Agency.

“The choice between a price versus a revenue safety net had a big impact on what a producer’s risk management portfolio really looks like,” said Brad Lubben, a policy specialist for the extension program at the University of Nebraska.

The long-term Agricultural Act of 2014, approved in February after two years of discussion and deliberation, brought two new main insurance options to the table, as well.

With the two new policies, Lubben said the decision-making process farmers go through when deciding how to insure their crops will only grow even more complex come next planting season.

“Over the next maybe nine months, [producers] will have looked at how the programs rolled out, studied those decision tools, and been asked to make a decision about farm program participation,” Lubben said.

Congressional Budget Office estimates calculate that the various federal crop insurance programs will cost the government about $90 billion dollars throughout the next decade.

The government subsidizes about 60 cents of every $1 of premiums that farmers pay. The government also pays more than one billion dollars a year to insurance companies to service the policies.

A Midwest Center for Investigative Reporting analysis found that the most popular insurance policy sold last year was the revenue protection policy, which insures a farmer’s annual revenue by evaluating the combination of overall yields and market prices.

According to Mary Kay Thatcher, senior director of congressional relations with the American Farm Bureau Federation, revenue protection policies are popular – though more expensive – because they create revenue stabilization.

Instead of only protecting their crop yields, farmers can protect their earned revenue.

“Just like a person pays a premium for car insurance or house insurance or flood insurance, you would be able to recoup some of that loss back,” Thatcher said.

Farmers also frequently purchase “yield protection” policies, which insure an agriculture producer’s crops based on numbers derived from his or her individual farm.

Last year, those policies insured about 30 million acres of crops.

Farmers insured about 848 million acres of crops in total.

Under the Agricultural Act of 2014’s new “supplemental coverage option,” farmers will have the opportunity to effectively increase their coverage levels by combining two different types of insurance. 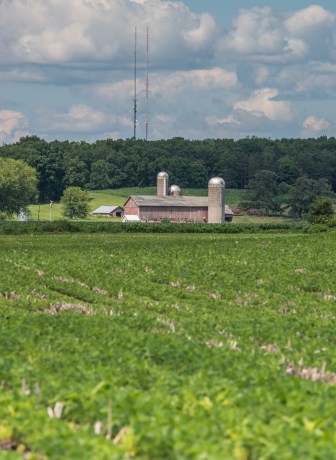 In general, farmers can buy insurance at coverage levels between 65 percent and 86 percent, though premium prices dramatically increase at higher coverage levels.

“The supplemental coverage option represents a new opportunity for producers to add a county-level coverage plan on top of their individual or farm-level plan,” Lubben said.

For example, farmers that bought a revenue protection policy at the lowest 65-percent coverage level for their individual farm can now add a secondary county-based policy to help boost coverage. County-based policies are less effective because they operate on regional averages, but they are also much cheaper than farm-based policies.

“It allows farmers to do more risk mitigation, but to do it at a more reasonable price,” Thatcher said. “Often times, you will get, when you try to get farmers to try to buy 80 and 85 coverage, but it is just so expensive that they can’t do it.”

Another policy called the “stacked income protection plan,” otherwise known as STAX, does the same thing for cotton, a crop that has been hit particularly hard by southwestern droughts in recent years.

But even with the new policies, Lubben said farmers have to still be mindful of the risks they are exposing themselves to.