In the coming decade, U.S. farmers should prepare for lower crop prices, costlier production expenses and a sudden end to the abnormally high net incomes of 2013 and 2014.

Taxpayers, in turn, should expect more of their dollars going to offset farm losses.

The predictions come from a U.S. Department of Agriculture report released earlier in February that takes a large-scale look at production, trade and farm income through 2024. The USDA’s Economic Research Service took the lead on the report, which is meant to act more as a compass than a crystal ball.

“The scenario presented in this report is not a USDA forecast about the future,” the report stated. “Instead, it is a conditional, long-run scenario about what would be expected to happen under a continuation of current farm legislation and other specific assumptions.”

Over the next two years, U.S. farmers are expected to lose about $12 billion a year in net income, falling from the $97.3 billion farmers netted in 2014. That decrease is largely because of lower prices on agriculture commodities, such as corn, soybeans and other crops.

Government payments to farmers to make up for those losses are expected to increase by at least $3 billion in 2016 and 2017. Typically, the USDA pays farmers a total of about $10 billion a year in direct payments. 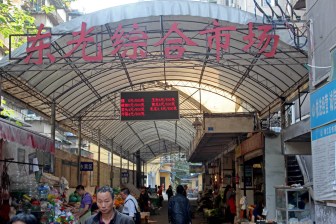 People walk through a local market in the city of Chengdu in southwest China.

According to the report: “Lower crop prices projected over the next several years lead to higher direct government payments to farmers in 2015 through 2017, mostly reflecting payments under the Agriculture Risk Coverage and Price Loss Coverage programs of the 2014 Farm Act.”

In 2017, farmers are estimated to plant about 11 million acres fewer than the average 257 million.

As developing countries grow, so will the livestock industry

The USDA foresees lower commodity prices and increased production expenses domestically, but it also projects U.S. agricultural exports will grow, as the global economy is on pace to expand by about 3 percent each year through 2024.

The demand for exports will likely remain strong in China and India, while other countries in Latin America, Africa, the Middle East and Asia are expected to see “robust growth.”

Meat exports may see the largest growth, as the global demand for poultry, beef and pork are all projected to increase annually.

U.S. beef and poultry exports are projected to increase by 34 percent and 17 percent by 2024.

Pork exports are projected to increase by about 19 percent.

Domestic consumption of meats is also expected to increase, mostly because of increased poultry consumption.

If those USDA projections hold true, that would likely mean gains for agribusiness superpower Cargill and other major meat producers. Cargill is the largest privately held corporation in the United States. Among its vast operations, the 150-year-old company specializes in agriculture services, as well as meat and poultry production.

According to a quarterly financial report, the company reported net earnings of $784 million in its fiscal 2015 second quarter, which ended Nov. 30. That total was an increase of 41 percent from $556 million during the same period the previous year.

“With first-rate performance in our agricultural, animal nutrition and meat businesses, Cargill posted strong results, outpacing recent quarters by a good margin,” said David MacLennan, Cargill’s president and chief executive officer, in the earnings report. “Just as last quarter’s focus was on getting ready for North America’s big harvest, the current quarter was all about execution. Our team did an excellent job serving farmer customers and fully utilizing our supply chains to meet domestic and export demand.”

Additionally, the 2014 report shows the company invested more than $3 billion in fiscal year 2014 – which runs from June 1 through May 31 – with about half that figure directed to new and expanded facilities.

In the long run, increased demand for meat may pay off for U.S. field crop farmers, as well.