China produces and consumes the largest amount of pork in the world, but an increase in demand for meat – particularly chicken – has prompted some U.S. companies to set up shop overseas.

Tyson Foods Inc. and Cargill, based in Arkansas and Minnesota respectively, have both established production plants in China.

“Meat production has been rising in China for three decades already,” said Fred Gale, a senior economist for the U.S. Department of Agriculture. “We anticipate that it’s going to continue growing as people change their standards and include more meat and poultry in their diets.” 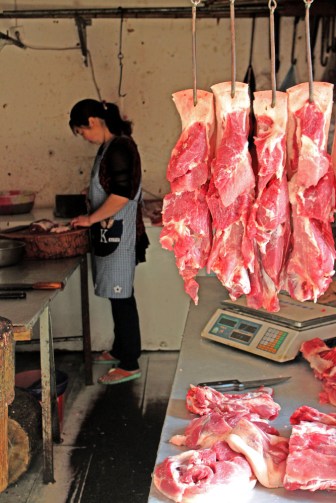 A woman stands at work in a market the city of Chengdu in southwest China. According to experts, meat production in China has been rising for parts of three decades.

China, traditionally a farming country, has been experiencing mass rural to urban migration since the late 1980s. The switch from small-scale agrarian production to more industrialized agriculture has correlated to a change in diet, as well.

“An urbanized consumer doesn’t produce their own food, so they’ll need to eat more processed foods,” said Peter Goldsmith, a food-marketing professor at the University of Illinois at Urbana-Champaign. “With urbanization and increasing incomes, Chinese consumers have shifted to meat. They ate a lot of pork, but now they are increasing consumption, particularly in the area of poultry.”

Goldsmith said that chicken is the newest and fastest growing protein in terms of mass consumption because of its low cost, transformability and availability.

The U.S. company Tyson Foods Inc. views China as one of the key markets for international growth. In fact, according to company findings, chain restaurants are opening at a rate of one restaurant every 18 hours in China.

Tyson currently has three poultry operations in the country.

However, Gary Mickleson, director of public relations at Tyson, said business has not been profitable yet.

The company plans on investing in a 100 percent, fully integrated poultry business in China. That would mean Tyson would have complete control of the chicken industry from production in the hatchery to processing in slaughter facilities. Currently, two out of the three Tyson plants in China are fully integrated, according to a company fact book.

While meat consumption is expanding in foreign markets such as China, it has reached its peak in the United States because of stagnant population and income growth. 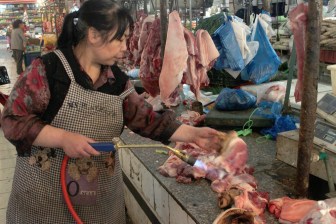 A woman uses a torch to scorch a piece of pork in the city of Chengu in southwest China.

“Consumers in China want to eat chicken, and you don’t have to do a whole lot of product development,” Goldsmith said. “You just open another KFC and boom, people are eating chicken.”

Goldsmith also said that Tyson is a supplier to other food industries, retailers and branded companies. For example, Tyson has a partnership with Kentucky Fried Chicken and serves as one of KFC’s suppliers. Tyson also partners with Chinese companies, too.

“Tyson brings in the technology, and the Chinese company brings in information about the market,” Goldsmith said. “When it’s branded, [the product] might not even say Tyson. It will say a Chinese name.”

The company has built roads, installed gas lines and established an electrical grid in its Anhui, China location, which provides poultry for food operations such as McDonalds and Yum! Brands.

Officials from the Cargill team in Asia declined to comment for this story. 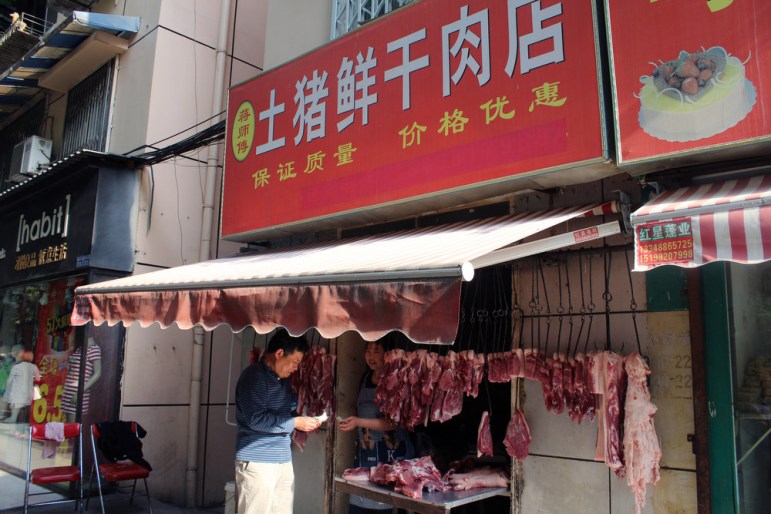 A person stands near a meat store at a market in the city of Chengdu in southwest China. In 2013, China accounted for 16 percent, or $14.4 million, of Tyson’s international chicken sales.

U.S. meat industry exports tens of millions of pounds of pork to China

Most of the meat market in China is still occupied by Chinese companies, Gale said. Nonetheless, food-safety concerns – such as last year’s outbreak of the avian bird flu – have lead businesses to look for larger companies that control their own farms. As a result, the concerns have presented an opportunity for U.S. companies.

“On the one hand, you’d like to support small holders, but small holders also means lots of middlemen, lots of handling of the product, which means you’re going to get a lot of exposure and opportunity for food safety breach,” Goldsmith said.

He also added that the United States is importing their model of integration and coordination, meaning contracting with larger-scale chicken producers and using feed that is traceable and tested. 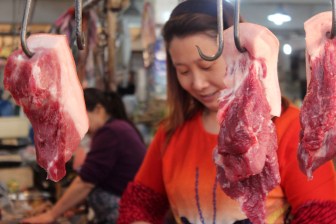 Meat consumption is on the rise in China, though pork has already been a dominant meat export to the country. According to the U.S. Department of Agriculture, companies based in the United States exported more than 70 million pounds of pork to China.

Joe Schuele is the director of communications for the U.S. Meat Export Federation, a trade association that represents companies exporting pork products. Schuele said China is a substantial buyer of non-muscle cuts such as pig ears, intestines and feet.

“China produces and consumes about half of the pork in the world,” Schuele said. “About 95 percent of pork is produced domestically, however, because of the magnitude of the industry in China. When they do have fluctuations in their supplies, that creates big opportunities for other suppliers.”

Last year, the United States exported $903 million in pork products to China, but Schuele said this year it would be less because of the decrease in pork consumption.

“There is a sluggish demand for pork, relatively speaking,” Schuele said.  “They are still consuming massive quantities of pork, but this is still such a massive industry that any time supply and demand is even slightly out of balance, you will see dramatic dips in prices.”

Schuele said that while exports to China have increased and while the poultry industry is currently experiencing a heyday, those trends will likely be cyclical.

He said that although China relies on a small degree of imports, it is still a big destination because of its massive market.

Under current food-safety regulations, the United States does not accept meat imports from China. Yet, Gale said some meat products are imported into the country in form of pet toys and pet food, which are regulated by the Food and Drug Administration.