With an F-1 or M-1 visa, nonimmigrants can come to the United States as full-time students.

Under a J-visa, individuals can enter the country as an “exchange visitor,” or a person who intends to participate in a certain teaching, lecturing, studying, research or consulting program.

And through the Diversity Immigrant Visa Program, immigrants from countries with low rates of immigration to the United States can enter the country through a random federal lottery process.

Brant Houston, Knight Chair in enterprise and investigative reporting at the University of Illinois at Urbana-Champaign, discussed the different visa programs during a session at the Midwest Center for Investigative Reporting’s workshop, “Covering the U.S. visa system in your own backyard.”

Houston focused largely on the diversity visa program, established through the Immigration Act of 1990. He explained how Champaign County, Ill., has experienced an influx of Congolese immigrants in recent years. 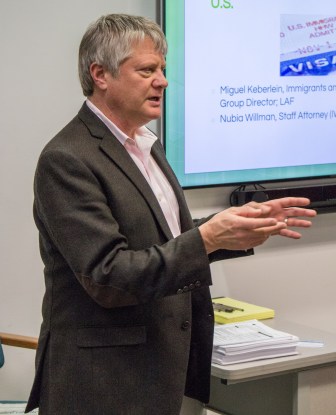 Brant Houston, Knight Chair in enterprise and investigative reporting at the University of Illinois at Urbana-Champaign, outlined the diversity visa program by pointing to an example in his own community.

Diversity visas provide up to 55,000 immigrant visas per year.

Many of the French-speaking Congolese immigrants, many from professional backgrounds, ended up working in toxic factory conditions at a Flex-n-gate operation. When employees spoke out, many received eviction notices.

After learning about the immigrant and subsequent job placement, Houston questioned the soundness of the program, which mirrored some of the abuses commonly reported on in the H1-A agricultural workers program.

He then searched through federal reports on the diversity visa program, he said.

His questions were brought up in the Government Accountability Office report: “State Could Enhance Visa Fraud Prevention by Strategically Using Resources and Training.”

“We reported that the Diversity Visa Program is particularly vulnerable to manipulation from an unscrupulous visa industry in some countries,” the 2012 report stated. “Because the program does not require a U.S.-based petitioner, it is particularly susceptible to fraud.”

The workshop was part of the McCormick Foundation’s Specialized Reporting Institute, administered through Poynter.

A map showing where diversity visa program immigrants originate. Click on the image to visit the source report.

The session took place on April 11 at Columbia College in Chicago. Those not at the workshop can follow some of the conversation and discussion by following the Twitter tag #InvestigateVisas.

Houston is also the author of four editions of the textbook “Computer-Assisted Reporting: A Practical Guide,” and co-author of the fourth and fifth editions of “The Investigative Reporter’s Handbook.”

He brought up two specific examples during his presentation.

In “Management Review of Visa and Passport Fraud Prevention Programs,” an inspector general report highlighted that “for terrorists, travel documents are as important as weapons,” underscoring the importance of an effective visa system.

In a 2012 inspector general memorandum, Deputy Inspector General Harold W. Geisel reported that “because of errors in the participant selection and notification process, the Bureau of Consular Affairs (CA) concluded that the FY 2012 diversity visa (DV) program had not been conducted in compliance with the laws and regulations that govern the program.”

He mentioned the Center for Immigration Studies as on example.

During his session, Houston listed other reporting tools for covering student visas and J-1 visas. Here are four of those tools and resources.

J-1 visa program map: allows reporters to see how many J-visas are active in a given state, although the most recent year with data is 2012. 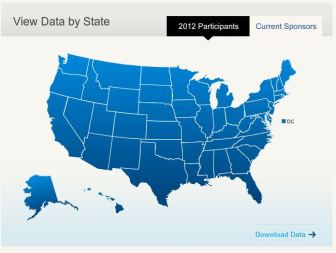 The J-1 visa program is for cultural exchange visitors. This interactive map shows how many J-1 visitors there are in each state.

Student and exchange visitor program quarterly reports: shed light on national program numbers, including how many certified schools there are.

The Chronicle for Higher Education: is a resource for college and university news around the country.

In addition to the resources on visas, Houston said reporters should consider using Document Cloud, which allows individuals to share, link, annotate and view documents online.