Miguel Keberlein Gutiérrez, supervisory attorney for the Illinois Migrant Legal Assistance Project, discussed the most common work visas in the United States during his session a Midwest Center for Investigative Reporting workshop on April 11.

The workshop, “Covering the U.S. Visa System in Your Own Backyard,” was at Columbia College in Chicago and included more than two dozen journalists from all over the country.

There are a handful of different visas workers can use to enter the United States:

Keberlein Gutiérrez said a lot of people see the H-2A visa as a continuation of slavery in the United States. 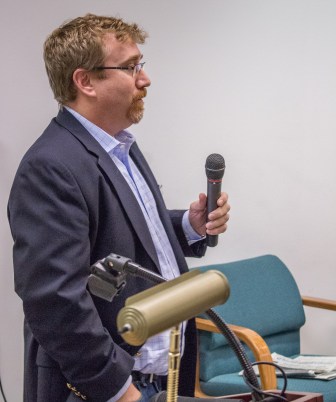 Miguel Keberlein Gutiérrez works for LAF in Chicago. Here, he talks about work visa programs on April 11, 2015 at a Midwest Center for Investigative Reporting workshop in Chicago.

“The workers don’t have any transportation. They don’t know where they are, [and] most of them aren’t going to speak English,” he said. “A company now has a group of workers that they can treat any way they want.”

To find workers, employers connect with federally licensed labor contractors who recruit workers. That recruiting systems works like the plantation system used to work, according to Keberlein Gutiérrez. Recruiters frequently are penalized for abusing the system and are listed online in a debarred list.

The government mandated migrant farm workers must be paid at least minimum wage in the 1970s. Even so, today, they are still not paid overtime.

“When you look at the fields, there are no time clocks out there,” he said. “So the employer has every incentive to cut a few hours off of people’s time.”

There is a three-fourths rule for H-2A workers where, if the contract gets cut short for any reason, the worker is supposed to get paid for three-fourths of the amount promised. Keberlein Gutiérrez said no one is enforcing the rule, and many visa workers leave with much less than expected.

“If you eat food, there’s a good chance you have helped human trafficking in some way,” he said.

During his workshop session, Keberlein Gutiérrez told the story of an H-2A farm worker from a small town in Mexico. The worker, Humberto Casarrubias Sanchez, came to Illinois in the summer of 2011 to detassel corn. Married with three daughters, he spoke no English, according to Keberlein Gutiérrez.

One hot summer day – with temperatures that reached a high of 120 degrees – he was sent to work on a field 85 miles away from the motel where he and his family stayed.

Sanchez never made it back to the motel.

Police searched for a day and then called off the search because, as Keberlein Gutiérrez said, they figured he must have just run off to live in the United States.

Keberlein Gutiérrez and his team received a phone call from Sanchez’s family, and the following day convinced police to reopen the search.

The team found out there was a new crew leader the day Sanchez went missing, and he sent people into the wrong rows, away from an exit.

The worker’s body was found two and a half months after he went missing. Defense lawyers are arguing it is unclear if Sanchez died because of heat exhaustion.

The case is still pending.