The cities of San Jose, Calif., and Spokane, Wash., have filed lawsuits seeking damages associated from chemical pollution allegedly caused decades ago by a former version of the agribusiness giant Monsanto.

Two public nuisance lawsuits claim the seed company should be on the hook for water contamination costs related to dangerous cancer-causing chemicals known as polychlorinated biphenyls, or PCBs, from when the company was under different ownership and produced industrial chemicals.

“The extent of PCB contamination is troubling because PCBs cause a variety of adverse health effects,” the San Jose complaint states. “In humans, PCB exposure is associated with cancer as well as serious non-cancer health effects, including effects on the immune system, reproductive system, nervous system, endocrine system and other health effects.” 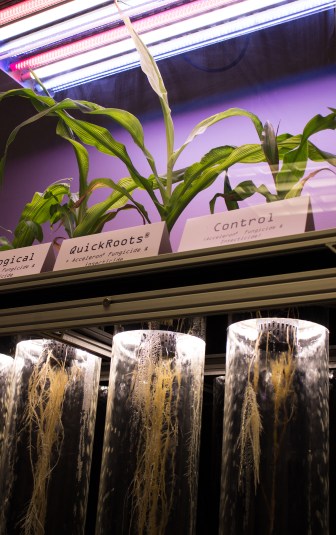 In the past, "Old Monsanto" produced industrial chemicals, food sweeteners and other products. Today, the St. Louis-based company focuses on agriculture. Some of its latest research seeks to use microbial technology to boost plant health, an idea demonstrated here on July 20, 2015.

PCBs are artificial mixtures of different compounds that look like oily liquids or solids with a colorless to light yellow appearance, according to the U.S. Centers for Disease Control and Prevention’s Agency for Toxic Substances and Disease Registry.

In the past, companies used PCBs as coolants and lubricants. They were used in old florescent lighting fixtures, paints, plastics, paper, rubber products and dyes.

The mixtures are odorless and tasteless, making them difficult to remove from the environment once introduced.

Monsanto was the main manufacturer of PCBs in the United States from 1935 to when the U.S. government officially banned them in 1979.

The complaint filed by the City of San Jose dated July 8 describes that the city operates a municipal storm water system that discharges into the San Francisco Bay.

Because of heavy chemical pollution, San Jose officials have had to limit water going into the bay.

In attempts to send more water into the bay, the city has spent money in effort to reduce the PCBs in its storm water.

“Monsanto is responsible for creating the public nuisance by manufacturing, distributing, and promoting PCBs, resulting in contamination in and around the Bay,” the complaint states, which also alleges that Monsanto was well aware of PCBs’ harmful consequences.

In an interview with San Jose Inside, Monsanto spokesperson Charla Lord said the company is reviewing the lawsuit and its allegations.

“Monsanto is not responsible for the costs alleged in this matter,” she said. “PCBs sold at the time were a lawful and useful product that were then incorporated by third parties into other useful products. If improper disposal or other improper uses allowed for necessary clean-up costs, then these other third parties would bear responsibility for these costs.”

The City of Spokane’s lawsuit against Monsanto dated July 31 is similar to San Jose’s complaint, alleging that the company directly caused the Spokane River to have elevated levels of PCBs.

“Monsanto was grossly negligent because it failed to exercise even slight care,” it states.

Both lawsuits do not disclose the compensatory damages they seek, but Spokane officials estimate the cost of treating the Spokane River exceeds $100 million.

The lawsuits follows a strong 2015 third quarter performance for the seed company, as June financial filings show it netted $1.14 billion, an increase of 32 percent compared so the same period a year earlier.

Visitors stand outside the entrance to Monsanto's Chesterfield Village research facility on July 20, 2015.

Today, the St. Louis-based Monsanto is solely focused on agriculture.

But when John F. Queeny founded what some in the agriculture industry refer to as “Old Monsanto” more than a century ago, the company was involved in a wide variety of businesses, including the manufacturing of food sweeteners, PCBs and other chemicals.

“Monsanto today, and for the last decade, has been focused solely on agriculture, but we share a name with a company that dates back to 1901,” Lord told San Jose Inside.

A few years after Queeny founded Old Monsanto, the company got a business boost from a major customer in the Coca-Cola Company, which used saccharin as a sweetener.

Old Monsanto eventually entered into the agriculture business in the 1940s with its product Santobane, an insecticide that targeted corn borers. During this time, the company also came out with the chemical 2,4D.

An official agricultural division was established in 1960.

In 1976, Monsanto’s flagship herbicide, Roundup, was commercialized in the United States.

In 1997, Old Monsanto splits its industrial chemical and fibers branch into Solutia Inc., one of the companies named in the recent lawsuits.

A pivotal point in the company’s history came three years later in 2000 when Old Monsanto enters into a merger and becomes a subsidiary of Pharmacia Corporation, a company now wholly owned by Pfizer Inc.

In 2002, a new Monsanto spun off from Pharmacia and became a separate company, the business it is today.