The announcement comes about a week after a mega deal that would have combined Syngenta with St. Louis-based Monsanto fell apart.

The American seed giant said on Aug. 26 that it would walk away from a roughly $47 billion dollar bid to combine its seed inventory with Syngenta’s robust chemical portfolio. The decision ended a publically bitter ongoing saga between the companies that left some Syngenta shareholders disappointed, according to reports. 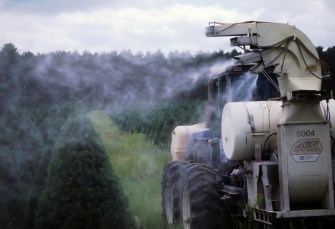 Machinery sprays pesticide on rows of Christmas trees at a tree farm near Wautoma, Wis.

“U.S. growers can expect a step change in disease control from our range of Solatenol products,” said Davor Pisk, Syngenta’s chief operating officer, in a statement. “These valuable tools demonstrate our commitment to producing sustainable innovations that help growers combat diseases while maximizing their returns.”

Solatenol is a fungicide that has been proven effective against soybean rust, a serious disease that has caused crop losses in more than 100 countries, including the United States. Also known as Asian soybean rust, the disease is caused by two types of fungi and can be spotted by small unusual brown-colored spots on leaves.

A fungicide is a particular type of pesticide that targets disease-causing fungi.

Wade Cowan, president of the American Soybean Association, recently expressed his organization’s support of the Syngenta product in a letter to the EPA. In the letter, he stressed the need for new disease-managing options, while noting that soybean rust has already been spotted in Louisiana, Florida and Texas this year.

“Soybean rust remains a threat in the United States, and farmers are not complacent about its danger,” he said.

The American Soybean Association has more than 22,500 farmer members throughout 30 states.

The disease-controlling product will likely be available to U.S. farmers during the 2016 growing season, according to Syngenta. It sees the fungicide as having a worldwide sales peak at an estimated $1 billion.

Before achieving that peak potential, though, the fungicide will need to be approved in several international markets, including the European Union.

Annual financial filings show that Syngenta’s fungicide sales increased by about 16 percent from 2013 to 2014. The company attributes the increase to the success of ELATUS in the Brazilian agricultural market.

Syngenta earned $1.6 billion last year for its fiscal year ending Dec. 31, according to the filings.

EPA is authorized to register pesticides under the Federal Insecticide, Fungicide and Rodenticide Act, though states may impose their own restrictions, as well. Stemming from that authority, pesticide producers are required to register or license their product through the EPA.

If the EPA finds that a pesticide meets its criteria and enough data exist to support those findings, the pesticide up for registration is “unconditionally” approved.

If the EPA thinks a pesticide meets the criteria but data is lacking, the agency can approve it on a lesser “conditional basis.” When a pesticide is conditionally approved, the companies that produce them are tasked with providing additional evidence to support its safe use.

Lastly, the EPA can flat out deny a registration request.

A Government Accountability Office investigation determined that the agency has let thousands of unproven pesticides stay on store shelves for years because of agency mismanagement. The watchdog service’s 2013 report on the investigation found the EPA had thousands of pesticides that had been granted the lesser conditional status and held that label for as long as two decades.