While Latinos make up less than 4 percent of Missouri’s population, the number of Latino residents in the state grew nearly 80 percent between 2000 and 2010, according to the U.S. Census Bureau.

However, the number of Latino Missourians who are migrant farmworkers is unclear, as the number changes seasonally and has not been studied as thoroughly as other populations. Not all Latinos in Missouri are migrant workers, but the majority of migrant workers are Latino, predominately from Mexico and Puerto Rico.

For a migrant worker in Texas’ $25-billion agriculture industry, weekly pay can be less than $300, and workers are often responsible for their own rent and utilities. That has led to many migrant workers traveling from Texas to Missouri, where they can get better benefits.

For many families, acclimating to a new environment can be challenging, especially because of misconceptions, according to Gretchen Green, who most recently worked as an education coordinator at the Migrant Farmworkers Assistance Fund.

Green, a former college history professor, often acts as a liaison between agencies and migrant worker families. That includes working with families to get their children enrolled in local school districts in areas they work.

One couple Green worked with wanted to enroll their U.S.-born child in kindergarten, but they wouldn't leave the car and enter the school until Green assured them their family wouldn’t face any discrimination or harassment based on their background as immigrants.

After Green convinced the family to enroll, one of the parents asked her if she thought the child “will get in” to the kindergarten program.

“That is one example of the fear climate,” Green said.

And those fears have only grown, she said.

Green is concerned that nationalistic rhetoric against immigrants, and particularly those from Mexico, may intensify fears among workers and discourage them from speaking up and seeking help. 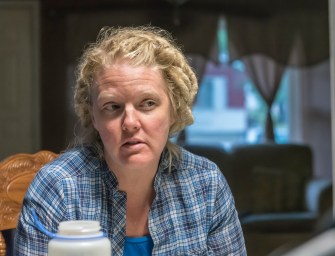 Another father asked her recently if Republican presidential nominee Donald Trump would be able to take away the U.S. citizenship of his children, Green said.

Throughout his campaign, Trump has described recent Mexican immigrants as “criminals” and “rapists,” questioned the professional abilities of U.S. born citizens with Mexican heritage and talked with other GOP leaders about ending birthright citizenship, citing as reason Mexican and Asian “anchor babies,” immigrants’ children born on U.S. soil.

She said the area near Lexington where she helps many families was the site a bloody three-day Civil War battle in 1861 where locals wanted to keep slavery legal.

“I think there is a holdover mentality from the pre-Civil War area plantation [era], and that may seem a little extreme, but I really do feel there is some of that that lingers in that area, which did have plantations that used slaves,” Green said.

Many families move from California, Texas or Mexico for more opportunities and safer living conditions in Missouri’s agricultural fields and factories.

Many farms straddle both Missouri’s Interstate 70 — which connects the state’s two most populous cities, Kansas City in the west and St. Louis in the east — and the nearby Missouri River. Those farms ultimately attract migrant workers seeking employment opportunities during late spring and into early winter.

But relocating to Missouri can present many precarious challenges. 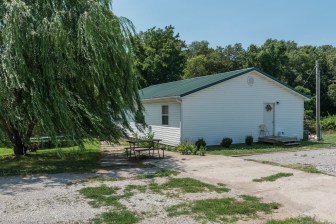 Migrant housing at an orchard just outside of Waverly, Missouri, on June 22, 2016.

For many migrant farmworkers, it only takes one injury, one spat with a boss or one bad season to send a family into homelessness or deep poverty.

And sometimes, if a job doesn’t work out, the trek of hundreds or even thousands of miles back to their original home takes migrants to a place they no longer feel is home.

Ensuring that migrant workers in Missouri get fair treatment is what drives Green and Erin Bartling to advocate on their behalf. Bartling is the project director of The Migrant Farmworkers Project for Legal Aid of Western Missouri.

Both Green and Bartling’s organizations are based in Kansas City, the closest metro area to the orchards and farms that dot the Lexington area. They each visit the year-round or seasonal laborers in Lexington while also maintaining their relationships with farm owners in order to access the workers.

Bartling, 34, is a St. Louis native. She started working with migrant laborers 10 years ago when she began enrolling the children of migrant workers in school, driving laborers without transportation to medical appointments and offering translation services to workers.

Bartling, a petite blonde with dreadlocks, no Latino heritage and who speaks Spanish fluently, admits she gets bewildered looks from people.

She became interested in the work when she was required to take a foreign language in high school and chose Spanish. A love for the culture led to a degree in anthropology and Latin American Studies and, later on, a career at Legal Aid.

When Bartling shows up at the doors of migrant workers, they greet her with smiles and hugs as if she is one of the family, she said.

“She knows everything about us,” said farmworker Sara Ruiz, after half-laughing, half-chastising her husband for nonchalantly taking off his shirt to show Bartling a scar from his last job. “She is my confidante, my priest.”

The farm workers’ children often recognize her, Bartling said, and ask her to join games or play with their toys.

“There’s definitely one thing I’ve learned in this work: There is no clear-cut definition of who a migrant worker is," she said. “… It encompasses a variety of scenarios. There are some single men who travel around to different locations to find work. In this area, in the Midwest, it is very common that people travel with their families, which varies from other parts of the country. So that brings a different dynamic.”

The diverse population Bartling serves often creates a variety of citizenship statuses within one family, and that can create unique challenges. Some family members could be U.S.-born or naturalized citizens, while others could be under deferred action or lack papers. Bartling said that she can’t serve migrant workers without papers per funding rules her organization must follow.

Some migrant workers say they stay in agricultural work because it’s all they’ve ever known growing up on farms. Others see farm jobs as a means to eventually find a more stable way of living or make just enough for their children get into college who can have access to a better quality of life.

Some have left to work as mechanics or janitors but returned to work in the field, sometimes justifying it as a desired tether to their upbringing, evoking spirituality in feeling more connected to nature and perhaps seeing God in it.

Gabriel and Sara Ruiz, husband and wife, were neighbors who fell in love and moved from Michoacán, Mexico, to California in the early 1990s to work on farms with hopes of realizing the American Dream. They brought with them their two children, Gabriel Jr. and Maria.

Mexico isn’t home anymore for Agustín Chavarria — Lexington, Missouri, is. Chavarria grew up on farms in Coahuila, a Mexican state situated on the United States-Mexico border.  In 1990, when he was 16, Chavarria came to the States to make a better living by working in agriculture and as a mechanic in Texas’ Rio Grande Valley.

Newlyweds Alvaro Porras Loza and Maricruz Martinez Hernandez moved in early June from the Kansas City area to work the farm fields of New Haven, a town that hugs the banks of the Missouri River and stationed about an hour west of St. Louis.